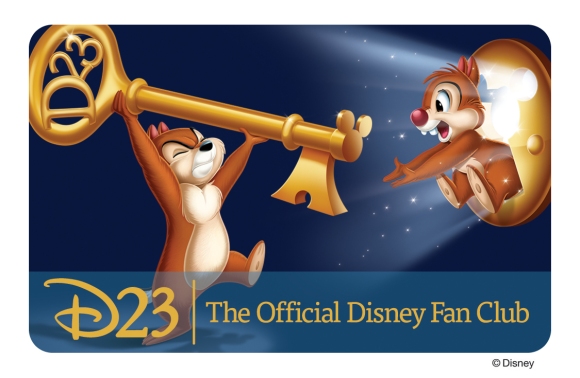 D23: The Official Disney Fan Club, will launch a massive reimagining of its D23.com website, opening up the wonderful worlds of Disney like never before to its members. The site will provide access to newly digitized content that delves deeply into The Walt Disney Company’s vault of material, past and present, along with exclusive glimpses of the future. The new gated content will be free to current D23 Members; plus D23 is launching a new free level of membership, which will include access to this incredible content. D23.com will continue to offer the latest Disney news free to all guests who visit the site. But D23 Members can unlock even more magic in each section by logging in and accessing content whenever a golden key is shown.

– 23 Questions – We enhance our popular feature with audio interviews with Once Upon A Time star Ginnifer Goodwin who reveals her Disney favorites—and what she’s looking forward to in the next season of the hit ABC show. Plus an exclusive with Phineas and Ferb’s popular “evil mastermind” Dr. Heinz Doofenschmirtz, who talks about his truly devious plans… and Christmas.

– D’scovered – Treasures unearthed by the Walt Disney Archives. In the coming weeks the Archives will share extremely rare imagery from the proposed Mickey Mouse Park, a concept which evolved into Disneyland; spine-tingling alternative dialogue for the Haunted Mansion penned by Disney Legend X. Atencio; the illustrated story script for “The Karnival Kid,” the 1929 short in which Mickey Mouse first speaks; and a very special memento created for Walt by legendary artist Salvador Dali.

– Disney A to Z – A complete and newly-updated electronic version of the definitive Disney encyclopedia with more than 7,000 entries written by Dave Smith, founder and Chief Archivist Emeritus of the Walt Disney Archives.

– D23 Presents – A deeper dive into all parts of Disney from the opening of Mystic Manor in Hong Kong Disneyland to rarely seen footage of the former Disney Studio on Hyperion Avenue.

– Disney Legends and the Walt Disney Archives – Two new microsites; Disney Legends will provide a deeper look at those who’ve made significant contributions to the Disney legacy, and the Archives site will open up the doors of this venerable institution so D23 can share more of The Walt Disney Company’s expansive collections.

In addition, new departments and sections include: Weird Disney, looking at some of the more unusual and outrageous pieces of Disney’s past; Characters, profiling the most beloved characters from television, film and comics with concept art and complete biographies; The Quotable Walt Disney, a digitized version of the out-of-print book featuring some of Walt’s most enduring words; Ask a Legend, a video feature in which Disney Legends like Marty Sklar answer fans questions; First Look, which gives members a glimpse into what’s new and what’s next including Monsters University; Attraction Rewind, celebrating the beloved attractions of Disney’s past which once delighted theme park guests; and Muppetology, which opens up the Muppet-acular universe of our fuzzy friends. D23’s popular video series Armchair Archivist and Disney Geek will also return with all-new episodes.

And that’s just the beginning—on launch day, D23.com will reveal even more surprises.

D23 Free Membership will include:

– Subscription to Weekly D23 FanFare E-newsletter with breaking news and special offers. (You may opt out of receiving FanFare after your first e-newsletter arrives.)