MONDO To Release The Guardians of The Galaxy Soundtrack On Vinyl

MONDO, under license from Marvel Music and Hollywood Records, unleashes the cooler than cool 1970s soundtrack on vinyl from the blockbuster hit space adventure, Marvel’s “Guardians of the Galaxy.” Pre-order for this deluxe vinyl package begins today and will be available for sale on MondoTees.com for $50.

The cover artwork from artist Tyler Stout is an appropriately epic collage of misfits featuring the instantly iconic heroes and villains of the summer’s most beloved film. Tyler Stout continues his stellar work for Marvel films that began with Marvel’s Iron Man and has continued throughout the ever-expanding Marvel Cinematic Universe. 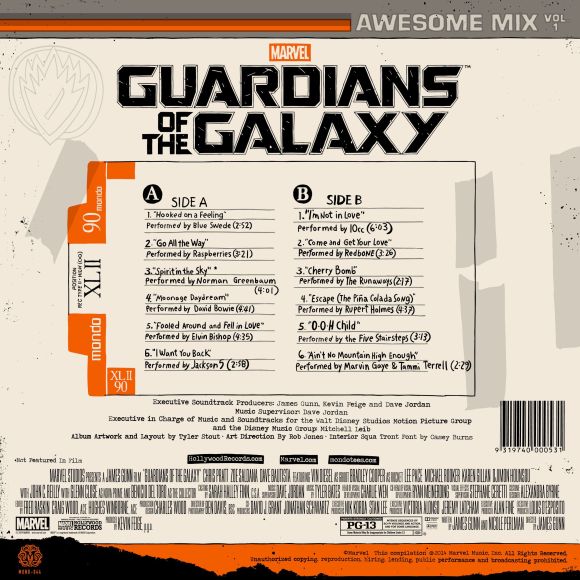 Available for pre-order, MONDO is pleased to present a deluxe vinyl release of the Guardians Of The Galaxy: Awesome Mix Volume 1 soundtrack featuring original artwork by Tyler Stout. What makes this release deluxe, beyond Tyler’s amazing artwork, is that every copy comes pressed on 180 Gram Purple Infinity Stone colored vinyl, and this is Mondo’s very first screen-printed album packaging.

Printed by D&L Screenprinting, each jacket will have the look and feel of a Tyler Stout screen-printed poster. Also, as an additional bonus, each record comes with one of nine randomly inserted screen-printed handbills featuring various characters from the film.

Because of the hand-done nature of this project, both in the vinyl and packaging, we do not expect these to begin shipping until Early 2015. Please note that this is a pre-order before purchasing.