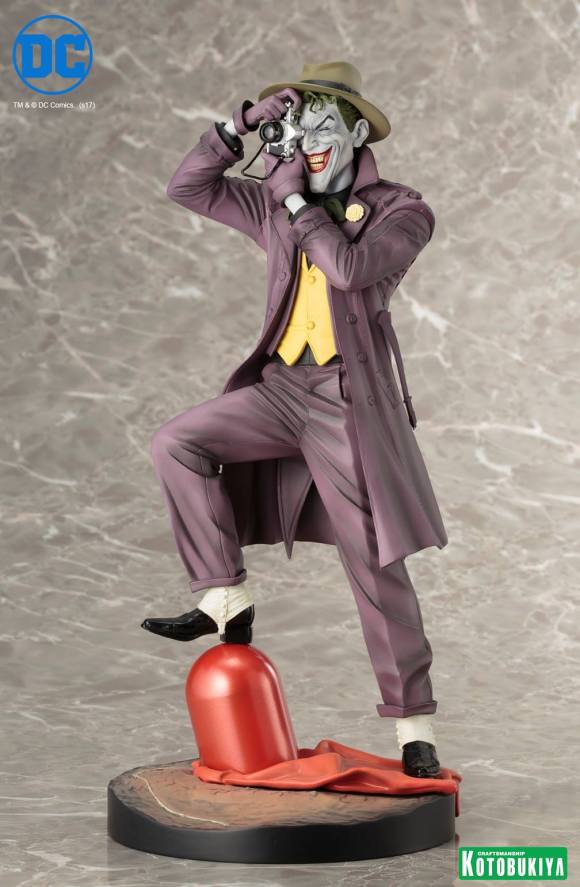 Kotobukiya has posted photos and details for an updated version of an older statue. They have refined their DC Comics The Joker – Killing Joke for an all new Second Edition ARTFX Statue. The statue is based off the iconic cover by Brian Bolland. It will include a Red Hood themed statue base as well. Here are more details from Koto:

A Kotobukiya Japanese import! Kotobukiya returns to the DC Universe ARTFX Statue series with a new edition of a previously released classic. The Clown Prince of Crime is back in an updated (and streamlined) new version with The Joker -Killing Joke- 2nd Edition! A 1988 graphic novel by Alan Moore and drawn by Brian Bolland, The Killing Joke is a story about Joker and how he came to be. Other than an interesting origin story for him, the book also features one of the most famous scenes in the history of comics: Joker shooting Barbara Gordon (which would in turn lead to her becoming the hero Oracle). Almost as famous as its contents is Killing Joke’s iconic cover image, and this 2nd Edition statue replicates it with new features and a simplified presentation. 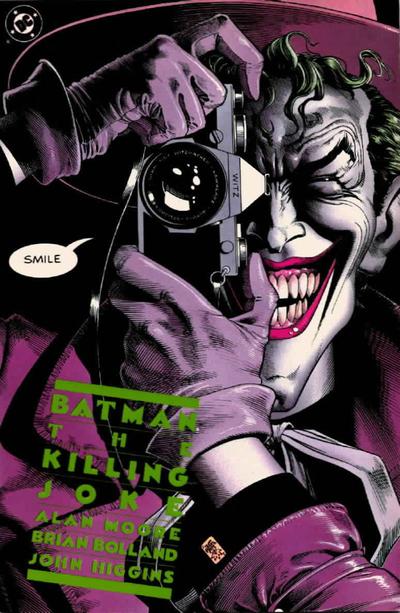 Featuring a portrait inspired by the graphic novel cover art coupled with an original pose by Kotobukiya, this statue brings the maniacal clown to life that’s sure to please any DC Comics reader. In this new edition Joker stands on the helmet and cape of the original Red Hood, smiling his huge toothy grin as he snaps a photo on his old school film camera. The sadistic villain’s costume is incredibly detailed, showing off every seam, cuff, button, crease, and more on his purple three piece suit and trench coat. His outfit is even topped off by authentic studded spats, fedora, iconic white gloves, and lapel-pinned flower. The Joker’s elongated white painted face leaps right off of the graphic novel cover with its deep laugh lines, left eye squeezed shut, and unruly green hair peeking out from under his hat. This 2nd Edition does not include the original light-up gimmick, but Joker fans will love the subtle nod to one the villain’s alter ego’s literally at his feet!

The Joker -Killing Joke- 2nd Edition stands 12 inches tall (1/6th scale) on his special updated display base featuring the Red Hood costume. The Joker is an incredible statue capturing one of the most famous graphic novels of all time, and he’ll look great on display or alongside other DC Comics-inspired statues from Kotobukiya like the Batman Black Costume version.

Look for the statue to be released in June. You can pre-order it HERE for $99.99. 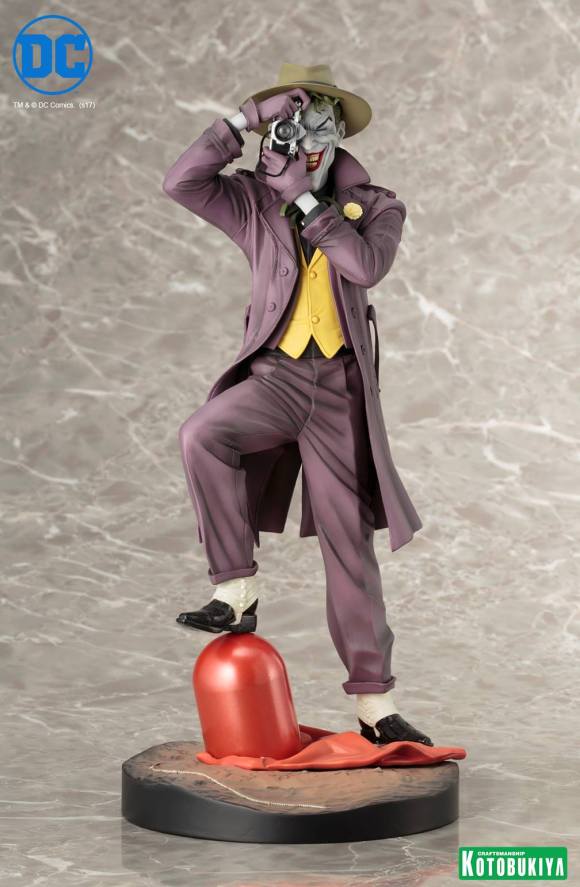 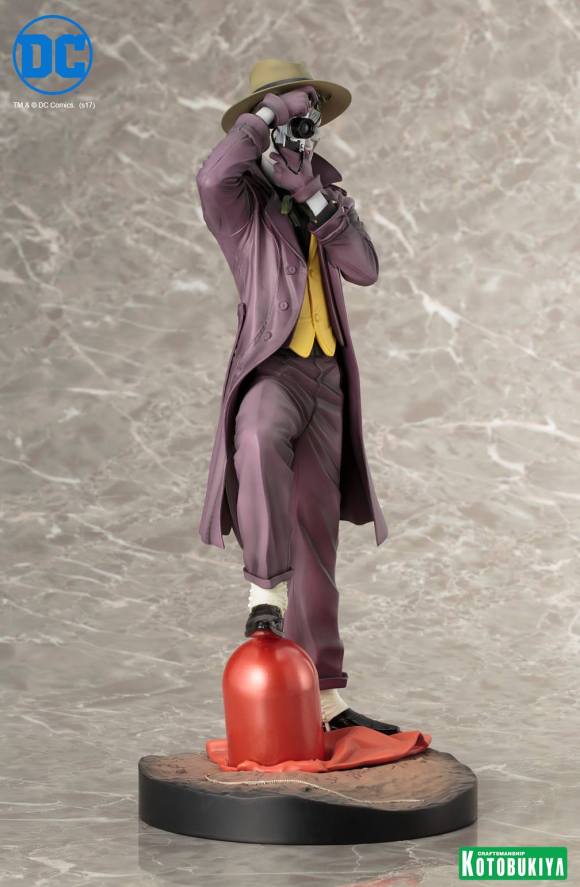 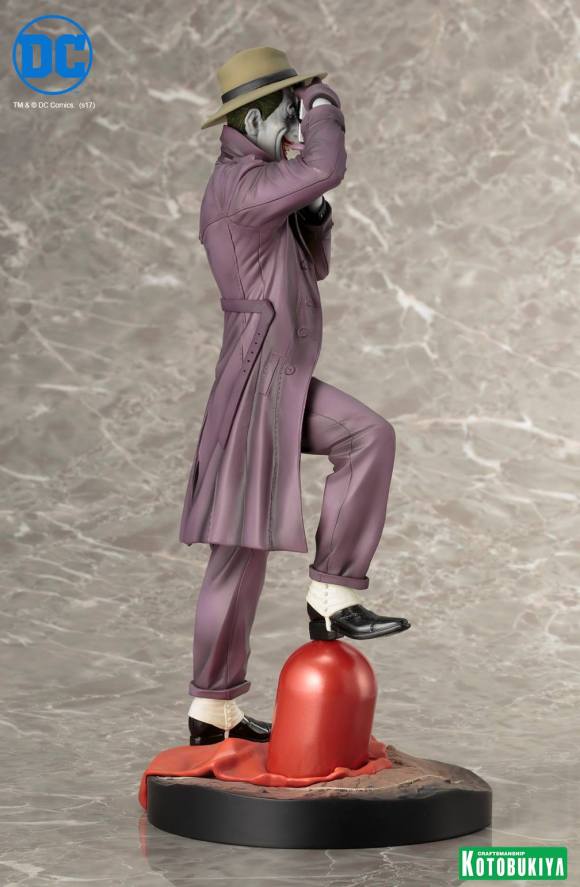 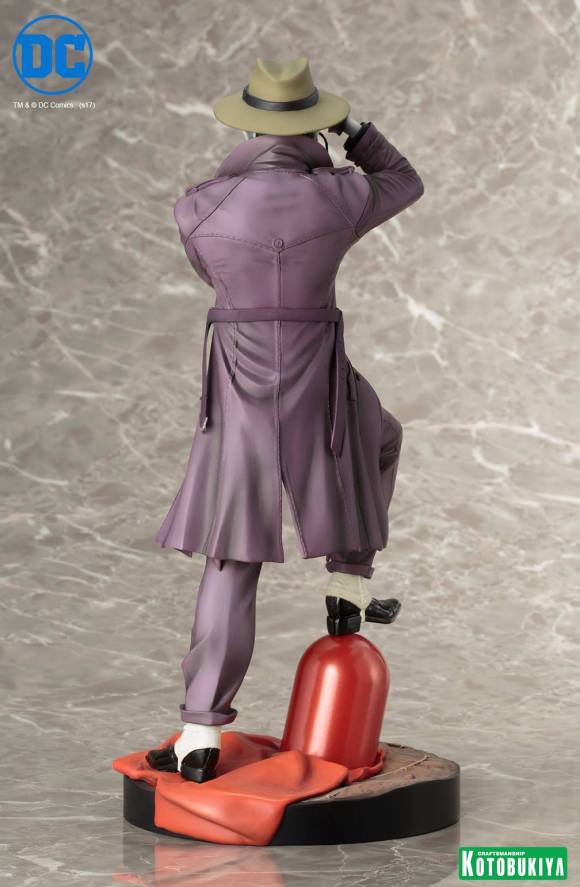