Testament that with LEGO Technic you can build for real, this non-glued, fully-functional and self-propelled LEGO Technic model can fit two passengers inside and accelerate to over 20km/h.

Perfectly recreating the organic design lines of the world’s fastest production car – the iconic Bugatti Chiron – the LEGO Technic life-size model pushes the boundaries of what LEGO builders imagined was possible to build in LEGO elements.

The model is the first large scale movable construction developed using over 1,000,000 LEGO Technic elements and powered exclusively using motors from the LEGO Power Function platform. Packed with 2,304 motors and 4,032 LEGO Technic gear wheels, the engine of this 1.5 tonnes car is generating 5.3 horse power and an estimated torque of 92 Nm. Building a one of a kind LEGO Technic life-size car is one part of the task. Testing if it can drive is another. And what better location than the same place where the real Chiron was first tested – Ehra Lessien proving ground in Germany – a unique facility built to handle speed. 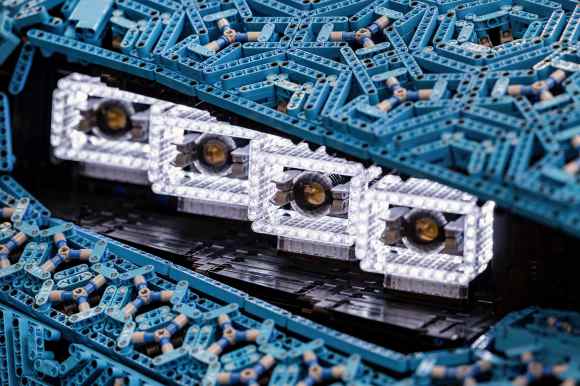 One weekend afternoon, the LEGO model took off and accelerated to everyone’s joy and amazement. And while it may not match the original Bugatti Chiron’s mindboggling 420 km/h speed, the LEGO Technic’s power function motors have managed the impressive performance to propel it to a little over 20km/h – ultimately making the ‘Build for Real’ idea truly complete.

Andy Wallace – the driver behind the LEGO Technic Chiron – former racing driver with multiple wins of the 24 Hours of Le Mans and Daytona, as well as many other races, and today official Bugatti pilot, said:

“When I first saw the LEGO Chiron, I was immediately impressed by the accuracy of the model and the minute attention to detail. In fact from about 20 metres away it’s not obvious that you are looking at a LEGO car. I can only imagine how much time and effort went into making this model.” “Driving the LEGO Chiron was a great experience, which I thoroughly enjoyed. All those years ago I could never have imagined that one day I would actually drive a LEGO car!”