Gal Gadot is waiting for the boosh. Eyes narrowed, bouncing lightly on her toes — float like a butterfly, sting like an Amazonian queen — she moves soundlessly through the chilled air of cavernous studio outside London, her shoulder blades blooming into a set of molten-gold wings.

When the explosion comes, it’s muffled, but the soldiers who emerge from the blast in full combat gear don’t look like they’re here to make friends. As she dispatches them one by one, it’s impossible not to imagine how many of them are experiencing the highlight of their working lives in this very moment: men who will spend the next 40 years telling every first date and airplane seatmate about that one time they were annihilated by the warrior princess of Themyscira.

“Ahhh, so uncomfortable!” Gadot says with a good-naturedly grimace after the scene finally wraps, shrugging off her shiny albatross and slipping into the plush gray robe and Ugg boots that wait for her just off stage. It’s the closest the 34-year-old onetime Miss Israel will come to uttering an uncheerful word, even after long hours spent in a wingspan that defies the natural laws of both orthopedics and most actual birds.

Endurance, though, is built into the brand: A months-long shoot has already hopscotched from the sunbaked Spanish cliffs of Tenerife to suburban Virginia and now back to the bone-chilling damp of England in early winter. On the set of 2017’s Wonder Woman, Gadot remembers, she and costar Chris Pine would sing Foreigner’s “Cold as Ice” to each other between takes to stay warm; in the follow-up, due June 5, the action moves from the grim grayscale battlefields of WWI to the neon era that birthed many a hair band — and the movie’s titular star, too.

“I was born in ’85, but it’s funny, I really do remember,” Gadot says in her lightly accented English, settling into a canvas-back chair steps from where she just brought a battalion to its knees. “Probably more so because of my parents, but it was a such a standout decade as much as it goes with fashion, music, politics. And the look of everything! The colors.”

If you had to pick just one from the palette, you might want to start with green: the color of money, of course, but envy, too. “In 1984, America was at the peak of its power and its pride,” says associate producer Anna Obropta. “Apple computers and parachute pants, wealth, commercialism, glamour, even violence — everything was larger than life. It was a decade of greed and desire, a time of ‘Me, me, more more more.’”

Read more of the Entertainment Weekly cover story HERE and pick up the issue on Friday, February 14. 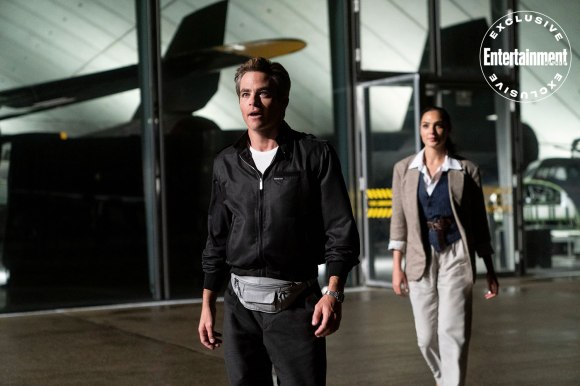