Set on a beautiful Summer day in a rural farming community as villagers gather to observe an annual ritual in the town square, The Lottery portrays most townsfolk as demonstrating a mob mentality who abandon all reason. Written immediately after World War II, Shirley Jackson’s story is a cautionary tale, depicting the dangers of following traditions without thinking of the consequences, and the dark side of human nature.

Upon its publication, The New Yorker received more mail over Jackson’s chilling tale than any work of fiction they had ever published. Readers cancelled their subscriptions, citing the story as too “gruesome,” “perverted,” and “outrageous.”

Today, Shirley Jackson’s The Lottery is heralded as a symbolic tour de force, and one of the greatest achievements in the art of short fiction.

This fine press limited edition of The Lottery by Shirley Jackson is presented in two states and is limited to two hundred and seventy-six copies. The edition measures 6” x 9” and features an exclusive introduction by Laurence Jackson Hyman, son of Shirley Jackson and four new full-color illustrations by award winning artist Miles Hyman, grandson of Shirley Jackson. This is the first stand-alone limited edition of The Lottery, and both editions are signed by Laurence Jackson Hyman and Miles Hyman. 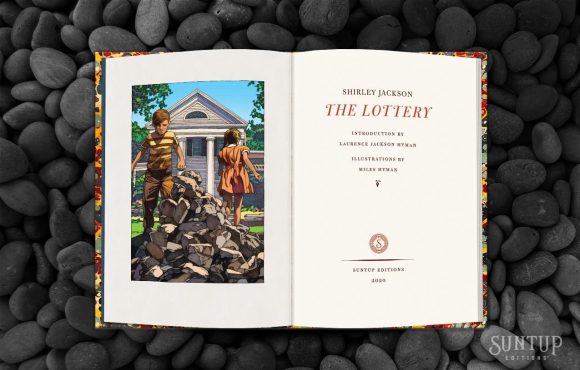 The Numbered edition of 250 copies is a full marbled paper binding with a printed paper spine label. The marbled paper is handmade exclusively for this edition. Endsheets are Hahnemühle Ingres and the edition is printed letterpress on cotton mouldmade Frankfurt Zerkall paper. The book is housed in a printed slipcase featuring artwork by Miles Hyman. ($350)

The Lettered edition is limited to 26 copies and is a Bradel binding with the front board covered in genuine shagreen stingray, and the spine and back board covered in black calfskin. Endsheets are hand marbled on acid free Fabriano Ingres. The edition is printed letterpress on handmade Twinrocker paper, our first edition to be printed on handmade paper; and is housed in a quarter leather clamshell enclosure with an Italian cloth cover. ($1,895)

The books will go on sale Saturday, April 18 at 9 a.m. PT.. Click HERE for more information.