Virgin Hyperloop made history last week as the first people successfully traveled in a hyperloop pod.

The testing campaign, from the beginning stages all the way through to the successful demonstration, was overseen by the industry-recognized Independent Safety Assessor (ISA) Certifer. Having undergone a rigorous and exhaustive safety process, the newly-unveiled XP-2 vehicle demonstrates many of the safety-critical systems that will be found on a commercial hyperloop system and is equipped with a state-of-the-art control system that can detect off-nominal states and rapidly trigger appropriate emergency responses. 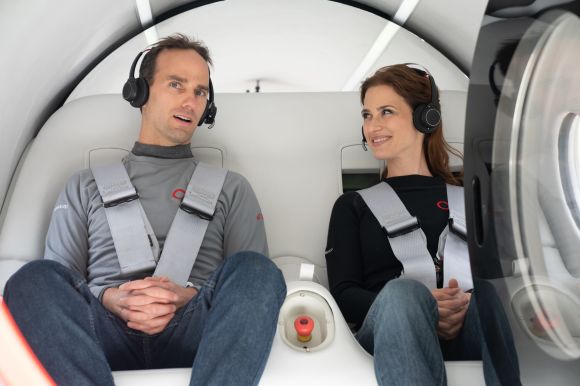 Josh Giegel, Co-Founder and Chief Technology Officer, and Sara Luchian, Director of Passenger Experience, were the first people in the world to ride on this new form of transportation. The test took place at Virgin Hyperloop’s 500 meter DevLoop test site in Las Vegas, Nevada where the company has previously run over 400 un-occupied tests.

The occupants made their maiden voyage on the newly-unveiled XP-2 vehicle, designed by Bjarke Ingels Group, which was custom-built with occupant safety and comfort in mind. While the production vehicle will be larger and seat up to 28 passengers, this 2-seater XP-2 vehicle was built to demonstrate that passengers can in fact safely travel in a hyperloop vehicle.

“Hyperloop is about so much more than the technology. It’s about what it enables – the trips you’d be able to take from Paris to Berlin, Lisbon to Madrid, or Warsaw to Prague,” said Sara Luchian, Director of Passenger Experience for Virgin Hyperloop. “To me, the passenger experience ties it all together. And what better way to design the future than to actually experience it first-hand?”

By combining an ultra-efficient electric motor, magnetic levitation, and a low-drag environment, hyperloop systems can carry more people than a subway, at airline speeds, and with zero direct emissions. With the goal to be safety certified by 2025 and begin commercial operations by 2030, the 100% electric Virgin Hyperloop system could play a key role in helping achieve the European Green Deal’s climate-neutrality objective.