With this online event you can purchase your favorite Disneyland Park 65th Anniversary items on July 14 beginning at 10 a.m. PT, while supplies last, to pick up at the Downtown Disney District from July 23 through 27 or have shipped directly to your home. 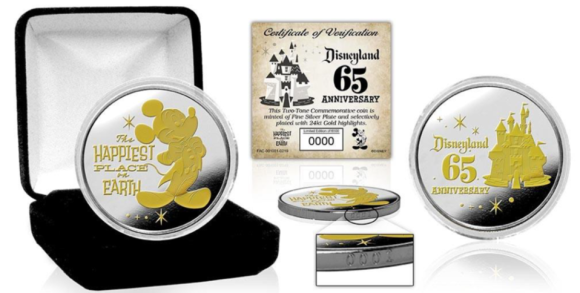 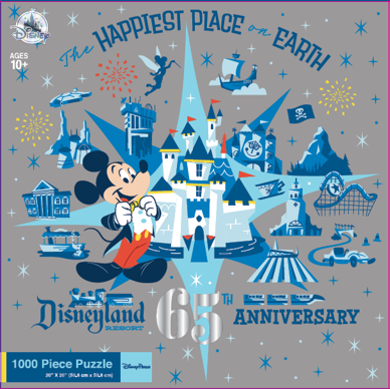 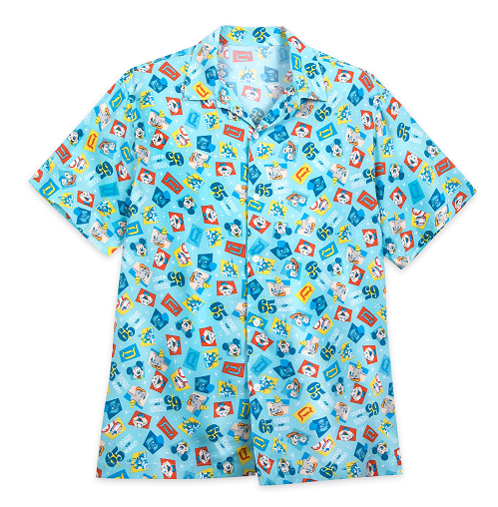 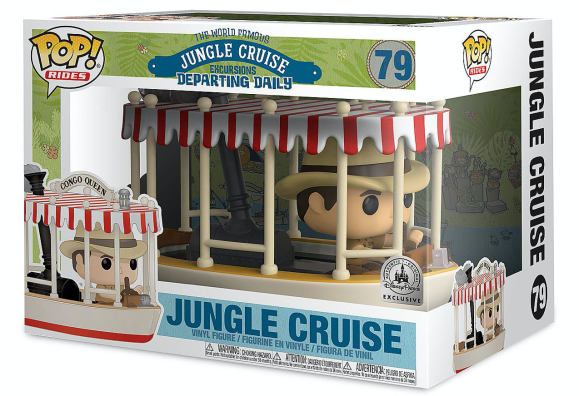 Excursions on the world famous Jungle Cruise will be departing daily from your collection when you add this vinyl figure based on the popular Disneyland attraction. Part of the Pop! Rides Vinyl series, it features the name ”Congo Queen” across the banner on top.

Today Disney Parks shared a first glimpse of a project Imagineers have been working on since last year. Splash Mountain – at both Disneyland park in California and Magic Kingdom park in Florida – will soon be completely reimagined. The theme is inspired by an all-time favorite animated Disney film, “The Princess and the Frog.”

We pick up this story after the final kiss, and join Princess Tiana and Louis on a musical adventure – featuring some of the powerful music from the film – as they prepare for their first-ever Mardi Gras performance.

Tiana is a modern, courageous, and empowered woman, who pursues her dreams and never loses sight of what’s really important. It’s a great story with a strong lead character, set against the backdrop of New Orleans and the Louisiana bayou. In 1966, Walt himself opened New Orleans Square when it became the first new “land” added to Disneyland park, so it feels natural to link the story and the incredible music of “The Princess and the Frog” to our parks.

The voice of Princess Tiana and Tony Award-winning actress, Anika Noni Rose, shared, “It is really exciting to know that Princess Tiana’s presence in both Disneyland and Magic Kingdom will finally be fully realized! As passionate as I am about what we created, I know the fans are going to be over the moon. The Imagineers are giving us ‘The Princess and the Frog’ Mardi Gras celebration we’ve been waiting for, and I’m here for it!”

The approach to retheming or “plussing” attractions (as Walt Disney referred to it) begins with Imagineers asking the question, how can we build upon or elevate the experience and tell a fresh, relevant story? It’s a continuous process that Imagineers are deeply passionate about. And with this longstanding history of updating attractions and adding new magic, the retheming of Splash Mountain is of particular importance today. The new concept is inclusive – one that all of our guests can connect with and be inspired by, and it speaks to the diversity of the millions of people who visit our parks each year.

Charita Carter, the senior creative producer leading the project at Walt Disney Imagineering shared, “Like Princess Tiana, I believe that courage and love are the key ingredients for wonderful adventures. I am delighted to be a part of bringing this fun-filled experience to our guests.”

For Imagineers, change is rooted in a tradition set by Walt Disney who encouraged new innovations, new ideas, new scenes and current storytelling. And the experiences they create can be enjoyed by guests who visit our parks from all over the world.

As part of the creative development process, conceptual design work is well underway and Imagineers will soon be able to conduct preliminary reviews and develop a timeline for when the transformation can start to take shape. 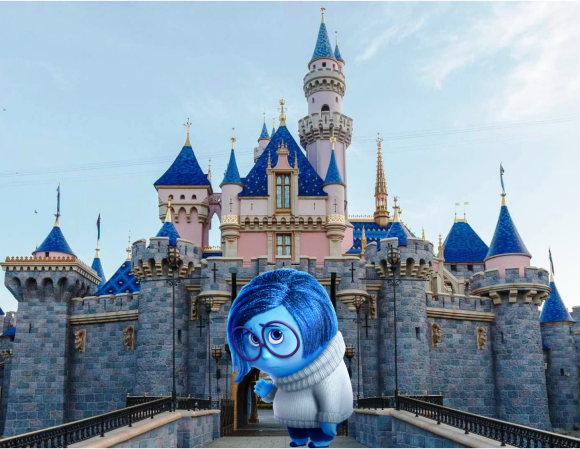 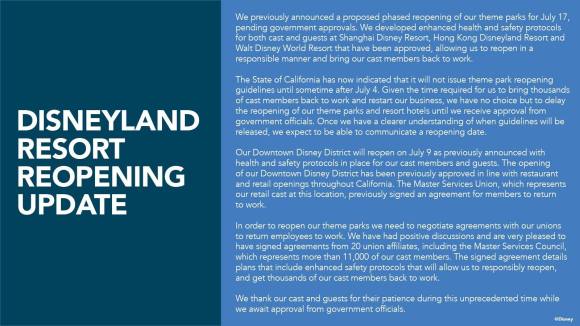 This Funko Haunted Mansion with Butler Pop! Town is a must have for fans of the classic Disneyland attraction. It comes packaged in a window display box. The Butler Pop! Vinyl Figure measures approximately 3 3/4-inches tall. 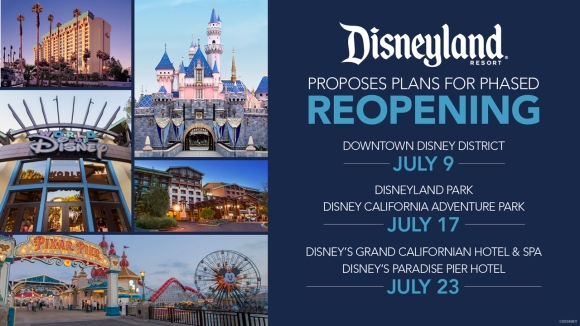 Sixty-five years to the date after the historic opening of Disneyland park, the beloved theme park is planning to open their gates once again on July 17, 2020, welcoming guests back to the Disneyland Resort.

Because theme park capacity will be significantly limited to comply with governmental requirements and promote physical distancing, the Disneyland Resort will manage attendance through a new theme park reservation system that will require all guests, including Annual Passholders, to obtain a reservation for park entry in advance. Theme park reservations will be subject to availability. More details about this new reservation system will be available soon. At this time, there will also be a temporary pause on new ticket sales and Annual Passport sales and renewals. Additional details will be available soon. Please check disneyland.com for the most current information.

Once approved, the Disneyland Resort will reopen with enhanced health and safety measures. In addition, a Guest Experience Team will be available throughout the parks and Downtown Disney District to assist guests with questions regarding these new policies.

Certain experiences that draw large group gatherings – such as parades and nighttime spectaculars – will return at a later date. While character meet and greets will be temporarily unavailable, characters will be in the parks in new ways to entertain and delight guests.

Pending governmental approval, Disney’s Grand Californian Hotel & Spa, Disney’s Paradise Pier Hotel and Disney Vacation Club Villas at Disney’s Grand Californian Hotel & Spa are planned to reopen to guests and members starting on July 23. Plans to support physical distancing as well as increased cleaning measures, along with a number of other health and safety protocols, will be implemented as part of the phased reopening of the hotels and the Vacation Club.

Downtown Disney District will begin reopening on July 9 in line with the state’s reopening guidelines, with its unique variety of shopping and dining experiences, including the flagship World of Disney store. With the health of guests and Disney cast members at the forefront of planning, several operational changes will be implemented based on guidance from health authorities to promote physical distancing and cleanliness throughout the Downtown Disney District.

Additional information on enhanced health and safety measures and operational changes for reopening locations will be shared soon. These policies are under continuous review and are subject to change as the Disneyland Resort monitors conditions and receives guidance from health and government authorities. You may have 999 Funko Pop! figures at home but there’s always room for one more!

Exclusively made for Disney Parks and shopDisney, you’ll definitely want to make room on your shelves for an all-new Funko Pop! figure featuring the Organist from The Haunted Mansion.

Additional Funko Pop! figures inspired by The Haunted Mansion are coming soon to shopDisney.com as well, perfect for any grim grinning ghost! 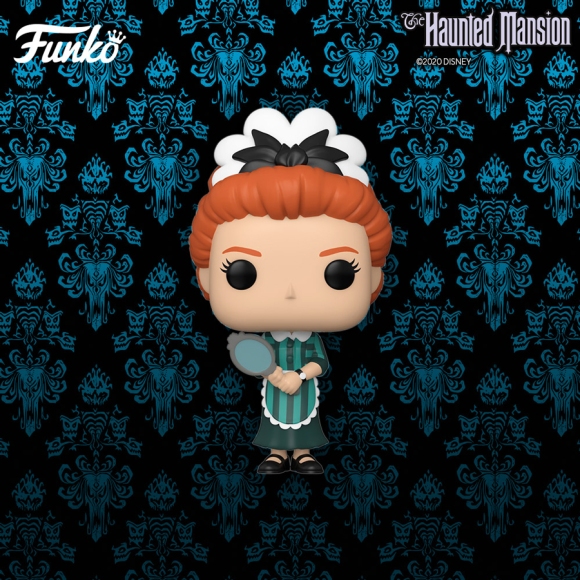 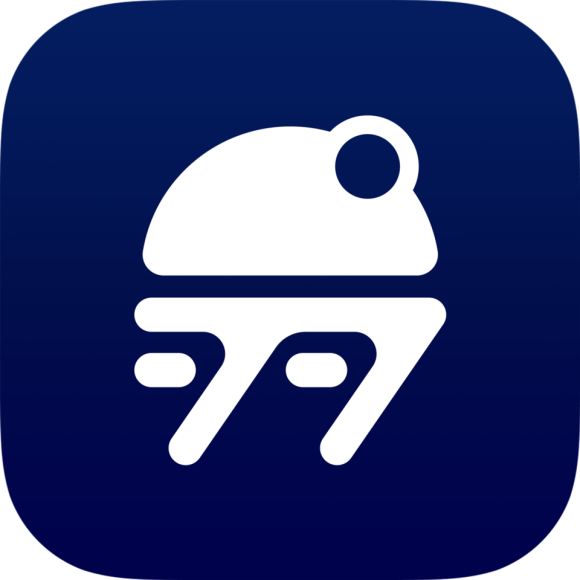 Bring your own Star Wars stories to life at home with the all-new Droid Depot mobile app. 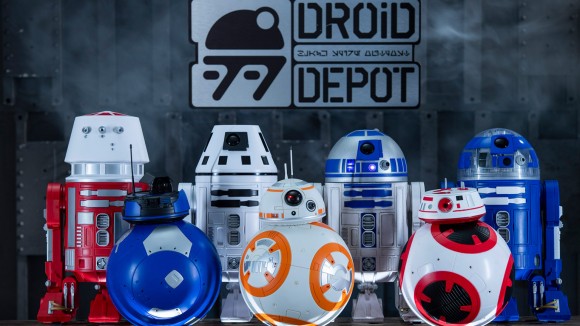 Available for free download on the App Store and Google Play, the app brings your custom BB-series or R-series astromech droid unit from Droid Depot at Star Wars: Galaxy’s Edge to life for new, at home adventures. Or use the app for an all-new virtual experience, by building a digital droid and creating a whole new virtual collection of counterparts.

With the app, you can sync up with your own Droid Depot astromech unit to program your droid, customize them by name, see their profiles, and pilot them on a virtual path around the house, activating sounds and maneuvers.

Get a taste of Oga’s Cantina when you choose your favorite galactic jams spun by DJ R3X and choreograph your droid to dance along.

Or try strategy mode, where you can play a game of tic-tac-toe with your droid in both easy and difficult modes.

Lots of great new merchandise is arriving at Avengers Campus when it opens in Disney California Adventure on July 18th.

Prepare for action-packed adventures around Avengers Campus! At this one-stop hero shop, new recruits will find everything necessary to accept important missions at a moment’s notice—like cutting-edge inventions and other up-to-the-minute swag developed by the Worldwide Engineering Brigade’s brightest minds. 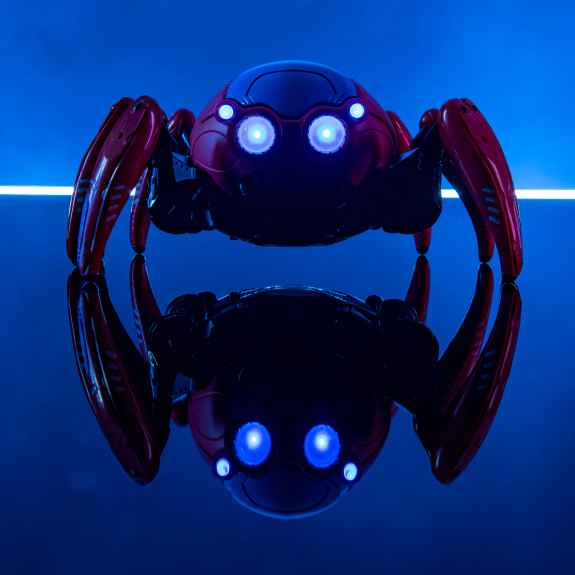 WEB members are particularly proud to offer access to some of their key prototypes, like the indispensable Spider-Bot.

These friendly robotic sidekicks feature combat and defensive modes that keep you in command when mayhem strikes—plus, Avengers-inspired tactical upgrades are available to transform your Spider-Bot’s overall appearance and enhance battle capabilities for a blast of custom fun.

Other mighty must-haves—including at-home kits to create your own spider webs, spider light goggles and a special, WEB-enhanced backpack to carry and display your Spider-Bot—let you unlock the power to continue your own heroic story anytime, anywhere!

You can also find parks-exclusive Funko Pop! figures of Spider-Man and Iron Man in his exclusive Avengers Campus Mark 80 suit.

For those who want to follow in Peter Parker’s and Bruce Banner’s footsteps, you can snag this WEB S.T.E.M Kit that you can use to make “gamma goo” and other experimental materials. 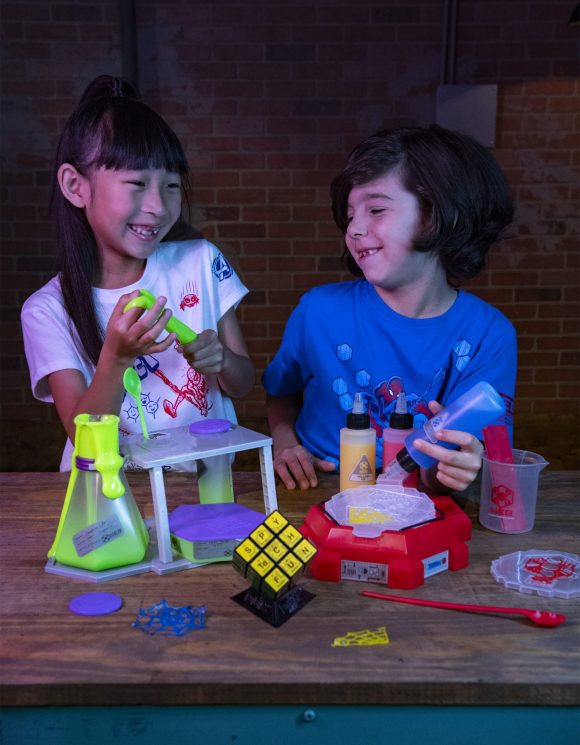 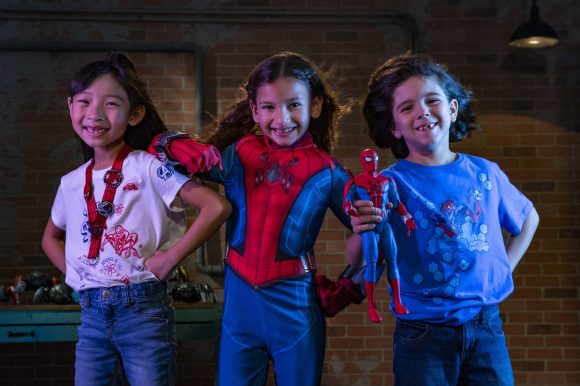 Campus Supply Pod is your one-stop-shop for dressing in your super-hero digs. They’ll have official Avengers Campus logo gear, such as fleece hoodies, shirts, hats, drinkware, and more! 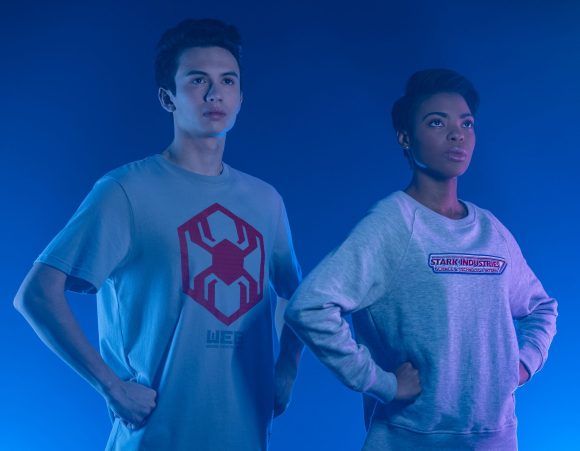 There will even be beaker-inspired mugs, pins, patches, and so much more.