Today, the World’s Greatest Detective arrived in Burbank, California, in the form of a colossal Batman statue based on the critically acclaimed Batman: Hush character design by world-renowned artist, publisher, and chief creative officer of DC, Jim Lee.

Brought to life by Visit Burbank in partnership with DC, Lee’s celebrated design from his 2002 Batman run was reimagined in 3D form by digital sculptor, Alejandro Pereira Ezcurra, and expertly crafted in bronze by the skilled artisans at Burbank’s American Fine Arts Foundry and Fabrication. The final statue measures seven-and-a-half feet tall and weighs 600 pounds.

Batman first appeared in Detective Comics #27 on March 30, 1939, and has stood as a symbol of determination, bravery, and justice to generations of fans for over 80 years. He has influenced every area of modern entertainment, appearing in countless comic books, Saturday morning cartoons, multiple television series, video games, theme parks and experiences, toys, collectibles, and apparel and lifestyle products, as well as blockbuster animated and live-action films.  Batman continues to be one of the most popular superheroes ever created—and, now, he is being commemorated in statue form by the City of Burbank.

The newly installed Batman statue can be viewed in the AMC Walkway of Downtown Burbank. Visitors are strongly advised to practice social distancing and wear a face mask.

Lee is standing next to his iconic signature and placing his foot on a Marvel Comics box that is on top of a comic book bin with the X-Men symbol on it.

Fans of Stan Lee or Marvel Comics will appreciate this masterpiece from Iron Studios. This limited edition polystone, hand painted statue will be released the second quarter of 2021 and retail for $160.

You can pre-order it HERE.

DC: Collecting The Multiverse: The Art of Sideshow

Delve into Sideshow Collectibles’ epic roster of DC Comics figures and sculptures with this deluxe book, which features insights from legendary artists and eye-popping photography.

Sideshow Collectibles is world famous for bringing DC Comics characters to life through remarkably realistic figures and highly expressive sculptures. From Batman and Wonder Woman to The Joker and Harley Quinn, Sideshow Collectibles allows the most iconic characters in all of fiction to leap from the page and screen right into our world.

In this deluxe book, key artists tell the story behind each extraordinary piece, revealing the design decisions and expert sculpting required to make the DC multiverse—from comics, film, television, video games, and beyond—into a reality. Packed with exclusive concept art and dynamic photography, this book lets you rediscover your favorite characters like never before.

Offering an entirely unique experience of the DC multiverse, this book is the ultimate tribute to Sideshow Collectibles’ incredible collection of DC figures and sculptures.

Pre-order the 296 page hardcover book HERE. It will be released on November 10.

Beast Kingdom presents the latest installment in the Master Craft series, which is loved by collectors around the world. The new piece is the Dark Night Memorial Statue, based on the Christian Bales’ Batman in the film The Dark Knight Rises. The statue realistically recreates Bruce Wayne donning the Batsuit. In order to save Gotham City from a nuclear bomb, Batman flew his personal flying machine, the Bat, out over the water with the bomb so that it could detonate away from the city. For his sacrifice, Gotham built a memorial of statue of Batman.

The Master Craft series continues its tradition of precision and beauty. Molded and painted by hand with great attention to detail, this statue is faithful to the film. Not only are the statue and platform extremely detailed, but they also exhibit a very realistic aging effect. This item is not to be missed by collectors and fans of Batman and the Dark Knight trilogy. Add it to your collection today!

The collectible stands over 17.5″ tall and iis scheduled to be released in the Third Quarter of the year. Pricing has not been announced at this time. 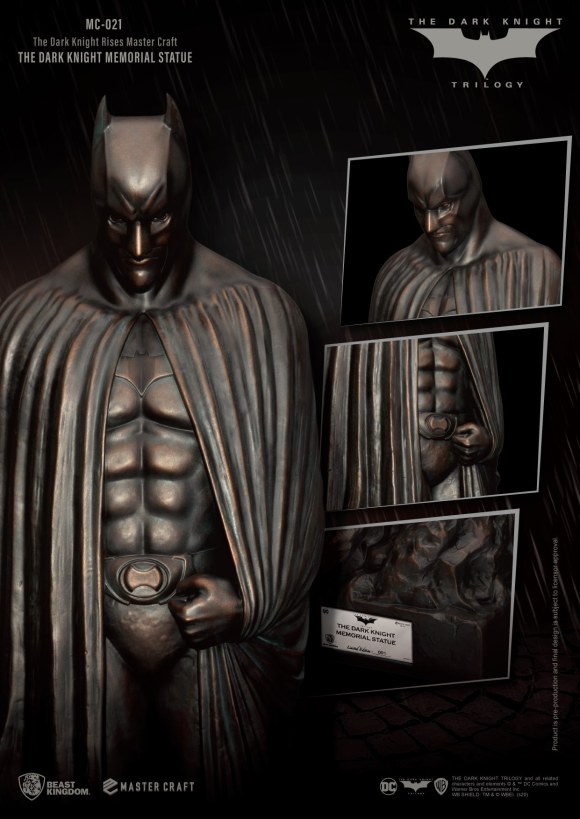 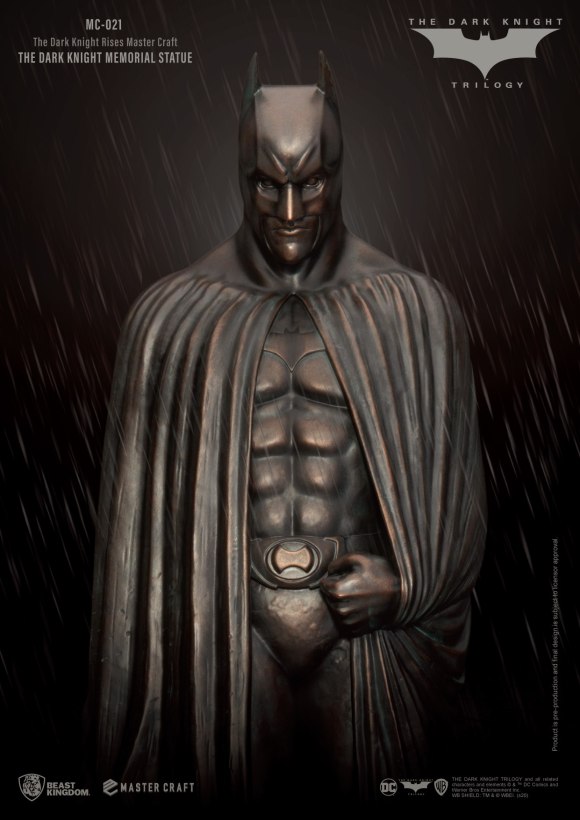 2020 has been a frustrating year for many people, and you can express that frustration with this Captain Picard collectible executing the hilariously famous facepalm maneuver.

This 8 inch scale mini bust paperweight is a larger version of the 2018 sold out 5 1/2 inch release with a modified right shoulder sculpt and a painted Starfleet insignia on the base.  Limited to only 1701 pieces, this exclusive Captain Picard mini bust paperweight is made of polystone, hand painted, individually numbered, and includes a Certificate of Authenticity.

Featured in the novel Red Dragon by Thomas Harris, the famous William Blake painting, The Great Red Dragon and the Woman Clothed with the Sun, is one of a series of paintings depicting various scenes from the Book of Revelation.

Suntup Editions will offer this highly limited handmade sculpture of the Great Red Dragon from the William Blake painting. This limited edition sculpture measures 8” tall and is crafted by sculptor Klaus Gaar using polyurethane resin at his workshop in Austria. Each sculpture is painted by hand, and is signed by the artist.

This edition is limited to no more than 50 hand numbered statues, and the final limitation is based on pre-order demand. This edition of the statue is made exclusively for Suntup Editions and includes a branded metal limitation sticker on the underside of the base. The sculptures are sequentially numbered, and we can only match your book number if it is within the range of the final limitation. 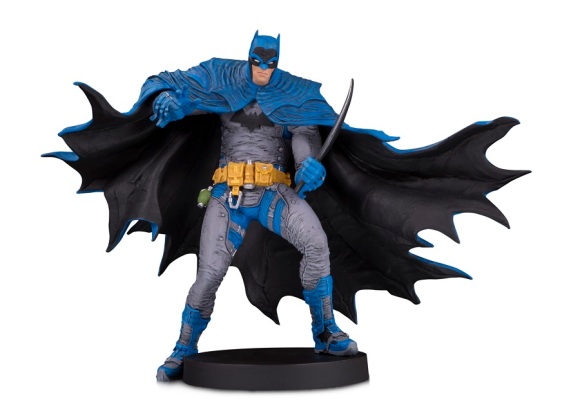 One of DC’s most internationally renowned artists, Rafael Grampá has inspired many others through his stylized art and design…including the team at DC Direct, who have produced several statues based on his art. 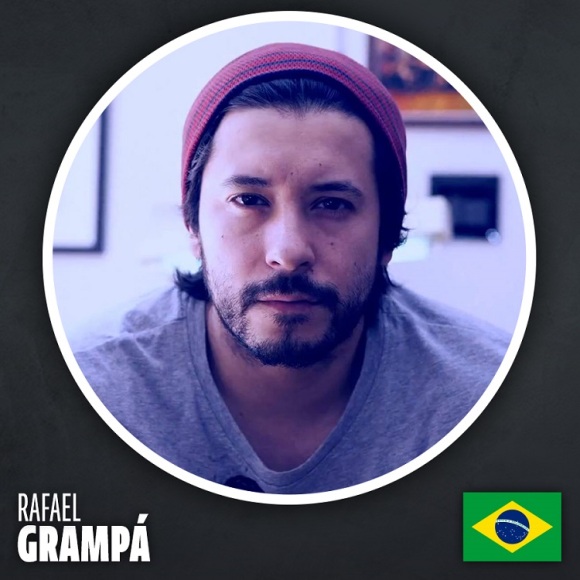 This year, DC Direct is going bigger and bolder than ever before when it comes to Grampá’s work, releasing one of their largest DC Designer series statues based on his art.

Inspired by his original design for a Batman: Black & White statue, the DC Designer Series: Batman by Rafael Grampá Statue is a 1:6-scale Designer Series piece that features Grampá’s sword-wielding design in full color for the first time. The larger size and vivid color palette unlock greater detail in Grampá’s statue, making for a phenomenal collectible that’s a must-have for any Batman fan.

Read more HERE about Grampá’s thoughts on the statue. 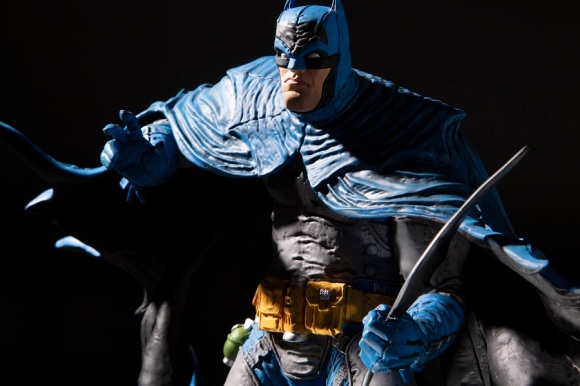 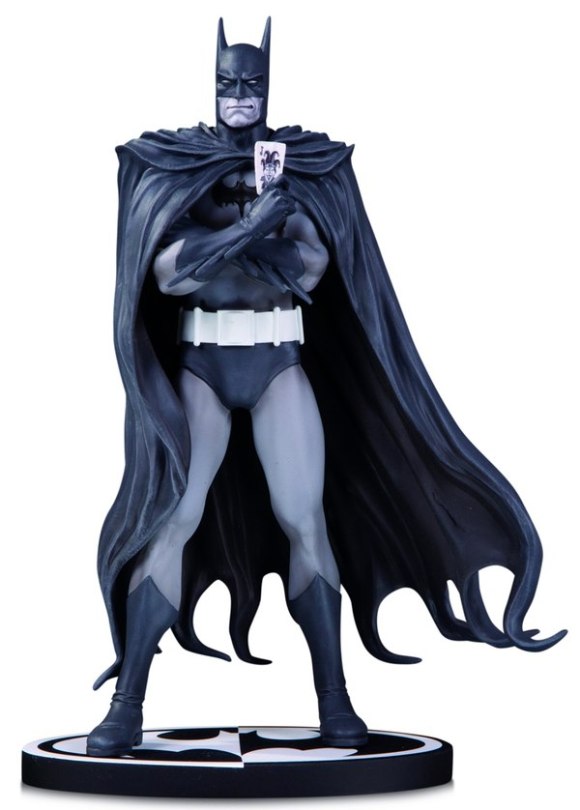 Based on one of DC Comics’ most popular stories, Batman: The Killing Joke, this Batman figure joins the Batman Black & White statue line at number 104. Previously seen in the popular Designer Series statue line, this black-and-white version is perfect for any collectors of the Batman Black & White series who want that perfect, iconic Bolland look. 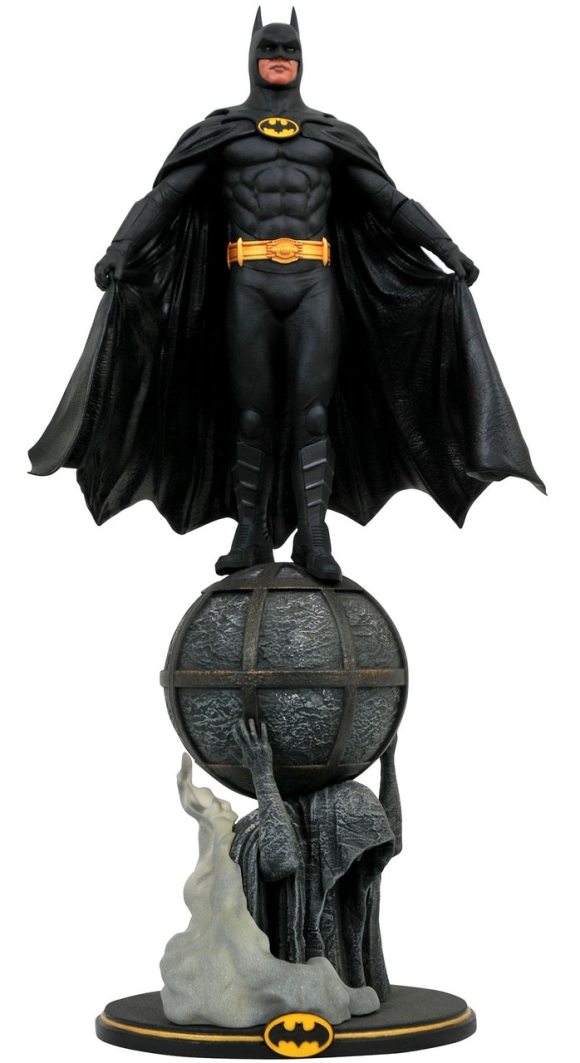 One of the most iconic Batmen of all time takes the stage with this all-new Gallery Diorama of Batman from Tim Burton’s 1989 movie Batman!

Standing atop a distinctive piece of Gotham City architecture, Batman spreads his cape and prepares to dive on some unsuspecting evildoer. Measuring approximately 11 inches tall, this diorama is made of high-quality PVC and features detailed sculpting and paint applications.

It comes packaged in a full-color window box. Designed by Shawn Knapp, sculpted by Rocco Tartamella.

Statues Celebrating A Century of Cinema Unveiled In Leicester Square

Statues of significant moments and characters from cinema have been unveiled in Leicester Square as a celebration of London’s film industry. Bronze depictions of Paddington Bear, Mr Bean, Mary Poppins, Laurel and Hardy and Bugs Bunny have all gone on display.

Each of the statues is a nod to a different decade in cinema, with almost all decades from the 1920s until now represented in the square.

Wonder Woman, Batman and Gene Kelly in Singin’ In The Rain are among the other statues.

Leicester Square was first home to a cinema in 1930, with the first premiere taking place there in 1937. The square has subsequently cemented its place in British cinema history and regularly plays host to some of the most high-profile events in the country’s film calendar.