“Will You Wear A Mask? I Ask” Performed By Mark Hamill

The legendary Mark Hamill used his incredible voice acting skills to perform the lines of the characters in the illustrated book “Will You Wear a Mask” by Tom Ruegger.

This children’s book was created to support President Joe Biden’s public mask mandate, to increase health and safety across America. The poem, told in the beloved style of Dr. Seuss, features Hamill playing the role of both a shopkeeper asking a patron to wear a mask and the stubborn patron who refuses to do so.

All proceeds from the video go to World Central Kitchen. A Kindle edition of the book can be purchased HERE. 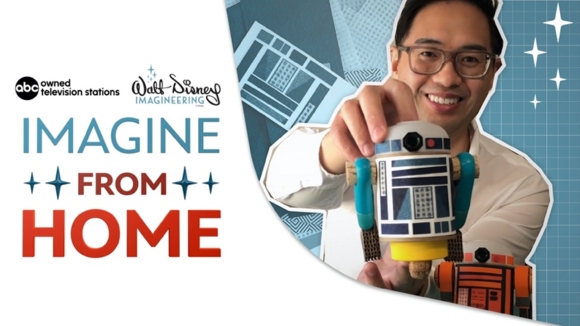 Walt Disney Imagineering and ABC have proudly collaborated on “Imagine from Home,” a new interactive video series on the streaming apps for the ABC Owned Television Stations. In each episode, Disney Imagineers share their skills and passion by showing you step-by-step instructions to draw or craft something inspired by beloved Disney Parks attractions using materials you can likely find around your home.

From building a droid out of a soap bottle to creating an “it’s a small world” cardboard toy, get creative with Disney Imagineers and “Imagine from Home”! All five episodes, ranging in various levels of complexity, are now available on ABC Owned Television Stations’ 32 connected TV apps across Android TV, Amazon Fire TV, Apple TV, Roku and on imaginefromhome.com:

Viewers learn to draw iconic Disney Castles with one of Imagineering’s principal interior designers. A co-creator of Disney Paper Parks, which allows guests to bring the magic of Disney Parks to their homes by constructing Disney attractions, lands and other locations out of paper, Amy enjoyed hosting this drawing tutorial because she is able to be with the audience during the whole drawing process.

Matthew demonstrates how to transform common household items, like soap dispensers and corks, into an R2 droid. He is happy to show you the process because it symbolizes what Imagineers do – use imagination and creativity to develop a design!

From the overall scene to the tiniest of details, learn step-by-step how to create Big Thunder Mountain Railroad with concept designer, Reid, who often creates models out of paper and clay.

Learn to use simple household items to create a castle night light with Elisabeth, who has worked as a producer and production designer at Walt Disney Imagineering. In her previous role as liaison between creative and concept development teams and design and production disciplines, she has organized and overseen the design and fabrication of many show elements including scenery, props, graphics, special effects, Audio-Animatronics figures, media, and more.

Follow along step-by-step to learn how to turn cardboard into an animated scene, inspired by the beloved “it’s a small world” attraction. Xiao Qing describes her Imagineering designs as collaboration tools to move projects forward; most recently she has been working on the Fantasy Springs expansion at Tokyo DisneySea and EPCOT’s Journey of Water.

We’re not worthy!  To kick off Season 2 of Reunited Apart, Josh Gad gathers the very excellent cast of Wayne’s World along with some very special guests to rock out together once again.

Authors James Lee Burke and Stephen King did a live talk on YouTube today and you can watch it below.

This discussion was hosted by Murder By The Books.

James Lee Burke is a New York Times bestselling author, two-time winner of the Edgar Award, and the recipient of the Guggenheim Fellowship for Creative Arts in Fiction. He’s authored thirty-eight novels and two short story collections. He lives in Missoula, Montana.

Stephen King is the author of more than sixty books, all of them worldwide bestsellers. His recent work includes If It Bleeds, The Institute, Elevation, The Outsider, Sleeping Beauties (cowritten with his son Owen King), and the Bill Hodges trilogy: End of Watch, Finders Keepers, and Mr. Mercedes (an Edgar Award winner for Best Novel and an AT&T Audience Network original television series). His novel 11/22/63 was named a top ten book of 2011 by The New York Times Book Review and won the Los Angeles Times Book Prize for Mystery/Thriller. His epic works The Dark Tower, It, Pet Sematary, and Doctor Sleep are the basis for major motion pictures, with It now the highest grossing horror film of all time. He is the recipient of the 2018 PEN America Literary Service Award, the 2014 National Medal of Arts, and the 2003 National Book Foundation Medal for Distinguished Contribution to American Letters. He lives in Bangor, Maine, with his wife, novelist Tabitha King.

Check Out The Trailer For Marvel’s Storyboards

For more than 20 years, Quesada has overseen stories at the House of Ideas in the worlds of publishing, film, animation, and television, serving as both Marvel’s Chief Creative Officer and Marvel’s Editor-in-Chief. During his 10-year tenure as Editor-in-Chief (the longest term since Stan Lee held the position), Marvel underwent a creative boom and became home to the comic industry’s greatest talents, which continues to hold true today. As CCO, he brought that same vision to the whole of Marvel Entertainment, and he began to explore more stories in unexpected places.

In addition to Marvel’s Storyboards, Quesada serves as Executive Producer on “Marvel’s Agents of S.H.I.E.L.D.” for ABC, “Marvel’s Hero Project” and “Marvel 616” for Disney+, and Marvel’s animation projects including Marvel Rising. Stay tuned to Marvel’s YouTube channel and social channels for the first season of Marvel’s Storyboards each week this summer – and for season 2 later this year!

Marvel’s Storyboards Season 1 and 2 are produced by Marvel New Media and BFD Productions. The series is presented by State Farm. Tune in to starting Thursday, July 23!

Who Ya Gonna Zoom? Watch The Reunited Apart Ghostbusters Edition

It’s the Return of the Kings – Josh Gad gathers the Fellowship and then some, to go on a very important mission…. quest…. thing.

John Krasinski is moving his web series “Some Good News” to ViacomCBS.

Following a massive bidding war, the feel-good news/talk program is will premiere new episodes on CBS All Access, with additional short-form content to air on other outlets across the ViacomCBS portfolio. Comedy Central Productions will produce the series.

Krasinski will remain onboard as an executive producer and will hold a recurring on-camera role, but he is not expected to host the new installments.

“Could not be more excited and proud to be partnering with CBS/Viacom to be able to bring Some Good News to so many more people!” Krasinski said in a statement. “From the first episode, our goal was to create a news show dedicated entirely to good news. Never did I expect to be joining the ranks of such a historic news organization as CBS.”

“Comedy Central Productions is excited to partner with John and bring his beloved Some Good News to audiences around the world through ViacomCBS’ family of brands,” said Chris McCarthy, Entertainment & Youth Group president.

The “Office” alum debuted the show back in March on YouTube, where it became a reliable hit. The show produced a total eight episodes before Krasinski signed off earlier this month. The channel currently has 2.56 million subscribers and a total of more than 70 million video views.

Watch The Some Good News With John Krasinski Community Episode 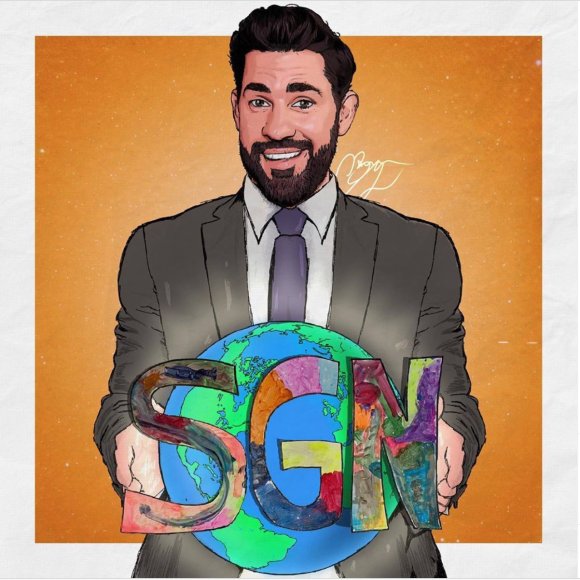 Some Good News has always been… about you!  SGN wants to thank each and every one of you for being a part of this story. For sending in your clips, weather reports, and art. For watching, laughing, crying, dancing, and celebrating with them. There is always good in the world!  Now it’s time for everyone to continue to spread good news in their own ways.

Some Good News will take a break for now, but there is more to come! Stay tuned.

The cast of Back to the Future reunited for a video posted Monday, a second in a series of fundraising projects spearheaded by Josh Gad, dubbed Reunited Apart.

The actor launched his new YouTube series by reuniting the cast of the Goonies in an effort to raise funds for Project HOPE.

In the newest chapter of the series, Gad first chatted (over video) with stars Christopher Lloyd and Michal J. Fox before bringing in other familiar faces, such as Lea Thompson, Mary Steenburgen and Elisabeth Shue. Gad was also able to wrangle screenwriter Bob Gale and writer-director Bob Zemeckis. Trilogy composer Alan Silvestri and rocker Huey Lewis also joined the chat. And self-described Back to the Future superfan (and Star Wars filmmaker) J.J. Abrams dropped in on the fun.

The group talked about their time on the franchise and which scenes they enjoyed working on the most. There were even a few lines readings of some of the most iconic exchanges.

Gale and Zemeckis recounted how they had to battle studio Universal on the title of the film and Lewis talked about how he had no clue what to write for a film about time travel, so he instead wrote the classic “Power of Love.”