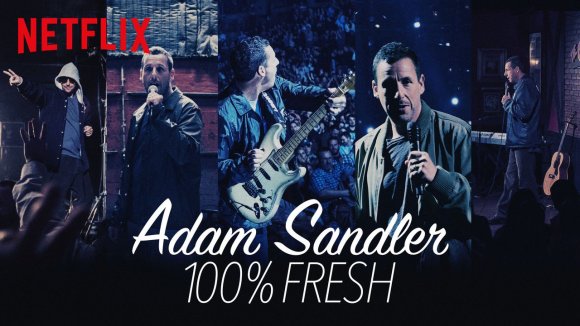 Directed by Steven Brill in his eighth collaboration with Sandler following Going Overboard, Little Nicky, Mr. Deeds, The Wedding Singer, Big Daddy, Sandy Wexler and The Do-Over, the comedy special sees the 52-year-old actor taking his jokes and music on the road to various venues including comedy clubs, concert halls and even an unsuspecting subway platform.

Sandler’s Happy Madison and Netflix have worked together on four previous projects including films The Ridiculous 6, Sandy Wexler, The Do-Over and The Week Of, the latter of which were the highest-reviewed of their collaborations. He also starred in the Noah Baumbach film The Meyerowitz Stories (New and Selected) for Netflix.

He most recently starred in the third entry in the hit family franchise Hotel Transylvania 3: Summer Vacation, and is currently working on the next Netflix collaboration Murder Mystery, which is a reunion of Sandler and Jennifer Aniston following their 2011 hit rom-com Just Go With It.

Adam Sandler: 100% Fresh will debut on Netflix on October 23.