Son of A Nutcracker, General Mills Is Releasing Elf Cereal For The Holidays The beloved movie Elf is now a cereal, thanks to General Mills, and only cotton-headed ninny muggins won’t be trying it.

According to Buddy the Elf, there are four main food groups: candy, candy canes, candy corn, and syrup. That last one inspired the new cereal, since we all know that Buddy loves maple syrup, especially on his spaghetti. The festive cereal is made of maple-flavored corn puffs and green and red holiday tree marshmallows.

The limited-edition Elf Cereal will be on shelves in time for the holidays. It’ll be available at grocery retailers nationwide in a mid-size ($2.50) and family-size ($3.99) boxes. 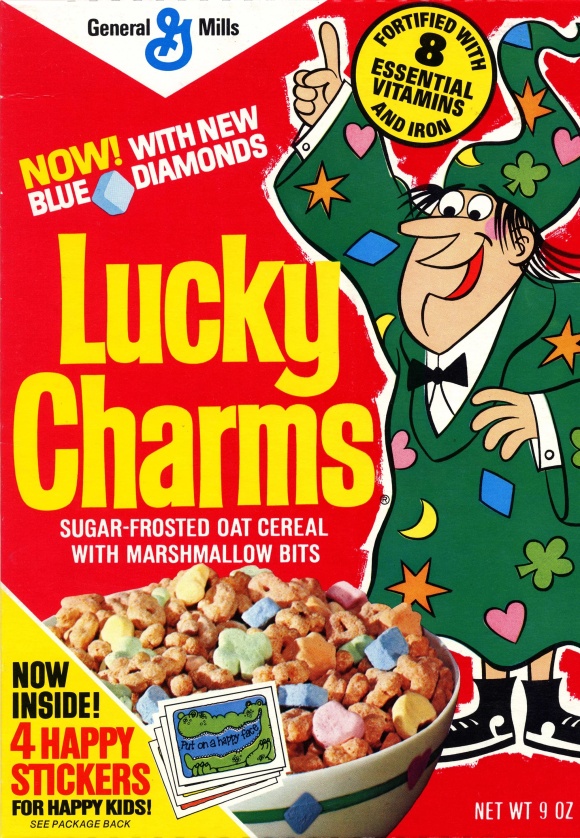 Frosted Flakes and Froot Loops are great apart, but even better together.

Kellogg’s is making all of our sugary-cereal dreams come true by releasing the first-ever cereal mashup between Frosted Flakes and Froot Loops — because why should you choose only one of the iconic cereals when you can have both?

The new breakfast creation features both of the cereals’ fan-favorite mascots Tony the Tiger and Toucan Sam on the box and an unexpected but satisfying flavor combo of the fruity loops and frosted corn flakes. The limited-edition cereal will be available nationwide starting in June while supplies last.

General Mills has unveiled its latest Disney+ Star Wars: The Mandalorian cereal, featuring Baby Yoda. The cereal due later this summer consists of sweetened corn puffs with marshmallows. All of the green marshmallows are in the shape of The Child’s head.

Saturday Morning By Funko At DesignerCon!

Funko is debuting Saturday Morning, an experiential booth that focuses on FunkO’s cereal, classic cartoons, and, most importantly, fun at DesignerCon! 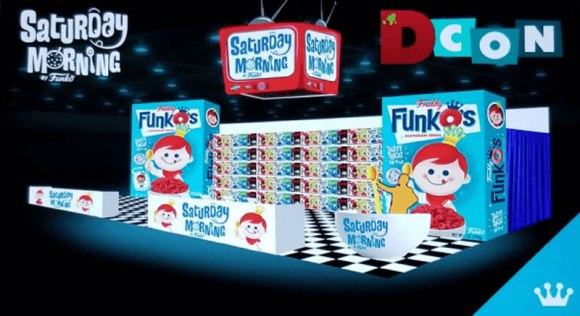 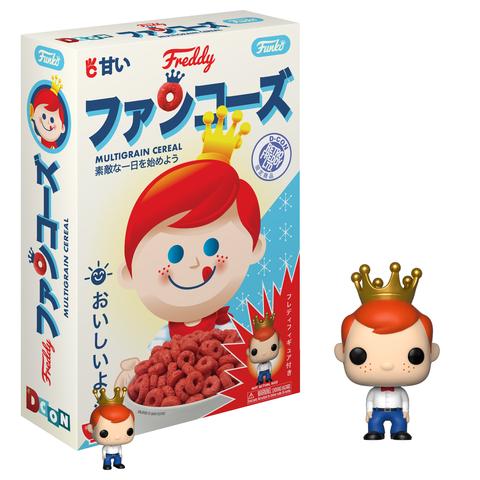 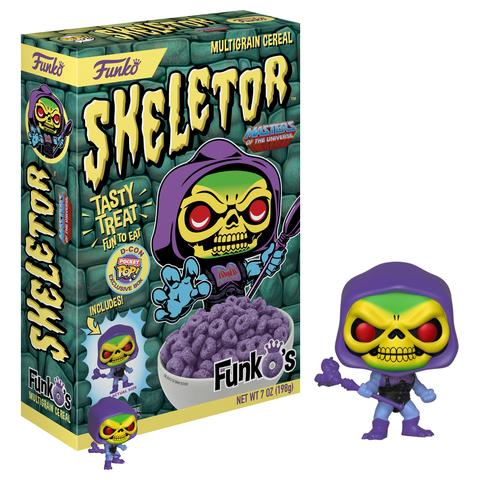 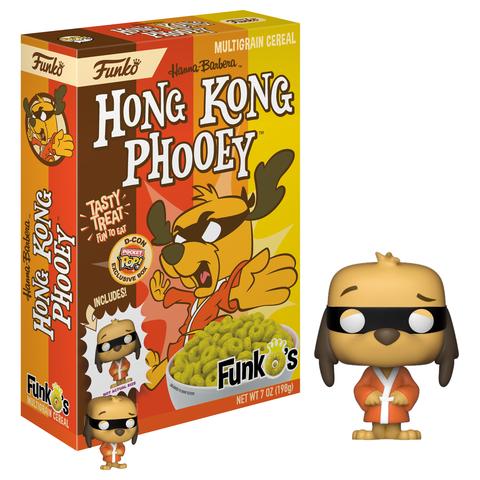 In the Saturday Morning spirit, the Funko booth will also have exclusive Pop! Tees in Cereal Box and Television Box packaging! The Cereal Box packaging will include Quisp, Count Chocula, Lucky Charms, and Cap’n Crunch!

The Television Box Pop! Tees include The Jetsons, The Flintstones, and Masters of the Universe! 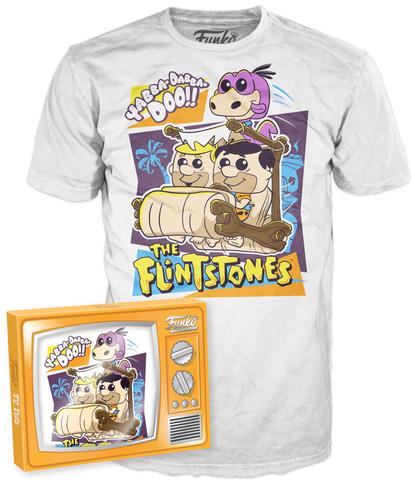 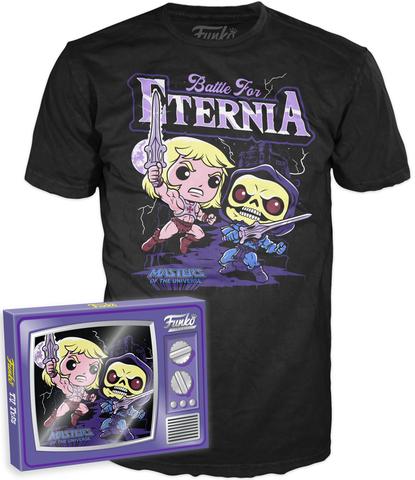 Introducing Funko Cereal Bowl and Spoons, which feature Freddy Funko, Hong Kong Phooey, Rugrats, Skeletor, and Marvin Martian! All five will debut at DesignerCon and will be widely available later this year! 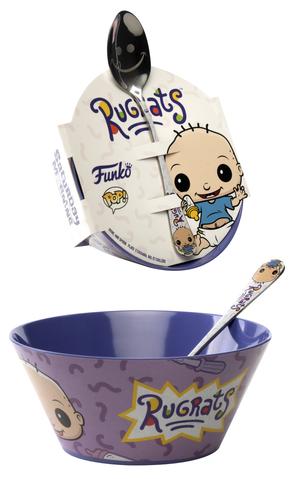 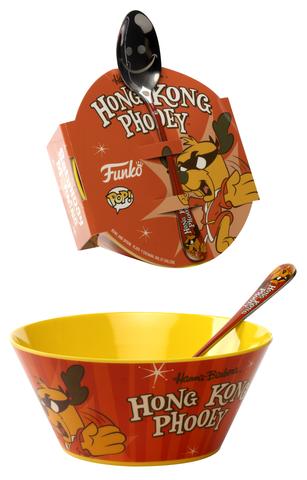 Make sure to visit Funko’s DesignerCon page for updates!

Funko Founder Michael Becker unveiled a new product line for Funko, which is cereal with mini-Pop figures included in the box. The line, which will be marketed through collectible store outlets as opposed to grocery stores, goes on sale in June 2018. As an added feature, the Elvira cereal, named after Elvira Mistress of the Dark, will turn black, and the Freddy Krueger cereal will turn red, when milk is added.

“One of the fun things is we are about to release our own line of cereal, with a mini-Pop inside,” Becker explained. “We got all the cool licenses like He-Man, Wonder Woman, Elvira Mistress of the Dark, Freddy Krueger and our own Freddy Funko. We start shipping to stores in June and we have the distribution set up and the product is pre-sold. It’s just one more of those feel-good Funko items.” He continued, “I used to watch cartoons on Saturday mornings while I was eating cereal. There are prizes in the cereal and it will sell for $7.99 a box. When you add milk to the Freddy Krueger cereal, it looks blood red. With the Beetlejuice cereal, when you add milk it looks like slime.”

You Could Win 1 of 10,000 Boxes of Lucky Charms Marshmallows!

In 2015, 10 lucky people won a box of “Marshmallow Only” Lucky Charms through a social media sweepstakes. But according to the brand’s many marshmallow maniacs, 10 boxes just wasn’t enough.

So this year Lucky Charms has decided to go big, unleashing 10,000 boxes of Lucky Charms marshmallows. Yes, you read that correctly.

This month, specially-marked boxes of Lucky Charms are hitting retail stores across the U.S. that include a code on the inside back panel. Just enter that 14-digit code at MarshmallowOnly.com to see if you’re one of the 10,000 lucky winners. 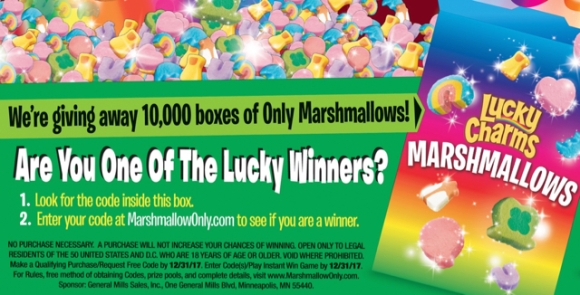 Lucky Charms’ specially-marked boxes for this promotion will be available on store shelves across the U.S. soon, with limited distribution, and will be more widely available in a few weeks. The sweepstakes will run through December 2017. Official rules can be found at MarshmallowOnly.com.

If you are lucky enough to have a winning code, you’ll receive a special Lucky Charms Marshmallows box in the mail a few weeks after entering it on the website. Once you receive your marshmallows box, share a photo or video on Lucky Charms’ Facebook, Twitter or Instagram pages.

The Justice League Is Coming To Breakfast

The Justice League has come to the front, back and inside of several of General Mills cereals.

“In brainstorming with Warner Bros. Consumer Products and DC, we were energized by the similarities and popularity of the Justice League characters and of our own cereal characters,” says Lisa Kessel, a marketing communications manager at General Mills. “DC shared that many of their artists were also huge cereal fans and we were excited to bring that love of cereal and the love of comics together in one holistic event.”

Six cereal boxes are getting a complete DC Super Hero makeover. The front of five boxes feature transformations of our General Mills’ characters, and one box features Wonder Woman. 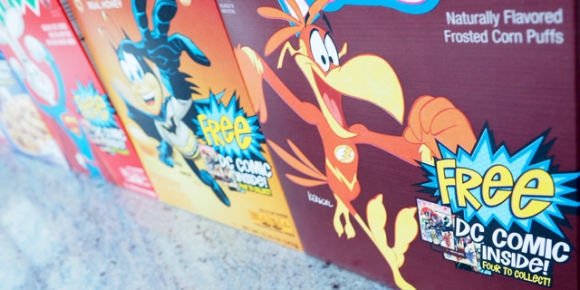 BuzzBee takes on the look of Batman, the Trix Rabbit of Superman, Lucky of Green Lantern, Sonny of The Flash, and the Crazy Squares team of Aquaman, Cyborg and Green Lantern.

And the action doesn’t stop there. The back of the boxes, when lined up, make a powerful panoramic, designed by well-known comic book artist Ivan Reis. After 26 years in the industry, Reis has created classic-modern artwork for more than 200 comic books. He told us he enjoyed the challenge of creating the back-of-the-box composite art. 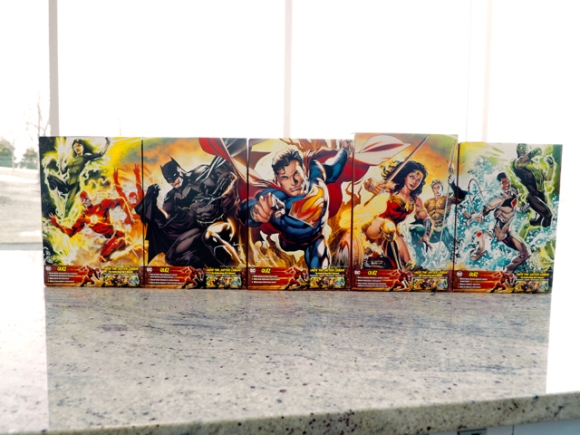 “The art is about three feet wide when put together. It’s huge, and it doesn’t even fit my drawing board,” he says. “While working on them, I would split it and assemble it back together all the time to see how the entire image looked.”

This week, General Mills very quietly teased via Twitter the news that Girl Scouts Cookie cereals will be available in stores as of January 2017, but didn’t give much more information than that.

From the picture alone, however, it looks like Thin Mints and Caramel Crunch (Samoas) made the cut.