This fall, welcome to the Resistance!

Production has begun on Star Wars Resistance, an exciting new animated adventure series about Kazuda Xiono, a young pilot recruited by the Resistance and tasked with a top-secret mission to spy on the growing threat of the First Order. It will premiere this fall on Disney Channel in the U.S. and thereafter, on Disney XD and around the world.

Featuring the high-flying adventure that audiences of all ages have come to expect from Star Wars, Star Wars Resistance — set in the time prior to Star Wars: The Force Awakens — will feature the beloved droid BB-8 alongside ace pilots, colorful new characters and appearances by fan favorites including Poe Dameron and Captain Phasma, voiced by actors Oscar Isaac and Gwendoline Christie, respectively.

“The idea for Star Wars Resistance came out of my interest in World War II aircraft and fighter pilots” said Filoni. “My grandfather was a pilot and my uncle flew and restored planes, so that’s been a big influence on me. There’s a long history of high-speed racing in Star Wars, and I think we’ve captured that sense of excitement in an anime-inspired style, which is something the entire team has been wanting to do for a long time.”

Marc Buhaj, senior vice president, Programming and general manager, Disney XD, said, “Our colleagues at Lucasfilm have created a compelling narrative for an untold moment in the Star Wars galaxy, and we are excited to partner with them again on this new original series. Star Wars Resistance will bring viewers across generations an engaging story with heart, humor and both new and familiar characters.”

Watch A Sneak Peek From Marvel’s Spider-Man, Coming This Summer To Disney XD

You can watch a first clip from the new animated Spider-Man! Look for Marvel’s Spider-Man to debut on Disney XD this summer. Produced by Marvel Television, the series tells the story of an unsure but courageous teen who has to figure out how to be a super hero from the very beginning. 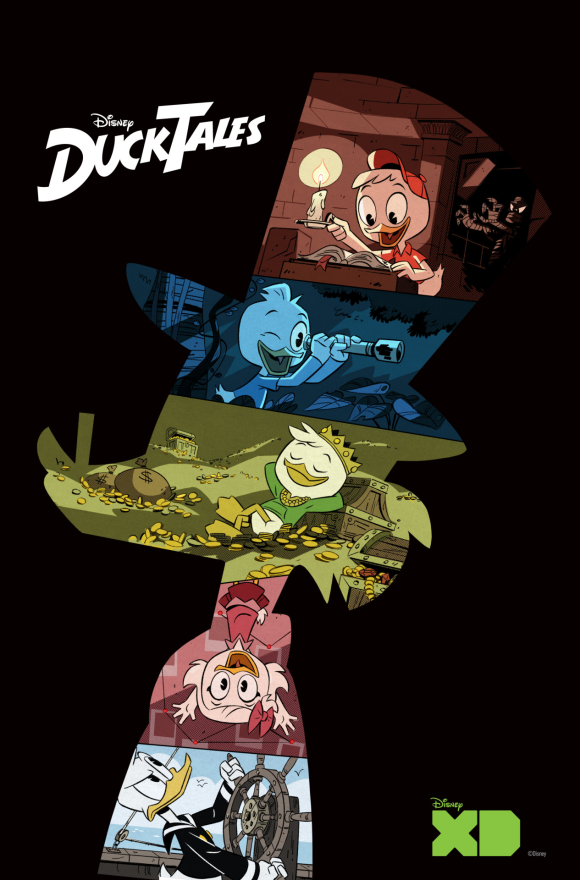 Check out this first look at the all-new family comedy-adventure series “DuckTales” premiering this summer on Disney XD.

The series stars David Tennant as Scrooge McDuck; Danny Pudi, Ben Schwartz and Bobby Moynihan as the voices of Huey, Dewey and Louie, respectively; Kate Micucci as Webby Vanderquack; Beck Bennett as Launchpad McQuack and Toks Olagundoye as Mrs. Beakley, and will follow the epic family of ducks on their high-flying adventures around the world. 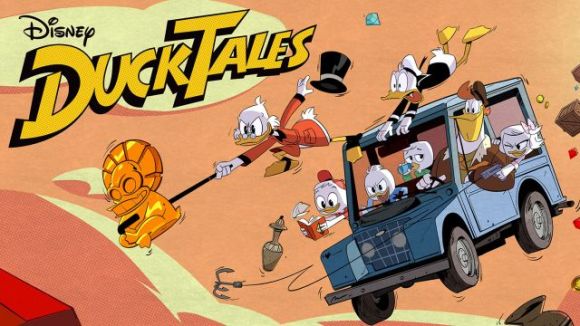 Disney Television Animation and DisneyXD have revealed the official teaser trailer for their upcoming DuckTales revival .

“DuckTales has a special place in Disney’s TV animation history,”Marc Buhaj, Senior Vice President, Programming, and General Manager, DisneyXD, previously said. “It drew its inspiration from Disney Legend Carl Barks’ comic books and through its storytelling and artistic showmanship, set an enduring standard for animated entertainment that connects with both kids and adults. Our new series will bring that same energy and adventurous spirit to a new generation.”

A generation’s seminal cartoon, DuckTales led the daily syndicated cartoon block “The Disney Afternoon” with 100 episodes produced from 1987–‘90. An animated theatrical film, DuckTales the Movie: Treasure of the Lost Lamp, premiered in 1990. 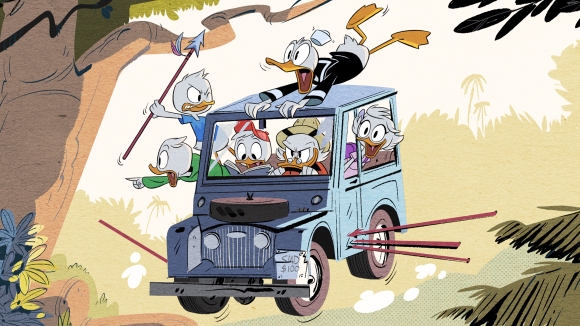 Last year, Disney announced an all-new version of the Emmy Award-winning animated series DuckTales had been ordered for launch on DisneyXD channels around the world in 2017. Now Disney Television Animation has revealed the first image from new DuckTales series.

Marc Buhaj, Senior Vice President, Programming, and General Manager, DisneyXD, said, “DuckTales has a special place in Disney’s TV animation history, it drew its inspiration from Disney Legend Carl Barks’ comic books and through its storytelling and artistic showmanship, set an enduring standard for animated entertainment that connects with both kids and adults. Our new series will bring that same energy and adventurous spirit to a new generation.”

A generation’s seminal cartoon, “DuckTales” led the daily syndicated cartoon block “The Disney Afternoon” with 100 episodes produced from 1987–‘90. An animated theatrical film, DuckTales the Movie: Treasure of the Lost Lamp, premiered in 1990.

The Walt Disney Company has announced today that in lieu of a theatrical sequel, a Big Hero 6 series will be making its way to DisneyXD in 2017.

In production now, the Big Hero 6 series will pick up where the film left off as Hiro is enrolled at San Fransokyo Institute of Technology where he will go up against daunting academic challenges and the social trials of being the little man on campus. Off campus, the stakes are raised for the high-tech heroes as they must protect their city from an array of scientifically enhanced villains.

Hiro isn’t the only one returning, as Wasabi, Honey Lemon, Fred, Go Go, and Baymax will all be making their way to the animated series as well.

“Our colleagues at Walt Disney Animation Studios have created a brilliant new world, inspired by Marvel, with vivid, unique characters,” Disney Channels Worldwide president Gary Marsh said. “We are thrilled to have the opportunity to further develop these characters into a world class animated series — full of fun, action and the kind of endearing storytelling that only Mark, Bob — and Baymax — can deliver.”

Big Hero 6 The Series will be executive produced by Mark McCorkle & Bob Schooley (Kim Possible) and Nick Filippi. Winner of the Academy Award for Best Animated Feature Film of the Year, Big Hero 6 brought in over $650 million at the global box office.

Disney has announced that a new animated series based on their popular animated film Tangled will debut on the Disney Channel in 2017!

Most of the major voice and musical talent from the 2010 hit will return, including Mandy Moore and Zachary Levi reprising their roles of Rapunzel and Flynn Rider (nee Eugene), as well as new songs from Academy Award-winning composer Alan Menken and lyricist Glenn Slater. Clare Keane, daughter of Disney Legend Glen Keane (who served as an animation supervisor on Tangled), consulted on the series.

Also making the leap to the small screen are fan-favorite characters like Rapunzel’s chameleon sidekick Pascal, the uppity horse Maximus, the thugs from the Snuggly Duckling Pub and a brand new character: Cassandra, described as “a tough-as-nails handmaiden, who becomes Rapunzel’s confidant.”

The series is set to take place in between events of the feature film and the 2012 short film Tangled Ever After. Apparently there were a lot of adventures that Rapunzel and Eugene got into in the time in-between.

During the Star Wars Rebels panel at Star Wars Celebration on Saturday, an extended trailer was shown for Season 2 of the DisneyXD animated series.

Continuing the epic tradition of the legendary “Star Wars” saga, “Star Wars Rebels” unfolds between the events of Star Wars: Episodes III and IV and tells the story of the motley but clever crew of the starship Ghost who together face threatening new villains, encounter colorful adversaries and embark on thrilling adventures. In its second season, “Star Wars Rebels” will feature recurring appearances by fan-favorite characters including Darth Vader and Ahsoka Tano.

“Since we introduced our first LEGO Star Wars set in 1999, we have seen and heard from countless Star Wars fans who have used LEGO bricks to tell their own version of this timeless story, re-enacting favorite scenes and imagining new story lines,” said Jill Wilfert, vice president of licensing and entertainment for The LEGO Group. “LEGO Star Wars: Droid Tales gives us an opportunity to share highlights of the Star Wars story with a sense of humor and excitement that can only be conveyed through the LEGO brick, and will be a fun resource for families as they gear up for the next movie.”

As its title suggests, “Droid Tales” is a re-telling of the Star Wars universe through the eyes of C-3P0 and R2-D2. Following their victory celebration in the Ewok village on Endor, seen at the close of Star Wars: Episode VI Return of the Jedi, C-3PO and R2-D2 have gathered to regale Luke, Leia, Han, Chewbacca and the other Rebels with the tales of their adventures that led to the events of Star Wars: Episode I The Phantom Menace. An accidental kidnapping occurs while the droids are reminiscing and suddenly viewers are taken on a new adventure that leads to encounters with familiar faces and places that prompt the re-telling of the entire saga. The series offers all of the playful humor that viewers expect from LEGO Star Wars.

The series is set to arrive later this year, just before Star Wars: The Force Awakens arrives on December 18, 2015.

A New DuckTales Is Coming To Disney XD In 2017

Whether you grew up on the Disney Afternoon, or you’re just a fan of iconic Disney animation, we think you’ll be excited to learn that an all-new DuckTales, an animated comedy series based on the Emmy Award-winning series treasured by a generation of viewers, has been ordered for launch in 2017 on DisneyXD channels around the world. Set to be produced by Disney Television Animation (DTVA), the new series will again star Disney’s enduringly popular characters: Scrooge McDuck, his grandnephews Huey, Dewey, and Louie, and Donald Duck. The announcement was made today by Marc Buhaj, Senior Vice President, Programming, and General Manager, DisneyXD.

Buhaj said, “DuckTales has a special place in Disney’s TV animation history, it drew its inspiration from Disney Legend Carl Barks’ comic books and through its storytelling and artistic showmanship, set an enduring standard for animated entertainment that connects with both kids and adults. Our new series will bring that same energy and adventurous spirit to a new generation.”

A generation’s seminal cartoon, the Emmy Award-winning DuckTales led the daily syndicated cartoon block “The Disney Afternoon” with 100 episodes produced by DTVA from 1987–‘90. An animated theatrical film, DuckTales the Movie: Treasure of the Lost Lamp, premiered in 1990.

The original DuckTales is currently available on WATCH Disney Channel, an app that allows consumers to watch on tablet, phones, computer, and set top boxes.