Batman, Superman and Wonder Woman are going to loom large at Comic-Con this year and in toy boxes.

The superheroes of the upcoming movie Batman v Superman: Dawn of Justice (in theaters March 25, 2016) are bound to be a central component of the Warner Bros. movie panel at the San Diego Convention Center’s cavernous Hall H on July 11. Their action figures will also be on display and available for fans to take home as Comic-Con exclusives during the convention that begins next Wednesday.

Mattel is selling a movie-inspired BvS two-pack ($30) with the likeness of Henry Cavill’s Superman and Ben Affleck’s Batman. Each of the 6-inch-tall figures comes with fabric capes, display bases that combine to form the film’s iconic logo, and lights-and-sounds packaging teasing one of the big moments from the upcoming movie. 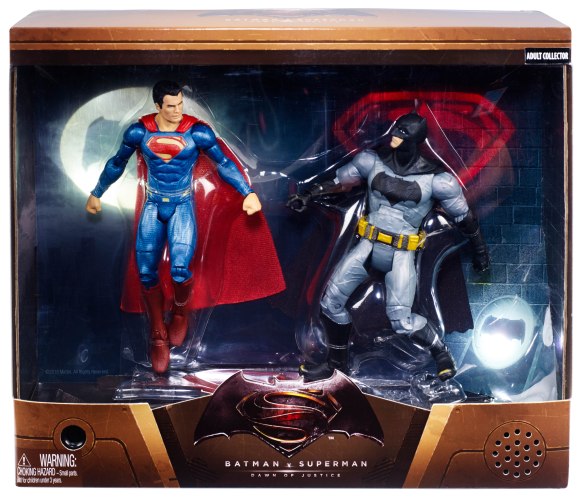 Fans of the Batfleck’s new Batmobile can also pick up a Hot Wheels edition ($25) of the superhero ride, featuring a die-cast chassis and body, rubber tires and neato machine guns and missile launchers — all encased in limited-edition packaging. 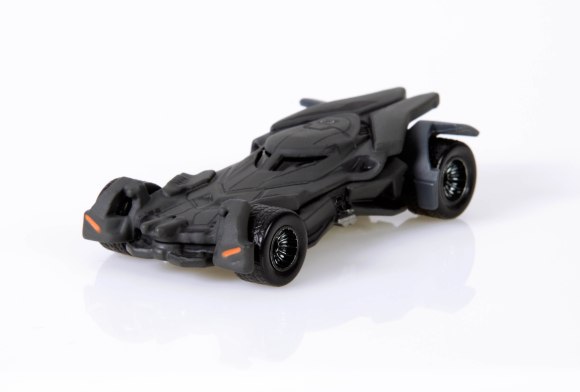 Mattel has a new Barbie line coming in the spring, and at their booth the company is showcasing a doll based on actress Gal Gadot’s Wonder Woman from Dawn of Justice. Standing 12 inches tall and featuring a sword, shield, tiara, bulletproof bracelets and her signature lasso of truth, Wonder Woman is part of the Barbie movie collection along with Superman and Batman.

And the Mattel booth is slated to display a life-sized Hot Wheels build of a Batman v Superman Twin Mill car designed to celebrate the film. Graphics on the car are inspired from the film suits of both heroes, and a die-cast toy version of the vehicle will be on sale in the spring as part of a movie-inspired Hot Wheels line. 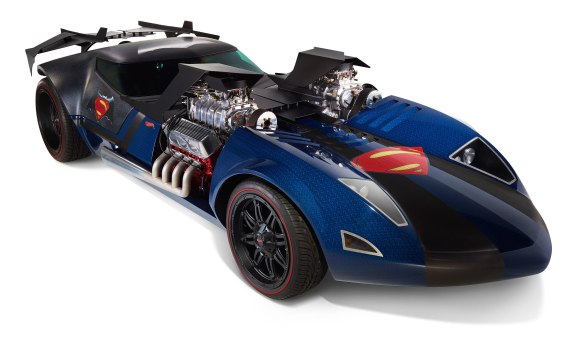 Funko is thrilled to announce our Bryan Fuller Pop! figure! The man behind Hannibal bears an eerie resemblance to Hannibal Lector! This Pop! comes in a run of 144 pieces and will be available during his signing at the Funko booth on Friday, July 10th at 2 p.m.! The line for the Bryan Fuller signing will not begin to form before 1 p.m. and Funko will only sell Bryan Fuller Pop!s during the signing.

Funko encourages fans to bring other Hannibal Pop!s to be signed, too!

Without further ado, here is the next installment of Funko’s San Diego Comic-Con exclusives list! 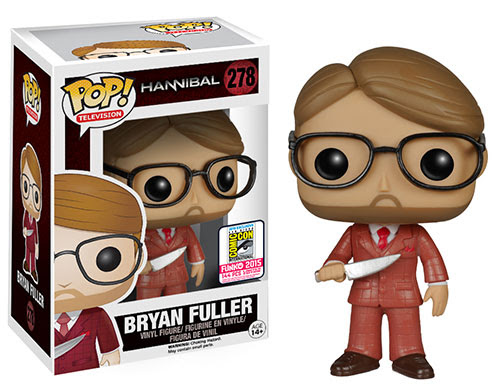 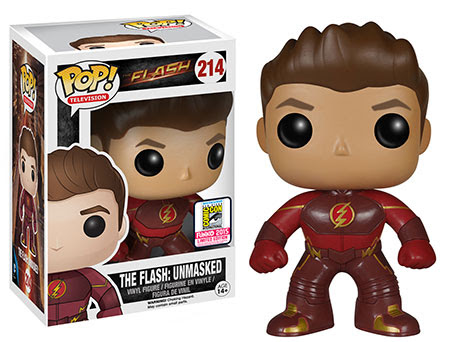 Best known for its popular limited-edition posters, MONDO the boutique arm of the Alamo Drafthouse theater chain has exclusive artwork available for attendees at San Diego Comic Con (July 8-12). Yet its booth in the San Diego Convention Center will also have new action figures, vinyl records and other merch for the geek crowd. 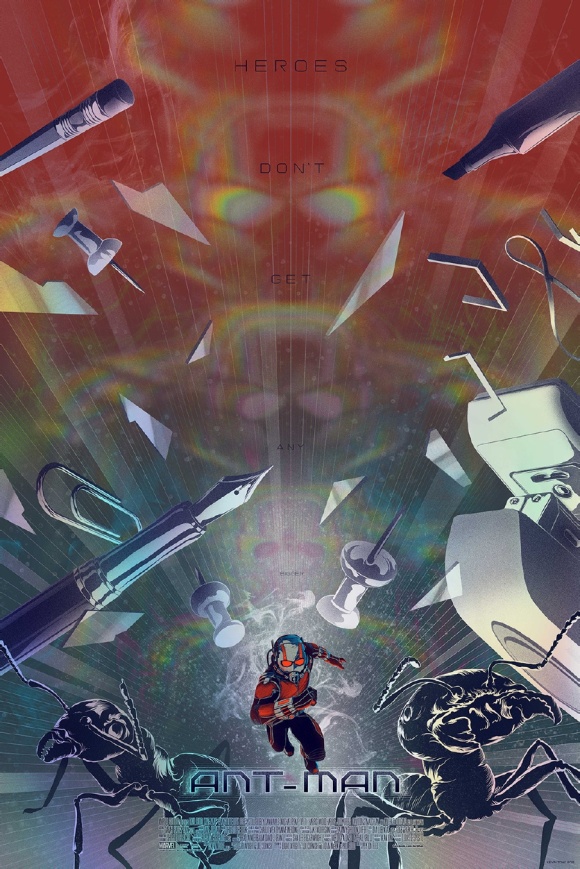 Ant-Man poster ($85). Mondo has a variety of pieces for sale as well as some licensing announcements in store, but one of the items of note to superhero fans will be a holofoil screen print (limited to 175) inspired by the new Ant-Man film (in theaters July 17). Artist Kevin Tong said he wanted the design “to show Ant-Man’s scale, the intensity of his transformation, and really just trying to make a poster as fun and dynamic as the movie.”

After Mondo dipped its toes in the toy business beginning last Comic-Con, this summer brings the first in a new series of toys based on the original TMNT comics of the 1980s. First up is Leonardo, who stands 11 inches tall and comes with a bunch of accessories including weapons, a blue mask to match the cartoons and a red mask from the comics. Also on display will be the upcoming figures of Donatello, Michelangelo and Raphael.

First Hellboy statue ($200). Before he became a comic-book hero and a movie star played by Ron Perlman, Hellboy was a black and white sketch done in 1991 by creator and artist Mike Mignola. Mondo’s created a polystone statue of this first pass at the horned hero — with the name “Hellboy” emblazoned on his belt — plus a variant color version done by original Hellboy colorist Dave Stewart. You can see him in San Diego but can’t take him home yet — interested parties can preorder Hellboy now at Mondo’s website. (Monster fiends will also want to stop by the booth to check out an upcoming Godzilla sculpture as well.) 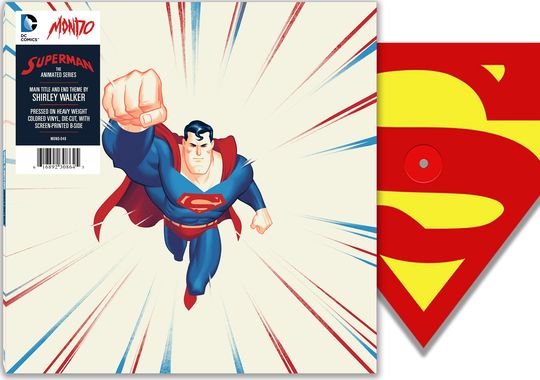 Superman vinyl ($25). Those with record players and a place in their heart for Shirley Walker’s theme composed for Superman: The Animated Series will want to pick up a die-cut single. Artwork for the cover is by Justin Erickson of Phantom City Creative, and the record is cut in the shape of Superman’s iconic “S” shield — folks can choose between red vinyl or Kryptonite green.

Aliens soundtrack ($35). This one’s special for fans of the late Oscar-winning composer James Horner, who died last week in a plane crash: A vinyl soundtrack of his score for James Cameron’s 1986 sci-fi flick Aliens. The deluxe edition features more than a dozen musical cues new to vinyl plus five bonus tracks, and a cover design by artist Killian Eng. “I wanted the alien to play a big role,” he said, “but at the same time incorporate its shape into the materials of the space station, almost like it becomes the station itself, keeping the marines in a steady merciless grip.”

Funko is proud to announce their seventh batch of San Diego Comic-Con exclusives! 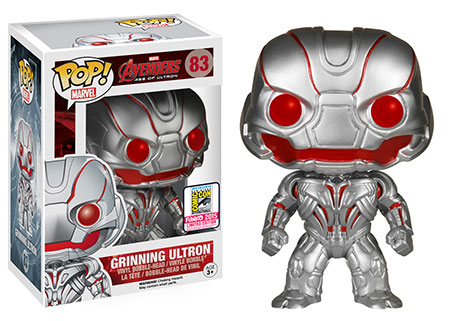 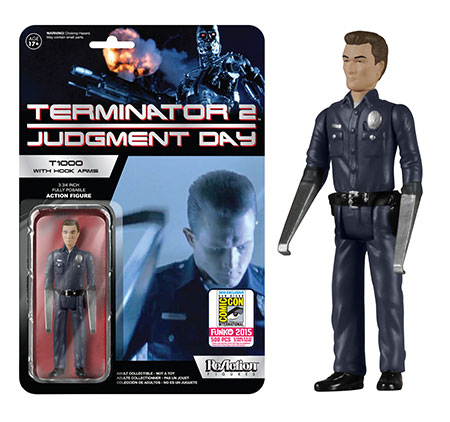 Funko is proud to announce their sixth batch of San Diego Comic-Con exclusives! 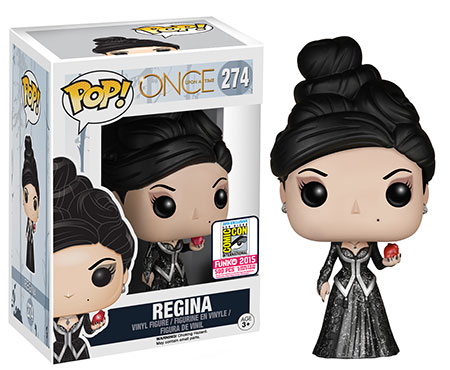 Pop! TV: Once Upon A Time – Regina 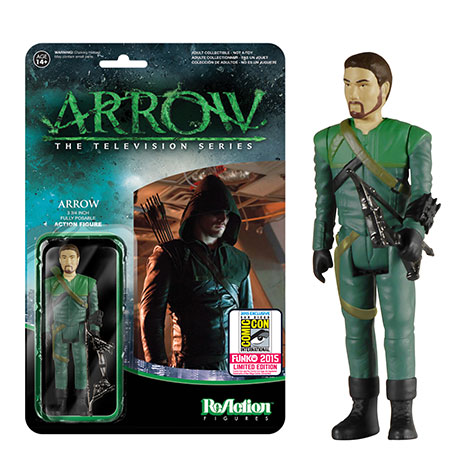 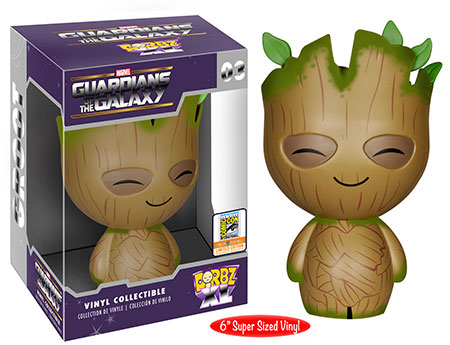 Funko is proud to announce their fifth batch of San Diego Comic-Con exclusives: 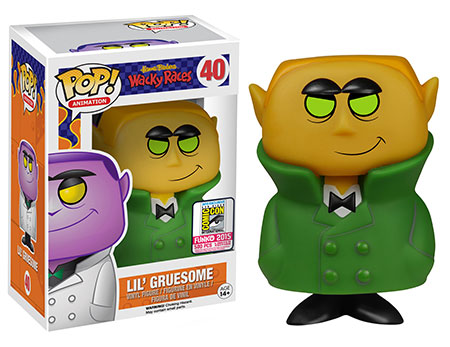 Funko is proud to announce their third batch of San Diego Comic-Con exclusives!

Pop! Disney/Pixar: Inside Out – Flamehead Anger 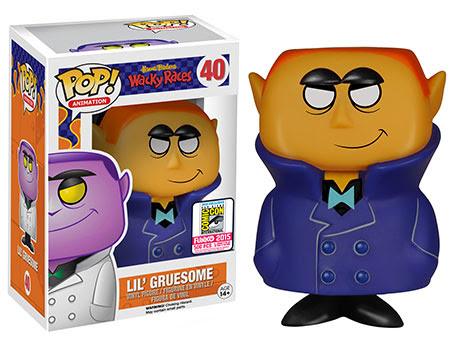 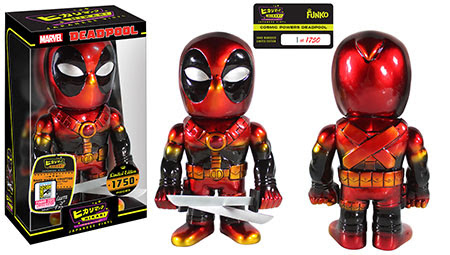 Funko is proud to announce our second batch of San Diego Comic-Con exclusives! Their goal was to cover as many beloved licenses and characters as possible to remind every Comic-Con attendee why they fell in love with these stories in the first place. 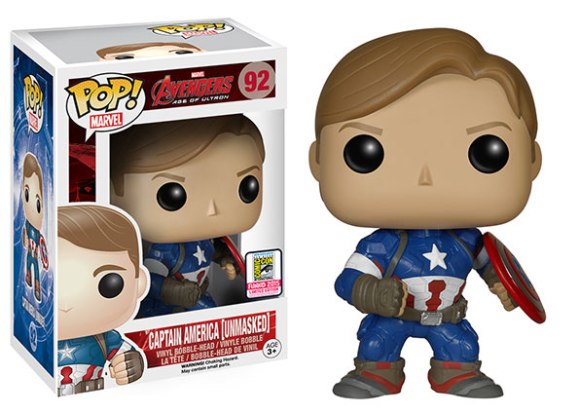 Funko is proud to announce their first batch of San Diego Comic-Con exclusives! Funko’s goal was to cover as many beloved licenses and characters as possible to remind every Comic-Con attendee why they fell in love with these stories in the first place.

In an effort to provide more of their products to Con-goers, FUNKO is not offering a pre-buy option this year. Without further ado, here is the first installment of Funko’s San Diego Comic-Con exclusives list! This is just the first batch with more releases coming in July! 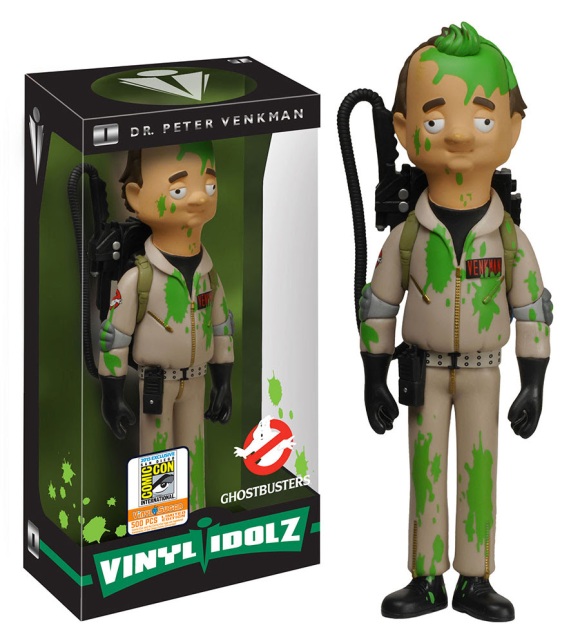 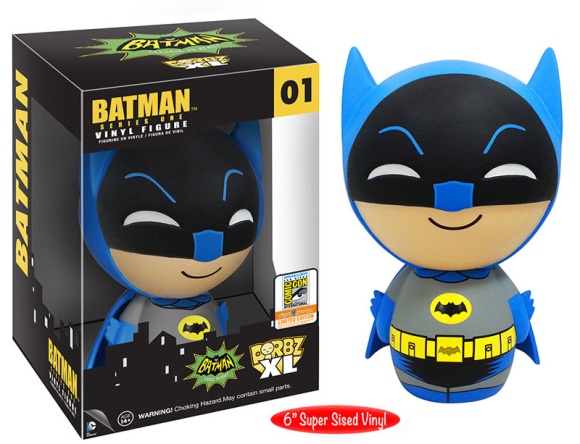 DC Collectibles, the high-end toy and collectible line from DC Entertainment revealed two exciting new con exclusive products that will only be available for purchase at New York Comic-Con 2013. 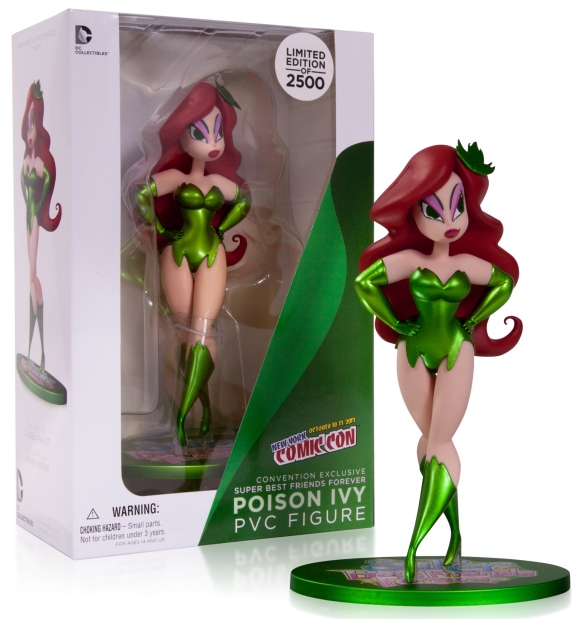 The second con exclusive is a DC Comics Super Heroes: Hal Jordan & Saint Walker Action Figure 2-pack sculpted by Robert Lynders. This set is the latest in the 3.75” scale and is priced at $29.95. The 3.75” action figures continue to be a must-have con exclusive from DC Collectibles. 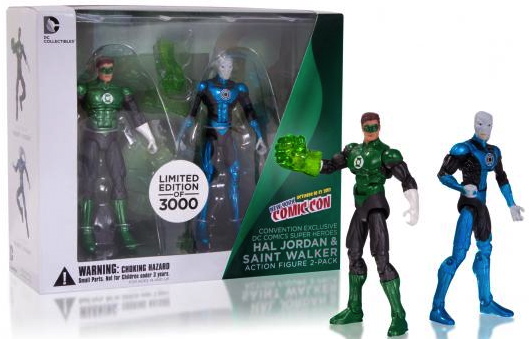 Make sure to stop by Graphitti Designs booth #755 at New York Comic-Con to purchase your DC Collectibles’ con exclusives!