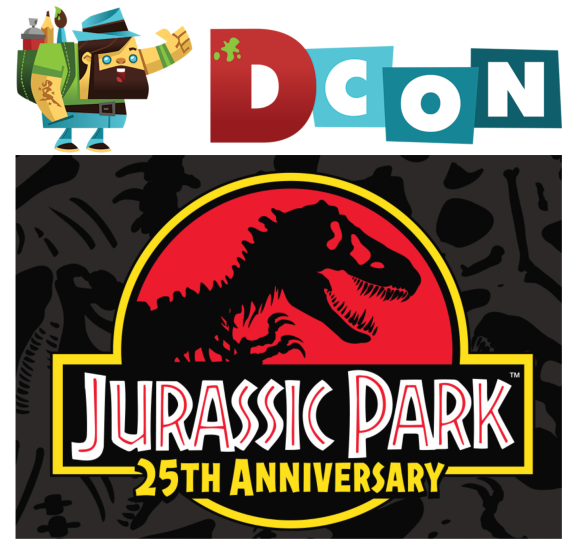 Jurassic Park is invading this week’s  , the Anaheim, California convention focusing on art and design geared toward collectors and creators. The convention will feature a Jurassic Park art show timed to this year’s 25th anniversary of Steven Spielberg’s film. 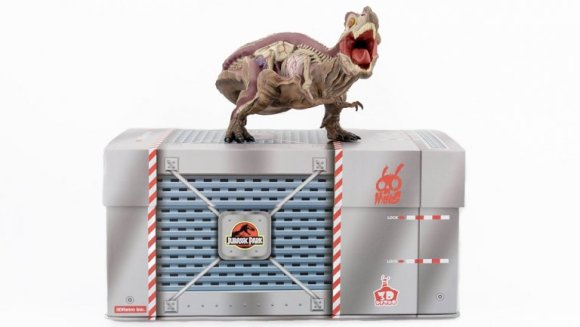 “Most surprising was how much beauty could be found in some of the movie’s most terrifying scenes. We also realized there are no small moments in Jurassic Park,” DesignCon curator Carmen Acosta tells The Hollywood Reporter of the show. “Our artists know this movie line for line, and many of their depictions come from small scenes that only fans who’ve watched the movie dozens of times would recognize. Our show covers the big moments everyone knows, but it will truly be an experience that speaks to those die-hard Jurassic Park fans out there.”

DesignerCon runs November 16-18 at the Anaheim Convention Center. Check out some of the pieces below. 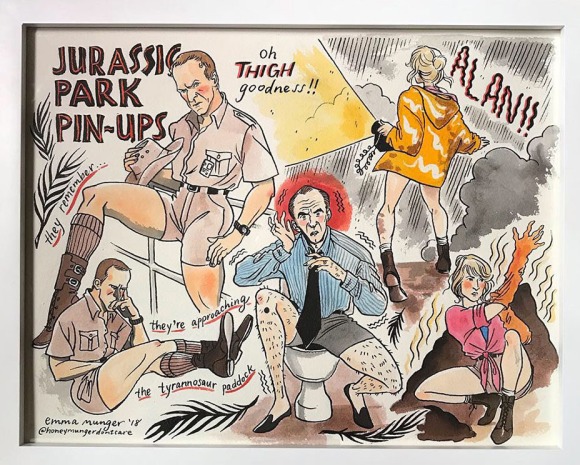 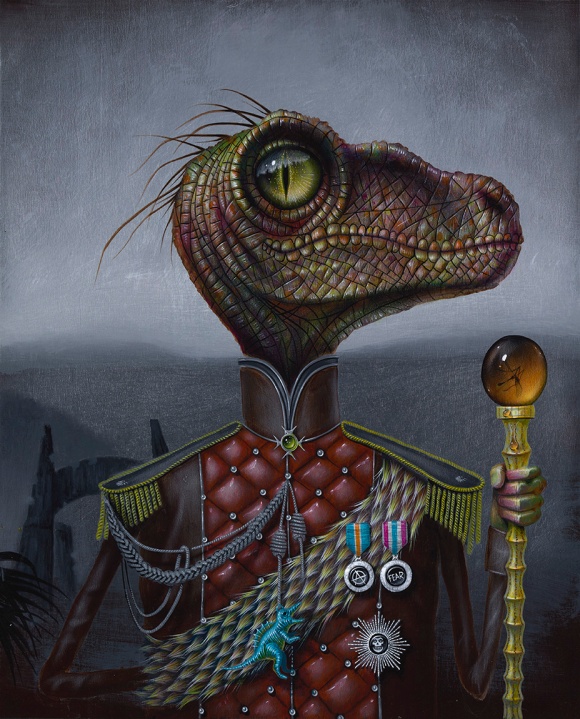 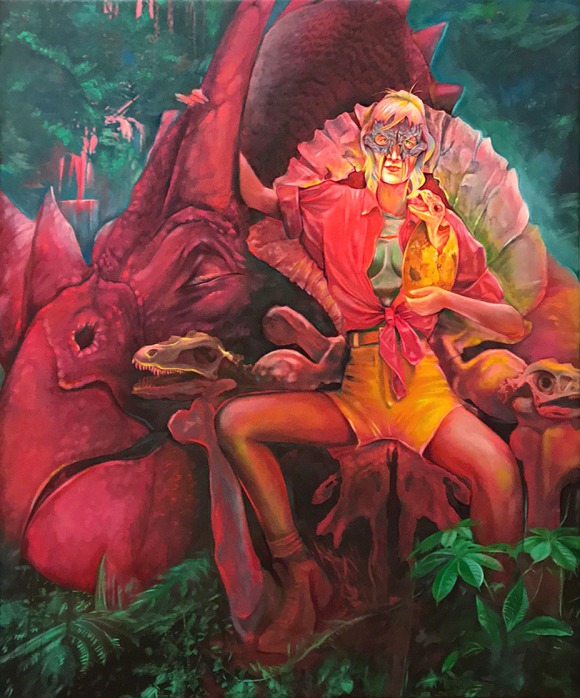 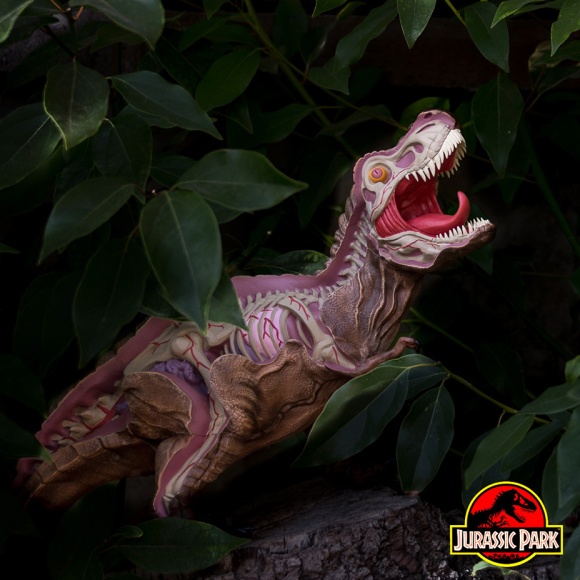 Jurassic World comes out on Blu-ray tomorrow and to celebrate the franchise, MONDO will release a t-shirt and pins inspired by the first film. With designs & logos pulled from the Jurassic Park style guide. Please follow MONDO on Twitter for the on sale announcement. These items will be available online at a random time on Tuesday October 20, 2015. 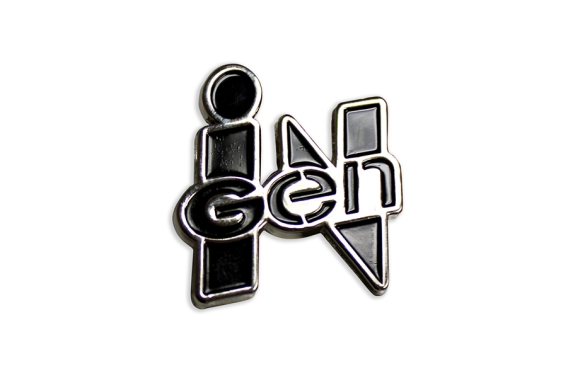 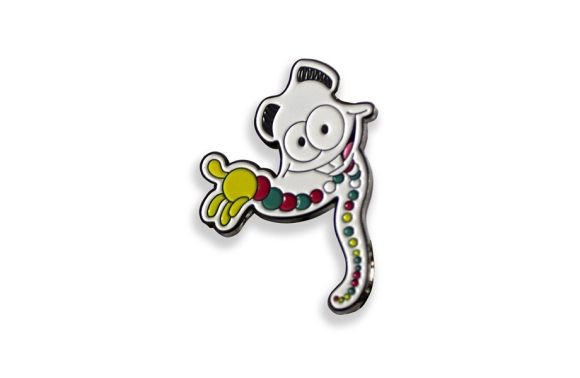 Please follow MONDO on Twitter for the on sale announcement. These posters will be available online at a random time on Tuesday, June 23rd. 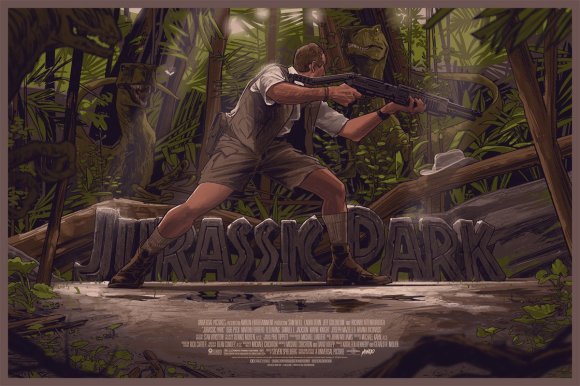 MONDO hosted the opening reception for When Dinosaurs Ruled the Earth last Friday, and tomorrow they’re unleashing the first round of posters from the show!

Please follow MONDO on Twitter for the on sale announcement. These posters will be available online at a random time on Thursday, June 18, 2015. 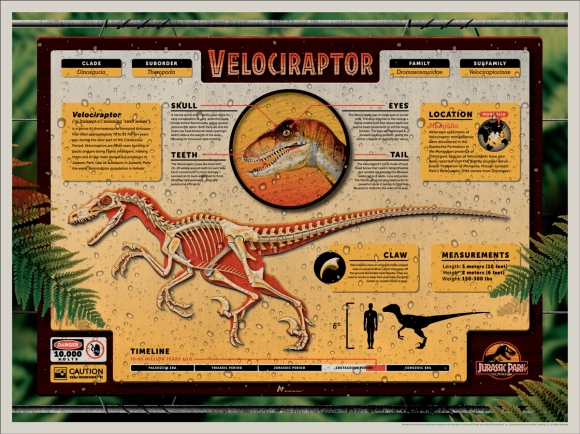 MONDO’s dino-sized gallery show celebrating Jurassic Park and the highly anticipated Jurassic World (in theaters June 12) will feature dozens of artists contributing original works of art and screen prints for one of the all time greatest blockbusters.

“When Dinosaurs Ruled the Earth” will have an opening reception on June 12th from 7:00 -10:00pm. The show will be on display until June 27th.

The films offer a rich world of colossal dinosaurs, gorgeous tropical landscapes and iconic characters for artists to draw their inspiration from. The title of the show “When Dinsoaurs Ruled The Earth” references the climactic scene of Jurassic Park when the T-Rex triumphantly reclaims her dominance at the top of the food chain, making the past tense of that falling banner’s copy ominously incorrect. Now 65 million + 22 years later, dinosaurs are getting their first fully functioning theme park in Jurassic World with all of the terrible implications of how that will go perfectly wrong.

“Hosting an entire gallery exhibit of new Jurassic Park artwork is a dream come true for us. It has been over 20 years since the first film captured the imagination of the entire planet and we hope to recreate some of the wonder and excitement of the franchise with this show,” said Mondo CEO Justin Ismael

Mondo will also offer a limited pressing of the previously sold out Jurassic Park original motion picture soundtrack on Dino DNA Splatter vinyl. The first poster reveal from the show is from artist Francesco Francavilla, depicting the awe-inspiring T-Rex ready to take a bite out of a certain island off the coast of Costa Rica with its inverse composition alluding to another famous Steven Spielberg movie poster featuring a toothy maw. 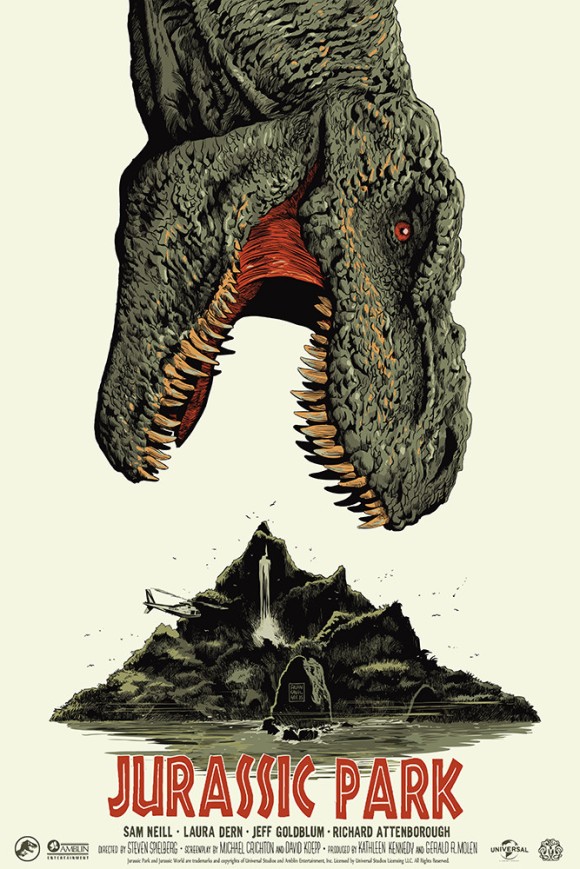 The following artists will be represented at “When Dinosaurs Ruled The Earth.

Remaining prints and original works will go on sale at MondoTees.com at a future date. Follow @MondoNews for more art reveals and information leading up the show! For more information on the gallery, visit MondoTees.com. 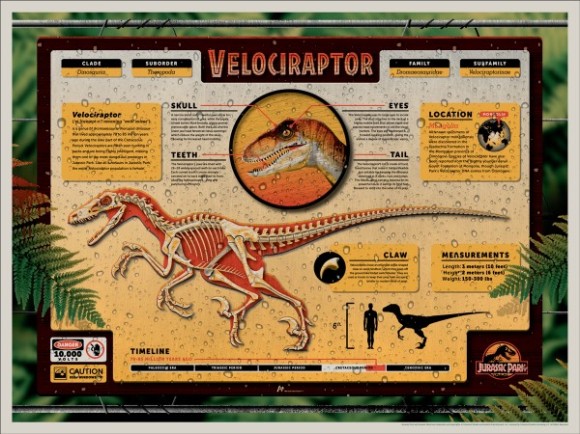 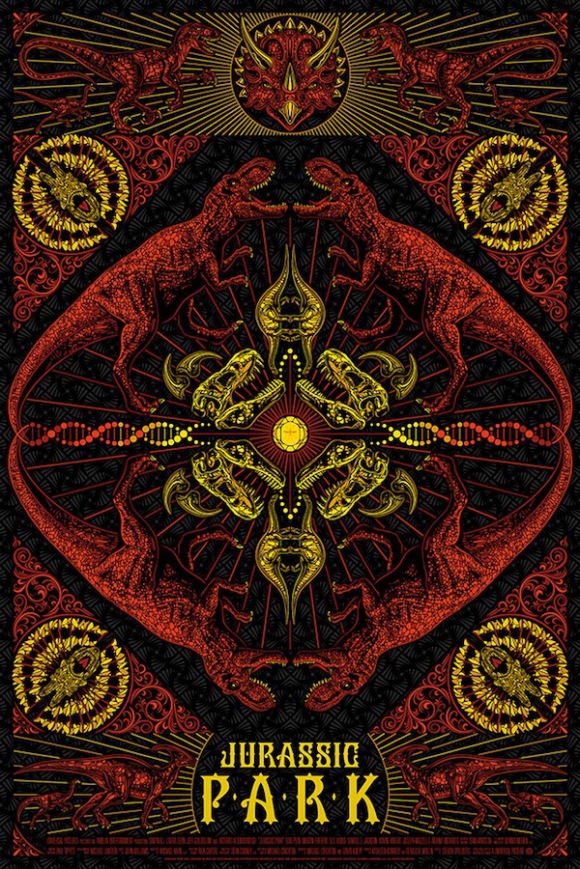 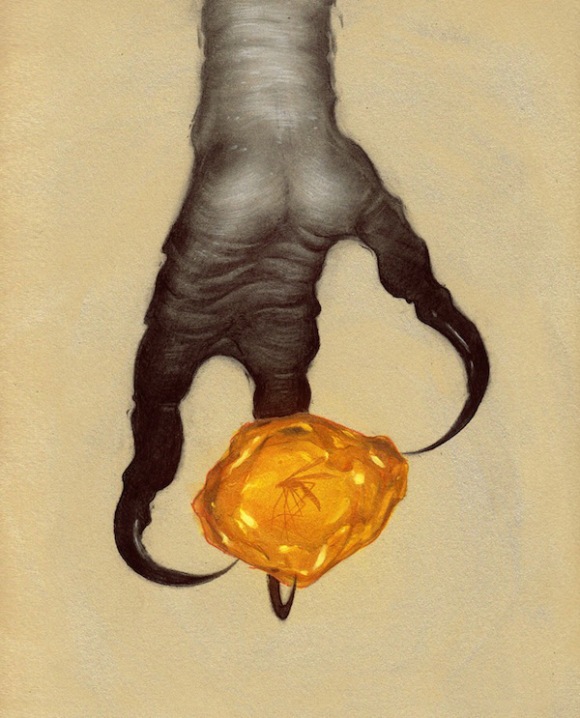 Tomorrow MONDO will release the original motion picture soundtrack for Jurassic Park with artwork by JC Richard. They will also release an LP and poster with artwork by Dan McCarthy. Please follow MONDO on Twitter for the on sale announcement. The vinyl albums and poster will be available online at a random time on Wednesday June 11, 2014.

Mondo To Release Vinyl Soundtrack To Jurassic Park On June 11, 2014

Mondo is excited to announce the release of John Williams’ iconic Original Motion Picture Soundtrack forJurassic Park, remastered for vinyl with gorgeous artwork for two packaging variations from artist JC Richard and a limited edition vinyl from artist Dan McCarthy (1,000 copies). The vinyl releases will be for sale only at MondoTees.com on June 11, 2014.

Jurassic Park occupies a rare place in the hearts of film fans worldwide. It’s one of the few seminal films that almost everyone can recall seeing in the theater for the first time in perfect detail. It’s a movie that fires on all cylinders – from the amazing sense of adventure, a realistic world of tomorrow, awe-inspiring special effects and of course one of the greatest scores that has ever been created. “There are few films where the experience of watching the film is matched only by experience of listening to it, and Jurassic Park is one of those rare films,” said Mondo Creative Director Justin Ishmael. 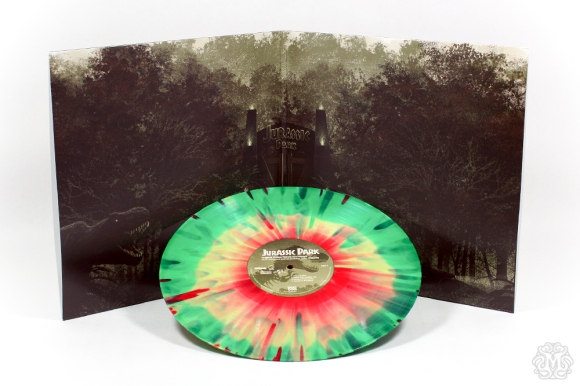 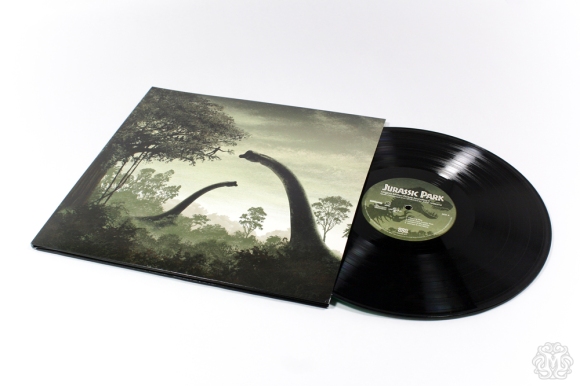 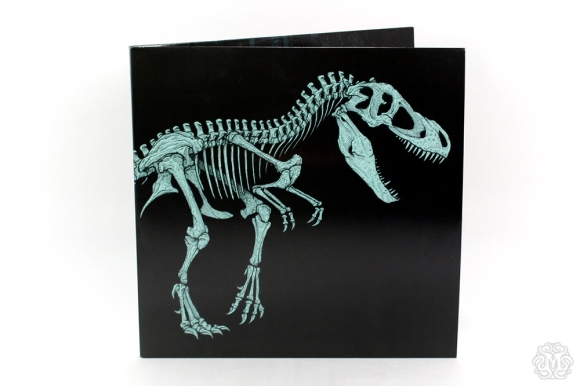 The Jurassic Park vinyl soundtrack release continues Mondo’s commitment to crafting beautiful packaging for scores they love and adds to an impressive collection that now includes Poltergeist, Oblivion, Halloween, Drive, The Omen, Coraline, Paranorman and more with several releases on the horizon for 2014.