Each individual print in DHM’s Nicolas Delort 7-print set measures 18″ x 24,” is hand numbered, and screen printed. The Standard edition set is printed per Nicolas’ hand crafted B&W approach while his Variant’s hue is richly toned and deliberately vintage in feel. There is also a very limited foil edition based on either the Standard or Variant colorway, plus the most select series, only 10 editions, a complete run of all 7 of Nicolas’s “Universal Classic Monsters” pieces individually screened on wood. 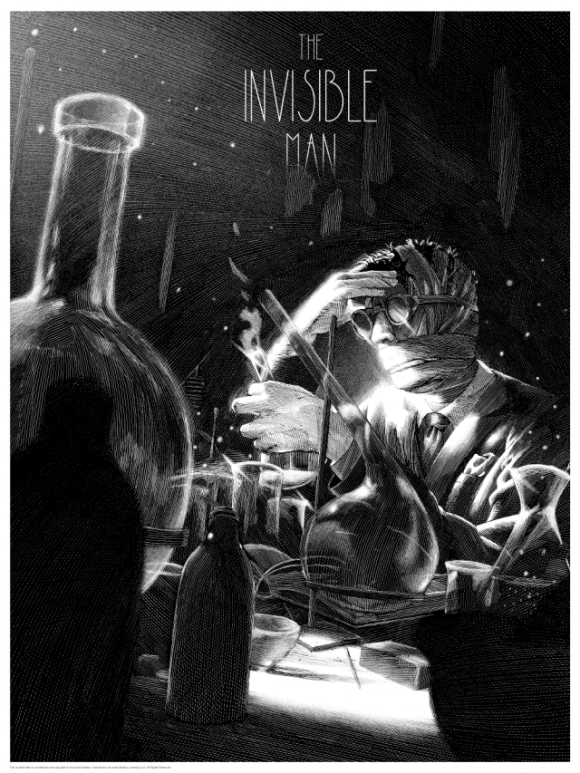 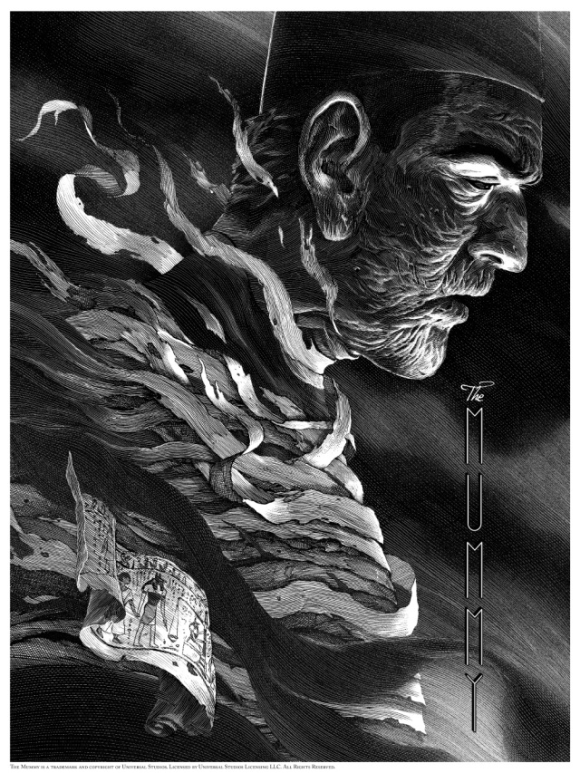 MONDO Announces this Jaws print by Nicolas Delort which will be available At San Diego Comic Con. The 24″ x 36″ print has a limited edition of 375 and will be available at the MONDO booth #835 during Preview Night (Wednesday July 8, 2015).

Dark Hall Mansion To Release King Kong Print By Nicolas Delort On May 15, 2015

Dark Hall Mansion, under license from Warner Bros. Entertainment Consumer Products, has invited leading artist, Nicolas Delort, to take on one of the most influential and groundbreaking of cinema’s early classics. Informed by Willis O’Brien’s legendary stop-motion animation, “King Kong” smashed records on opening at Radio City Music Hall in 1933 and has never looked back since. Its impact shaping generations of filmmakers is undeniable, yet it is Kong’s pathos that forever registers in the hearts of fans. Far from some simple brute, the power and tenderness Kong so eloquently expresses plays out in pioneering and arresting close-ups that still resonate with viewers to this day, Kong’s ending as heartbreaking as it is unforgettable.

Nicolas Delort’s expressed vision for his piece was, from the start, to tell Kong’s tale, organically, to see him in his own domain, the world Kong inhabits. Taking the viewer right to Skull Island, Nicolas’ piece is as much about this mysterious world as it is about Kong himself, and nowhere is this more evocative than in his striking rendering of a cavernous skull and its weeping waterfalls. Nicolas’ “King Kong” print beautifully ties back, mid, and foreground, the native’s massive gates at rear, Kong’s engaged prehistoric battle, and finally, Carl Denham’s camera quietly piercing the jungle, placing the viewer right with the intrepid film crew as it first comes upon the majestic ape. As always, Nicolas brings his striking detail work to bear and compliment his composition and story, while elegant finishing touches, such as his title treatment, herald what’s to come in New York and further showcases his skills.

In a very special surprise for fans, ALL Standard and Variant Nicolas Delort “King Kong” editions will be screen printed on foil, inclusive of metallic ink highlights. There will be a Standard B&W 5-color (2 colors being metallic) screen printed foil edition, and a Variant Sepia-toned 5-color (2 colors being metallic) screen printed foil edition, both measuring 20″ x 30,” and all editions hand-numbered. There will also be two select, giclee printed canvas editions, one with Nicolas’ unique and moody lavender color scheme, the other based on Nicolas’ original B&W vision. 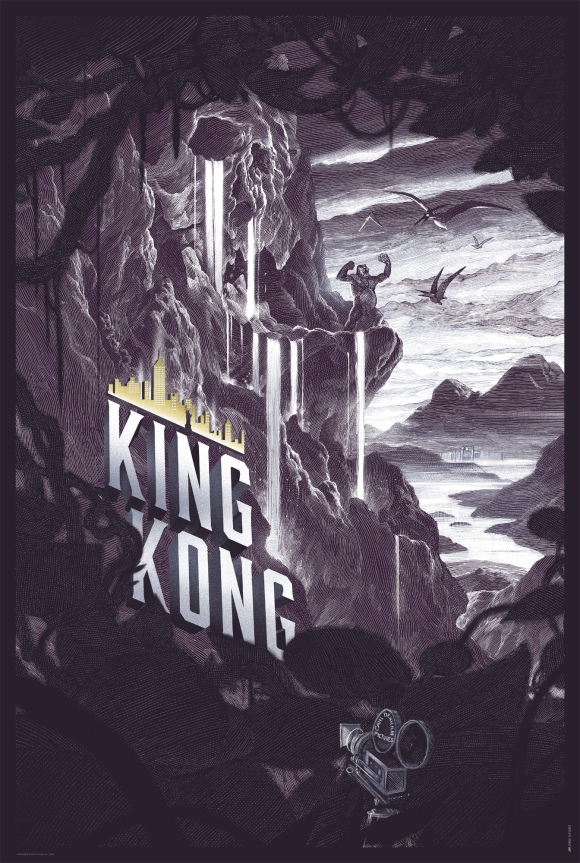 MONDO To Release The Fellowship of The Ring Print By Aaron Horkey & The Hobbit Prints By Ken Taylor & Nicolas Delort On December 16, 2014

Today MONDO will release Aaron Horkey’s The Fellowship of the Ring, closing out his Lord of the Rings poster series that’s been three years in the making. The poster depicts Gandalf’s battle against the Balrog in the Mines of Moria with an incredible attention to detail.

Additionally, timed with the release of the The Hobbit: The Battle of the Five Armies hitting theaters this week, MONDO will have posters for the previous two films, The Hobbit: An Unexpected Journey by Ken Taylor & The Hobbit: The Desolation of Smaug by Nicolas Delort, available in the shop!

Please follow MONDO on Twitter for the on sale announcement. These posters will be available online at a random time on Tuesday, December 16, 2014.

Dark Hall Mansion’s yearly holiday tradition continues with the timeless classic that’s informed Christmas and the holiday season for almost 50 years, Charles M. Schulz’s 1965 masterpiece, “A Charlie Brown Christmas,” this year beautifully and evocatively rendered by artist, Nicolas Delort. Flawlessly written by Charles Schulz, beautifully directed and animated by Bill Melendez and team, and of course, brilliantly scored by Vince Guaraldi, this film, perhaps more than any other, quietly, humorously, and evocatively reminds us in poetic and lyrical fashion just what the true meaning of Christmas really is.

Dark Hall Mansion, under license from Peanuts Worldwide, takes us back to our collective memory of gathering about the TV while awaiting Christmas and the holidays and having Guaraldi’s first gentle jazz passages signal the season truly was upon us. Charles M. Schulz’s 1965 masterpiece is timeless, precisely because its profound emotional resonance is as relevant today as it will be in another fifty years and beyond. Artist Nicolas Delort, who brought such pathos to Dark Hall Mansion’s “It’s the Great Pumpkin, Charlie Brown,” again brings his distinctive and highly detailed style to bear rendering Charlie’s contemplation of the true meaning of Christmas a quiet and personal one. 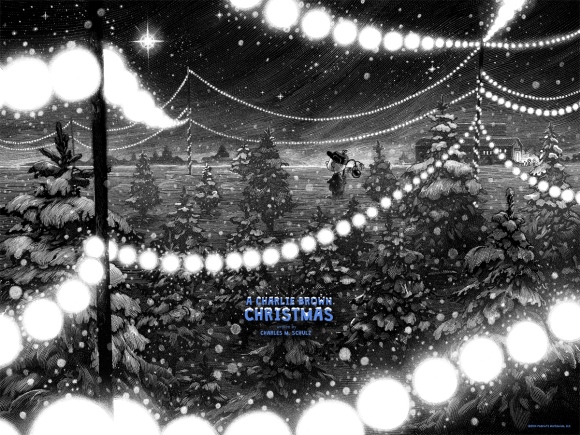 Dark Hall Mansion will release “It’s The Great Pumpkin Charlie Brown” prints by Nicolas Delort on October 2, 2014. Follow DHM on Twitter for the on sale announcement.

MONDO To Release Jaws Poster By Cesar Moreno & Where The Wild Things Are Poster By Nicolas Delort On April 17, 2014

Tomorrow MONDO will release a Jaws poster by Cesar Moreno and a Where The Wild Things Are poster by Nicolas Delort. Please follow MONDO on Twitter for the on sale announcement. These posters will be available online at a random time on Thursday, April 17th. 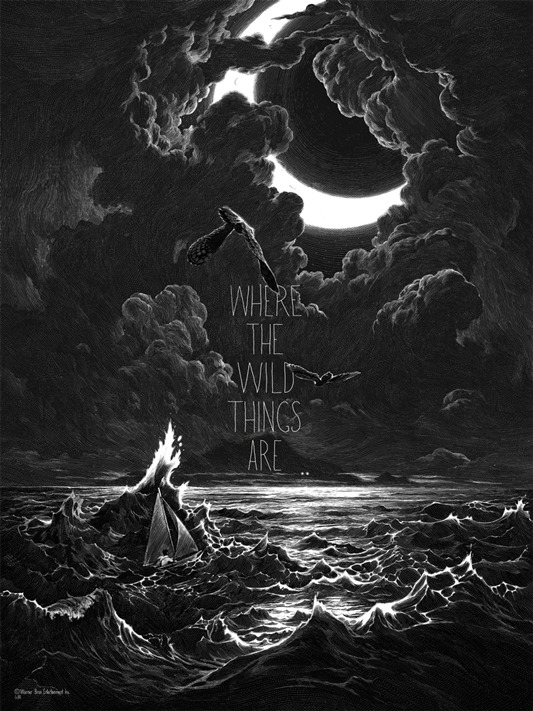