Imagine this staring at you from inside the concrete chamber of a storm drain.

We’ve already gotten a close-up of Pennywise the Clown from the new film version of Stephen King’s It (out Sept. 8, 2017), but here we step back for a fuller view of the creature that likes to take the form of a leering, sinister clown.

Bill Skarsgård is playing the ageless, supernatural beast who feeds on the fears of children, and it’s clear director Andy Muschietti (Mama) is steering away from the modern, baggy-suited, rainbow-hued clown for something a bit more… archaic.

For that, the filmmaker relied on Emmy-winning costume designer Janie Bryant (Deadwood, Mad Men) who crafted a form-fitting suit that draws upon a number of bygone times – among them Medieval, Renaissance, Elizabethan, and Victorian eras.

There’s a classic Harlequin quality to the elegant red lines, drawing up his cheeks like fangs to bisect his eyes. In this new image, we can more clearly see the fissures in the caked-on makeup atop his domed brow, resembling the sutures in the plates of a skull.

We even get a hint of his yellow, buck-toothed smile – or might those  be something sharper?

His neck is frilled by a thick, puffy collar, like a ruff from the late 16th century, and here’s where we zoom in and venture into geek-out territory for costume enthusiasts. Every part of the costume is meant to suggest something both ancient and disturbed. 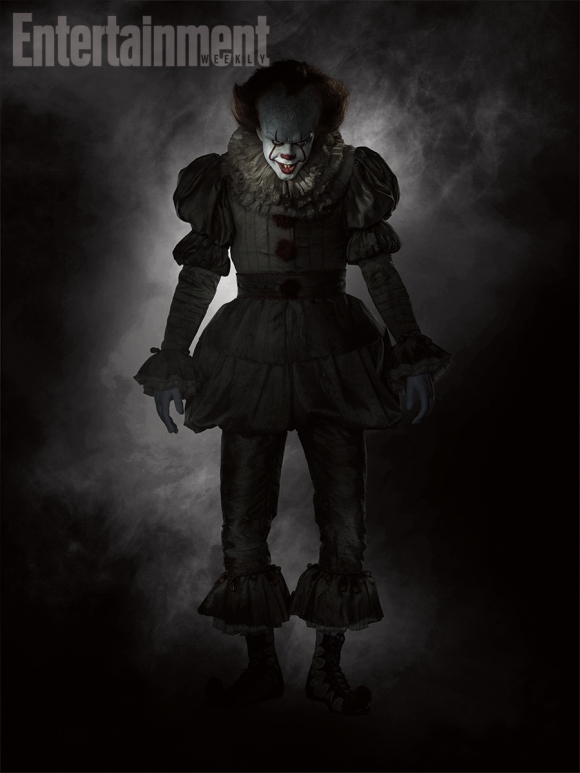 First Look At The New Pennywise From Stephen King’s IT 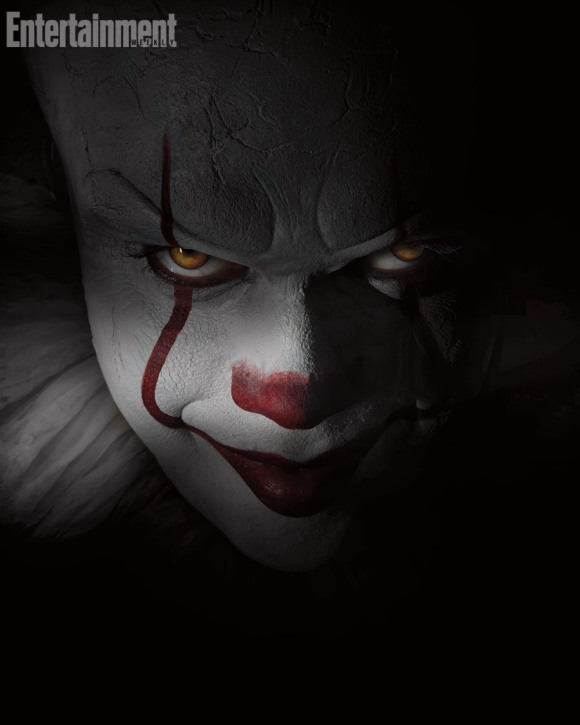 Entertainment Weekly has revealed the first official look at Bill Skarsgard as Pennywise the Dancing Clown from Stephen King’s IT.

“It’s such an extreme character. Inhumane,” Skarsgård tells the outlet. “It’s beyond even a sociopath, because he’s not even human. He’s not even a clown. I’m playing just one of the beings It creates…It truly enjoys the shape of the clown Pennywise, and enjoys the game and the hunt. What’s funny to this evil entity might not be funny to everyone else. But he thinks it’s funny.”

EW also reports that the events of the film will be moved upward from the source material, which was set in both the 1950s and 1980s, and will be set in the present day with the late 1980s as the past setting.

Based on the novel by Stephen King, the film’s story recalls a promise made twenty-eight years ago that forces seven adults to reunite in Derry, Maine, where as teenagers they battled an evil creature that preyed on the city’s children. Unsure that their Losers Club had vanquished the creature all those years ago, the seven had vowed to return to Derry if IT should ever reappear. Now, children are being murdered again and their repressed memories of that summer return as they prepare to do battle with the monster lurking in Derry’s sewers once more.

The film is set to be released in two parts with Part One focusing on the group of teens called the Losers Club, while Part Two is set around the repercussions on these characters as adults. Stephen King’s IT Part One will be released on September 8, 2017.

The remake is being produced by Dan Lin, Roy Lee, Seth Grahame-Smith and David Katzenberg.

IT was previously adapted into a television miniseries in 1990 from director Tommy Lee Wallace and featured Tim Curry’s iconic performance as the title character. The feature film remake has been in-development for some time and was previously going to be directed by auteur Cary Fukunaga (Beasts of No Nation, True Detective) with the young English actor Will Poulter (We’re the Millers, The Maze Runner) originally cast as Pennywise.