Crossovers are nothing new in comics, whether it’s a meeting between characters you don’t normally see together or even a collision of two different publishers’ universes — but there’s something unusual about the forthcoming Hell & Gone, a crossover between IDW Publishing’s Locke & Key series and The Sandman, the legendary DC Vertigo title that made Neil Gaiman’s name in comics back in the early ’90s.

These two worlds meeting is an intriguing prospect — and, at a digital New York Comic Con panel, Locke & Key creators Joe Hill and Gabriel Rodríguez teased a little of what we can expect from the crossover.

Despite coming out two decades apart, and from two different publishers, the two books do have a lot in common — and not just because both are being adapted by Netflix. The second season of Locke & Key is currently filming, while an 11-episode Sandman series is in development with Wonder Woman writer Allan Heinberg, Batman Begins writer David S. Goyer, and Gaiman himself as showrunners.

For now, at least, this crossover is strictly comics-based. The more important connection here is that The Sandman and Locke & Key are both excellent fantasy comics that work by taking a recognizable version of our world and then laying a mythology just beneath its surface.

In the case of Sandman, that’s the world of dreams — and of Dream, gothy embodiment of all things oneiric, who tries to keep the dreamworld, and his godlike siblings, in check. Meanwhile, Locke & Key’s fantastical elements all stem from the discovery of whispering iron, a metal from another dimension that grants otherworldly properties to anything forged from it.

Namely, keys. Keys created, lost, and later discovered by assorted generations of the Locke family that give their user command over the shadows, turn them into an animal, or let them (literally) get inside someone’s head.

Before Joe Hill and Gabriel Rodriguez’s Locke & Key/Sandman comic comes out later this year, they have a prequel planned.

The new Locke & Key story. “In Pale Battalions Go” is a two-parter that will set up the Locke & Key/Sandman Universe crossover. It’s also a key storyline in World War Key 0: The Golden Age, another upcoming project.

Joe Hill shared, “I was a little anxious about returning to Keyhouse for a real, no-bullshit, ongoing storyline. Then I got going and the story took off. The first issue was the easiest, most frictionless writing I’ve done all year (I haven’t started the second issue yet, so no idea how I’ll do with the dismount). I guess I’m more comfortable writing tales set in this world than I am doing any other kind of make-believe, and maybe that’s no surprise. I’ve lived in Lovecraft, Massachusetts for almost 15 years now. I know the territory.”

Morpheus, the raven-haired Lord of Dreams, has existed for much of creation and has traveled far and wide throughout that time. His presence has been felt at the dawn of mankind, in the discoveries of the European Renaissance, along the abandoned corridors of hell, in the myths of feudal Japan and along London streets on the eve of the new Millenium. He’s been nearly everywhere, it seems. So, perhaps we shouldn’t be surprised to learn he’ll soon be seen on Netflix. 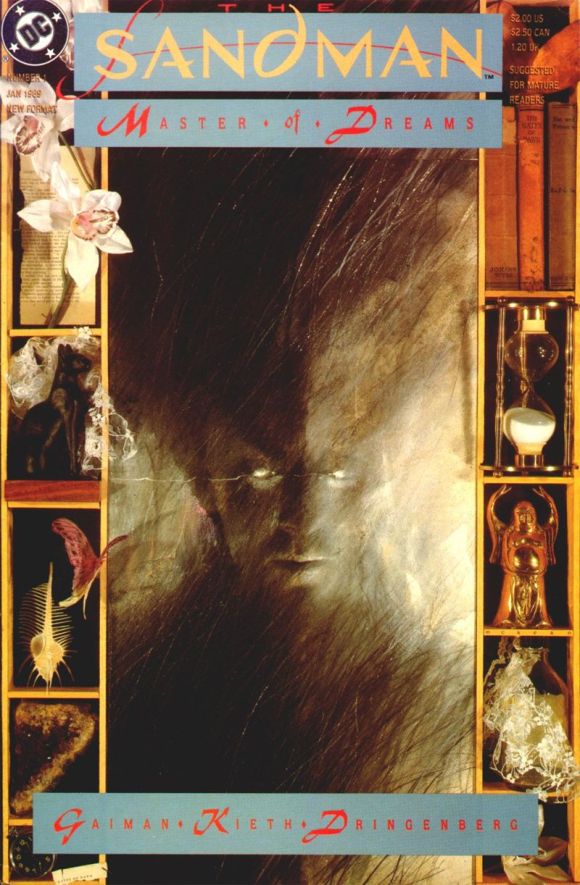 Yes, for the first time since his introduction in 1988, Neil Gaiman’s The Sandman will live in a medium other than comics. Confirmed today by Netflix, the beloved and highly influential comic fantasy has received a series order for a live action TV show from executive producers Gaiman, Allan Heinberg and David S. Goyer. While very little is known about the direction of the series, the award-winning comic was written for mature readers and unspooled as a combination of standalone and serialized stories that introduced Morpehus and his six equally compelling siblings. 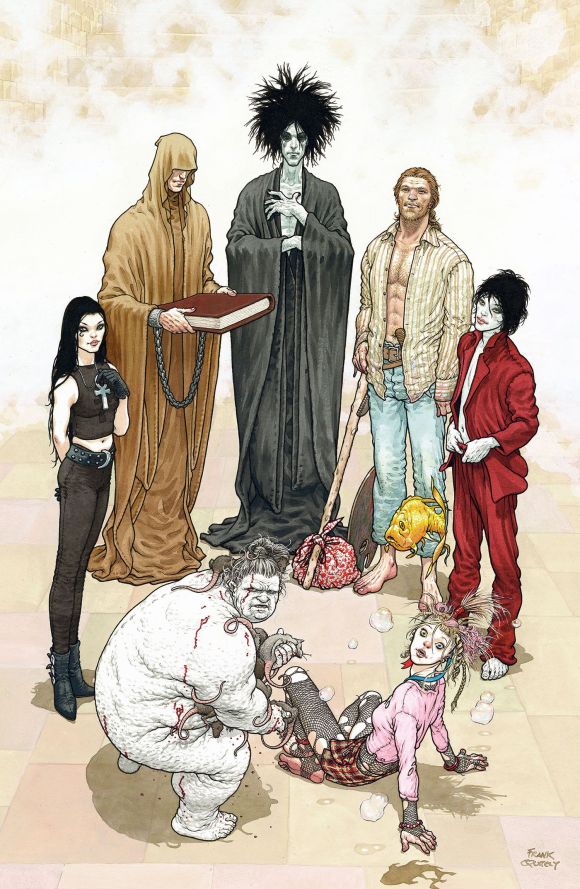 “We’re thrilled to partner with the brilliant team that is Neil Gaiman, David S. Goyer and Allan Heinberg to finally bring Neil’s iconic comic book series, The Sandman, to life onscreen,” said Channing Dungey, VP, Original Series, Netflix. “From its rich characters and storylines to its intricately built-out worlds, we’re excited to create an epic original series that dives deep into this multi-layered universe beloved by fans around the world.”

Gaiman famously created his version of The Sandman when then DC editor (and eventual Vertigo Comics founder) Karen Berger requested a fresh take on the classic Golden Age comic character. The Sandman comic told the tale of Morpheus, AKA Dream, a powerful, near immortal being who presided over the realm of Dreams as he attempted to correct mistakes he’d made over the course of his existence. Gaiman’s ongoing Sandman comic ran for seven years, but has been occasionally revisited in limited series and was recently revived via four ongoing, original titles set within its universe. However, it’s the original 75-issue series that captured the imagination of readers worldwide—many of them entirely new to comics—and helped to launch the career of Gaiman. Over thirty years after its debut, The Sandman continues to remain a seminal, highly acclaimed work of fantasy.

DC Entertainment announces the creation of The Sandman Universe, a new Vertigo line of comic books curated by Neil Gaiman, conjuring epic storytelling, immersing readers into the evolving world of the Dreaming. The Sandman Universe begins with four new ongoing series, existing in a shared universe, building upon Gaiman’s New York Times best-selling series that lyrically weaved together stories of dreams and magic. 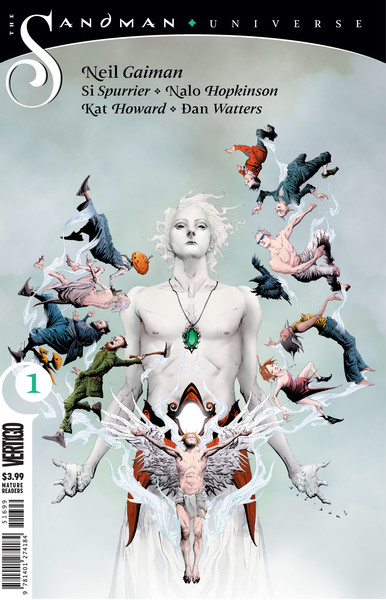 “The Sandman Universe has always been very close and personal to me and I am thrilled to open up the world once again to an extremely talented group of writers and artists,” explains Gaiman. “I get to see the joy in these brilliant people whom I’ve selected, as they get their chance to play in this world.”

Each writer was hand-selected by Gaiman for the following series:

The new line will begin August 8, 2018 with The Sandman Universe #1, a one-shot story plotted by Gaiman and co-written by the four series writers. The issue will reintroduce the Sandman Universe and its characters, while establishing conflicts that will be examined in the monthly comic books., The Dreaming and House of Whispers will debut in September with Lucifer and Books of Magic hitting shelves in October.

Vertigo is helmed by Executive Editor Mark Doyle, who returned to Vertigo last year after over-site of the Batman group of titles for DC, bringing a new editorial voice to the beloved imprint.

Gaiman continues, “We have a chance to remind people how fun this universe is, and with the new editorial direction from Mark Doyle, I believe we may create just a bit more magic for years to come.”

“Vertigo changed my life,” states Doyle. “I found Vertigo at a time when I was bored with comics, then I read Sandman and my head exploded. Suddenly I saw all these endless storytelling possibilities. I knew I had to get into comics and I had to get into Vertigo. To return to the imprint and work with Neil Gaiman to expand the Sandman Universe—it’s honestly a dream come true.”

Entertainment Weekly caught up with Gaiman to ask a few questions about The Sandman Universe. Read more HERE.

A rumored lineup of DC Comics feature films has hit today at the just-launched NikkiFinke.com, suggesting that, at July’s Comic-Con International, Warner Bros. will officially announce their superhero slate through 2018!

Following Batman v Superman: Dawn of Justice on May 6, 2016, will be, according to Finke, a Shazam! solo film in July 2016, the Joseph Gordon-Levitt Sandman film the following December, Zack Snyder’s Justice League in May 2017, a Wonder Woman film in July 2017, a surprise Flash and Green Lantern team-up film Christmas of 2017 and a direct Man of Steel sequel in May 2018!

Finke goes on to claim that Justice Leaguers appearing in Batman v Superman: Dawn of Justice include, in addition to Batman, Superman, Wonder Woman and Cyborg, the Flash and a non-Ryan Reynolds Green Lantern. She also suggests that Aquaman will debut in Justice League.

According to Deadline, Joseph Gordon-Levitt is finalizing a deal to produce Sandman at Warner Bros with David Goyer, who pitched his treatment for the Neil Gaiman comic book classic.

It has been rumored that Gordon-Levitt might direct and star as the protagonist. They will hire a writer shortly.

The Sandman series shifts between horror and fantasy, and the central character is Morpheus, the personification of dreams. After being held captive 70 years, Morpheus escapes, gains revenge and rebuilds his crumbling kingdom while trying to adapt to the times.

Gordon-Levitt next stars in another seminal graphic novel-based film, Sin City: A Dame To Kill For, which Robert Rodriguez and creator Frank Miller helmed.