One of the finest known copies of Amazing Fantasy #15, the issue in which Spider-Man made his first appearance sold for a whopping $795,000 at auction.

Amazing Fantasy #15 is one of just six copies known to exist with a 9.4 grade – there are only four known copies with a higher grade – of the issue considered the most valuable and in-demand comic book of the Silver Age. The final price was the highest by a wide margin for a 1960s comic sold through Heritage Auctions (the previous high was $492,937.50).

Todd McFarlane Draws Spawn & Spider-Man Together For The First Time

Spawn creator Todd McFarlane is returning to Spider-Man for the first time in 27 years, drawing Spidey alongside Spawn for a new cover to this year’s Overstreet Comic Book Price Guide.

McFarlane is known for redefining Spider-Man’s look for the 90s, including making his mask’s eyes much larger, pushing his anatomy in increasingly strange ways, drawing more elaborate webs, and darkening the blue portions of Spidey’s suit. He last drew the character in 1991’s Spider-Man #14 after launching that title as both writer and artist.

McFarlane exited Spider-Man to co-found Image Comics where he created Spawn, still running more than 300 issues later. This is the first time McFarlane has drawn Spawn and Spider-Man together.

The cover will grace the 50th volume of the Overstreet Price Guide, expected for release in July. One of the highest-graded copies of one of the most significant comic books of all time could bring $900,000 or more in Heritage Auctions’ Comics Auction March 5-7 in Dallas, Texas.

Amazing Fantasy #15 (Marvel, 1962) is a collector’s prize by any measure, starting with the fact that the issue in which Spider-Man makes his first appearance is universally accepted as the most desirable, in-demand book from the Silver Age. Spider-Man remains one of the most popular superheroes of all time and is considered arguably the most significant contribution to the comic world from iconic writer Stan Lee.

In addition, finding a copy of the 57-year-old issue in such exceptional condition is next to impossible: the offered copy is one of six with a CGC grade of 9.4, and there are only four known to carry a higher grade.

“Finding this comic book in this condition is extraordinarily rare, which is why this copy holds so much appeal to the most serious of collectors,” Heritage Auctions Senior Vice President Ed Jaster said. “It’s the kind of book around which an elite collection can be built.”

The issue, which also features the first appearances of Peter Parker’s (Spider-Man’s) Uncle Ben and Aunt May, with a classic cover by Jack Kirby and is the issue in which Steve Ditko began his legendary tenure as Spider-Man’s primary artist. Sony and Walt Disney Pictures differences over Marvel Studios’ involvement in the next Spider-Man movie has ended! The two studios released a joint statement saying that Kevin Feige will indeed produce the followup to the well-recieved Spider-Man: Homecoming and Spider-Man: Far From Home.

The third Spider-Man film from Marvel Studios is set for a July 16, 2021 release, officially adding another addition to the already crowded Phase 4 release slate. The release date puts the film in direct competition with Paramount’s Mission: Impossible 7, which opens on July 23, 2021. Marvel’s Shang-Chi and the Legend of the Ten Rings opens on February 12, Doctor Strange in the Multiverse of Madness opens on May 7 and Thor: Love & Thunder opens on November 5, 2021, making 2021 the fist year we get FOUR MCU movies!

Feige has had an incredible run of hits as the head of Marvel, including four of the top 10 movies in the U.S. and globally of all time. Not to mention, “Avengers: Endgame” is currently the highest-grossing movie of all time.

Since releasing its first Disney-produced Marvel movie in 2012, the company has earned more than $18.2 billion at the global box office.

“I am thrilled that Spidey’s journey in the MCU will continue, and I and all of us at Marvel Studios are very excited that we get to keep working on it,” said Feige. “Spider-Man is a powerful icon and hero whose story crosses all ages and audiences around the globe. He also happens to be the only hero with the superpower to cross cinematic universes, so as Sony continues to develop their own Spidey-verse you never know what surprises the future might hold.”

After Disney and Sony Pictures failed to reach new terms, Marvel Studios president Kevin Feige will not be producing any more Spider-Man films following a dispute between the two companies that has lasted for a few months.

The outlet notes that two Spider-Man movies are currently in the works with star Tom Holland and director Jon Watts, meaning Feige will not be the lead producer of those movies as Marvel Studios will apparently no longer have any future involvement in the Spider-Man universe.

The fallout comes after Sony turned down Disney’s offer that future Spider-Man movies be a 50/50 co-financing arrangement. In turn, Sony offered to keep the same arrangement under the current terms with Marvel receiving about 5% of first-dollar gross, and Disney rejecting the offer.

Earlier this year Avengers: Endgame became the highest-grossing film of all time, followed by Spider-Man: Far From Home surpassing Skyfall to become the highest-grossing film ever for Sony, both produced by Feige. Sources told the outlet that Sony feels “they will be fine” without Feige at the producing helm. Watts and Holland are part of the creative template for the upcoming Spider-Man films, along with producer Amy Pascal.

This morning Sony released the following statement to clarify their position on the matter:

“Much of today’s news about Spider-Man has mischaracterized recent discussions about Kevin Feige’s involvement in the franchise. We are disappointed, but respect Disney’s decision not to have him continue as a lead producer of our next live action Spider-Man film.

We hope this might change in the future, but understand that the many new responsibilities that Disney has given him – including all their newly added Marvel properties – do not allow time for him to work on IP they do not own.

Kevin is terrific and we are grateful for his help and guidance and appreciate the path he has helped put us on, which we will continue.”

Every Spider-Man In Film & TV Explained By Kevin Smith

With the release of Spider-Man: Into the Spider-Verse, renowned filmmaker Kevin Smith sat down with Wired to talk about all that is Spider-Man.

Smith, a fan since childhood, shares his memories of Spiderman, explains some of the lesser known versions and offers his honest opinion about every portrayal of the character, in both film and television.

Shortly before he passed away, Spiderman creator and Marvel Legend Stan Lee collaborated with the artist Shag on a Limited Edition Silk Screen print featuring Stan’s most famous creation and a congregation of his most villainous foes. Stan oversaw, gave input to and approved the final product, but unfortunately left this world too soon to sign the print edition as he originally intended.

The Shag store is releasing this print, one of Stan’s final pieces of creative output, as tribute to this giant of comics and pop culture. As is tradition, Stan even asked to make a cameo appearance in the print!

Join the Shag Gallery on Saturday, December 8th, 2018 from 7:00pm until 10:00pm at the West Hollywood Store for Shag’s Tribute to Stan Lee and his “Life is a Great Big Bang Up” print in celebration of the 3rd Anniversary of the Shag store West Hollywood location. Complimentary cocktails and free and open to the public.

Can’t make it then get the pre-event print pricing HERE. 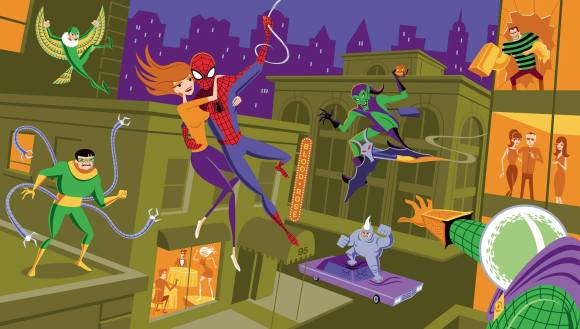 Grey Matter Art, under license from Marvel, is proud to announce a new officially licensed, limited edition screen print for the iconic superhero, Spider-Man and his villains the Sinister Six, by artist, Ian Glaubinger.

The poster goes on sale tomorrow, October 30th at 1PM est. on the GMA homepage. 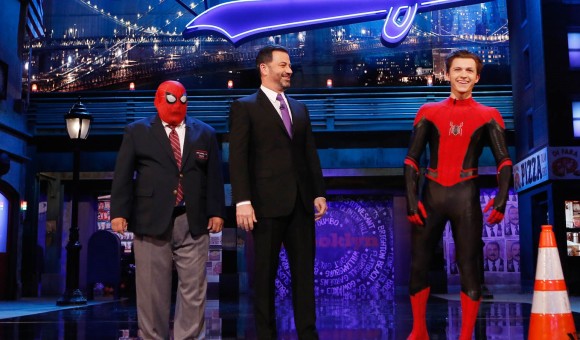 Tom Holland went on Jimmy Kimmel Live! to officially debut his latest Spider-Man costume which is largely faithful to Spidey’s comic book costume, even though it favors red and black over the traditional Spider-Man red and blue.

Holland made his appearance semi in-character during a sketch with Kimmel’s sidekick, Guillermo Rodriguez. Somehow, Guillermo managed to snag Spidey’s mask, and Peter Parker was forced to use another way to hide his identity. Shortly thereafter, Holland unmasked and plugged his Spider-Man sequel. But when Kimmel pressed Holland on whether the movie took place after Infinity War, the web-slinging actor proved to be evasive with his answers.

Spider-Man: Far From Home will be released on Friday, July 5.

The Domino King has been enjoying the PS4 Spider-Man game, so he thought he’d make a tribute to the friendly neighborhood superhero. It took him about a week and 36,186 dominoes to complete the maze.