Kiefer Sutherland And Joey King Star In The Creepshow Halloween Special, Based On Stories By Stephen King And Joe Hill 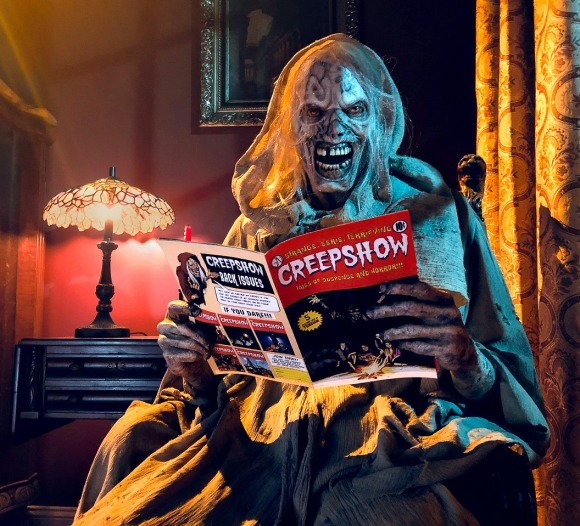 “Survivor Type,” based on the short story by Stephen King and adapted by Nicotero, stars Sutherland as a man determined to stay alive alone on a deserted island no matter what the cost. “Twittering from the Circus of the Dead,” based on the short story by Joe Hill and adapted by Melanie Dale, stars King as a teen whose family road trip includes a visit to the gravest show on earth.

“Halloween wouldn’t be complete without Creepshow, so with the help of the father and son team of Stephen & Joe as well as a fantastic animated format, we get to continue the tradition and spirit of Halloween,” said Nicotero.

“Although season 2, now in production, has been delayed due to Covid, Greg and his team were still able to pull off this fantastic special so everyone will be able to enjoy a little bit of Creepshow during Halloween season,” said Craig Engler, Shudder’s General Manager. 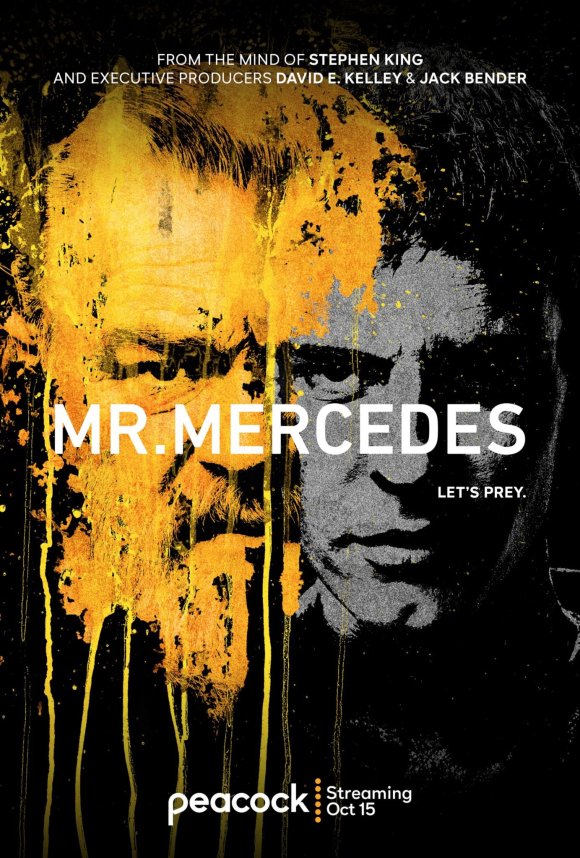 The first two seasons will premiere exclusively on the NBCUniversal streaming service on Thursday, October 15, with a premiere date for Season 3 TBD. The announcement came Monday, on King’s birthday.

The fate of the series, which previously aired on AT&T Audience Network, had been in limbo since Audience announced in the spring that it was ceasing operations and transitioning into a preview channel for the WarnerMedia streaming service HBO Max, which is also owned by AT&T.

Mr. Mercedes follows a retired detective who is tormented by a serial killer (Brady Hartsfield, aka Mr. Mercedes, played by Harry Treadaway) through a series of letters and e-mails, causing him to set out on a dangerous and potentially felonious crusade to protect his loved ones and himself.

Kelley serves as executive producer and wrote the series alongside Stephen King and Sophie Owens-Bender. Jack Bender serves as director. 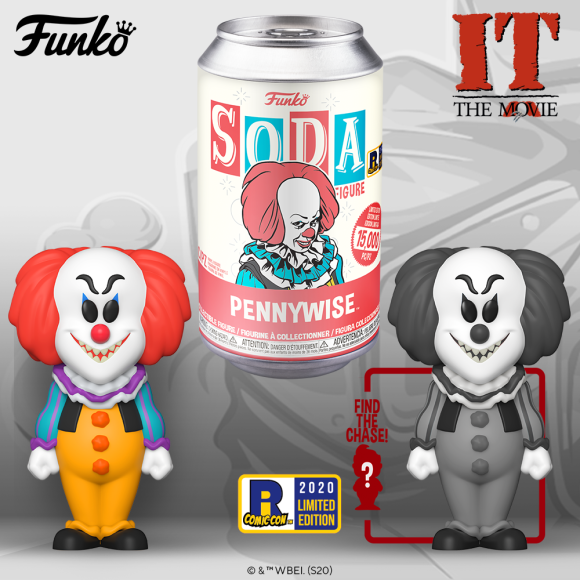 This Funko Soda Pennywise – Rhode Island Comic Con Exclusive will be available on www.thetoyvault.com the weekend of November 6-8th, 2020 for $15 each with a limit of 2 per person.

Limited stock will be available at all 5 Toy Vault locations that same weekend.

The tem is limited to 10,000 in the USA with RICC sticker and 5000 international without sticker. The Black and White Chase is a 1/6 ratio. 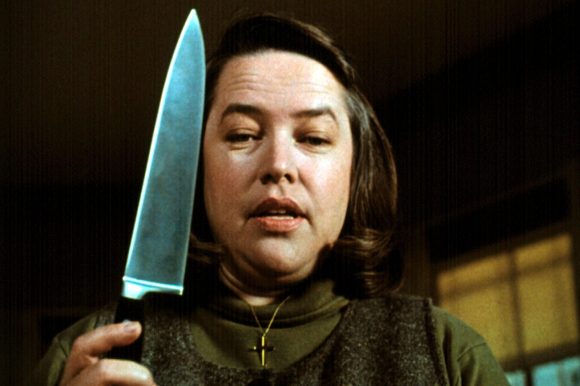 On each episode of The Kingcast podcast, pop culture writers Scott Wampler and Eric Vespe discuss a different adaptation of Stephen King’s work with help from a guest.

“Scott said, ‘We should have it be not just about the books but about the adaptations,'” explains Vespe. “We hoped that we could get a lot of these people that we’ve met and become friendly with over the years to join up and luckily some of them have.”

Since the podcast premiered this spring, the pair’s guests have included actors Kumail Nanjiani, Thomas Jane, and Elijah Wood; directors Karyn Kusama, Mike Flanagan, and Scott Derrickson; and writer Seth Grahame-Smith, among others.

“The key is, we’re allowing the guest to decide what adaptation they want to talk about,” says Wampler. “It’s revealed all these personal connections that people have with the material. Elijah Wood came on and did Misery, and he hadn’t actually read Misery, but he’d seen the movie. He was able to talk about his experience with fandom through the prism of Misery. That was a fascinating thing to hear. We have a guest [this week] who is a person who had a very personal connection with ‘Salem’s Lot. They grew up in a small town where it turned out their cub scout leader was a serial killer. I was like, ‘Well, f— yeah, we want to hear about that!'”

A new episode of Kingcast is released on Wednesday. Wampler and Vespe lead us through their own ten favorite Stephen King adaptations, HERE.

Suntup Editions is delighted to present the first of two prints by artist Sam Weber, the art from the first edition cover of Mr. Mercedes.

Published on June 3, 2014, Stephen King described Mr. Mercedes as his “first hard-boiled detective book.” Just days after its publication, King revealed it to be the first volume of a projected trilogy. The novel would be followed by Finders Keepers in 2015 and End of Watch in 2016. Mr. Mercedes won the 2014 Goodreads Choice Award in the “Mystery and Thriller” category, as well as the 2015 Edgar Award for Best Novel from the Mystery Writers of America. In 2017, it was adapted into a crime drama televsion series for the Audience Network starring Brendan Gleeson. Sam Weber’s eye-catching imagery of raining blood can now be enjoyed for the first time without cover text as a beautiful giclée print.

All prints are hand-signed by Sam Weber. Exclusively available through Suntup Editions for your private collection, and limited to just 40 signed copies per size, worldwide. 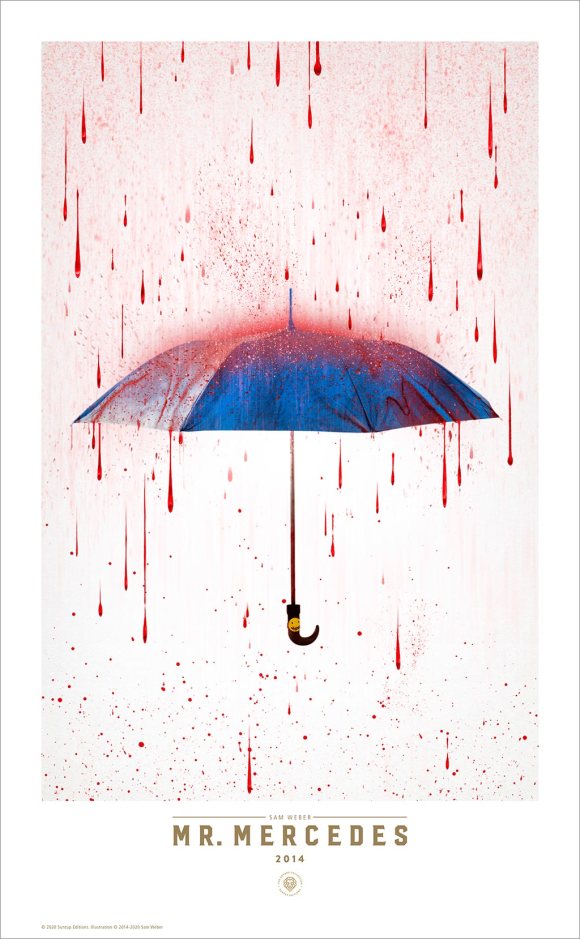 – Museum Quality Giclée prints.
– Signed and authorized by the original cover artist.
– Limited to only 40 copies of each size worldwide, plus 3 Artist Proofs and 3 – Publisher Proofs for private distribution.
– Shipped with a Certificate of Limitation and Authenticity from the publisher.
– Printed on 300 GSM, 100% cotton paper that is Acid-Free, Lignin-Free, Chlorine-Free and with No Optical Brighteners.
– Prints are embossed with the publisher’s mark. 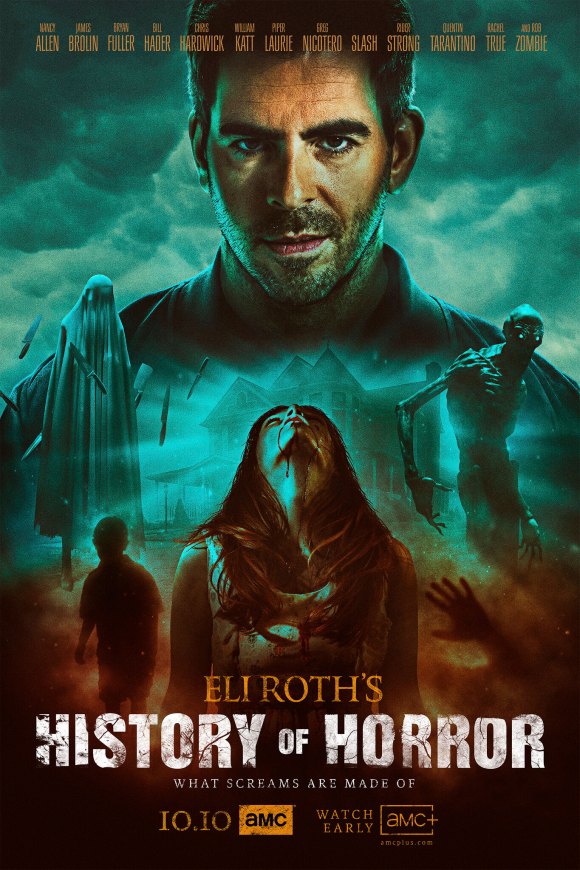 AMC has released the teaser from season two of Eli Roth’s History of Horror premiering Saturday, October 10 at 10:00pm ET/9c.

Season Two of Eli Roth’s History of Horror digs even deeper into the catacombs of creepiness, exhuming landmark films and cult classics while chewing on the entrails of recent horror cinema. The series explores the dark power and wicked fun of scary movies, the craft that went into making them, and the ways that horror films reflect the anxieties of their times. The story is told by Eli Roth and a celebrated cast of writers, directors, actors, cinematographers, composers, and special effects artists who bring our nightmares to life. 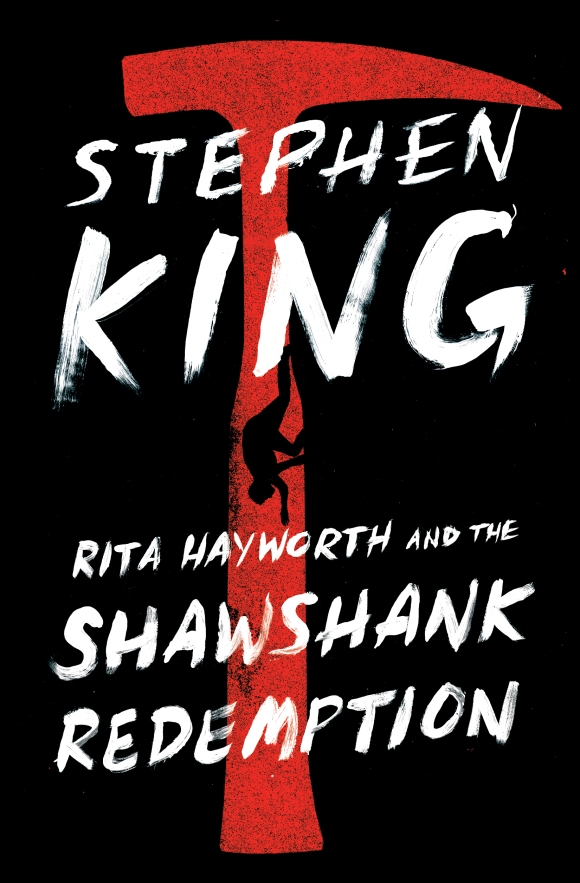 A mesmerizing tale of unjust imprisonment and offbeat escape, Rita Hayworth and Shawshank Redemption is one of Stephen King’s most beloved and iconic stories, and it helped make Castle Rock a place readers would return to over and over again. Suspenseful, mysterious, and heart-wrenching, this iconic King novella, populated by a cast of unforgettable characters, is about a fiercely compelling convict named Andy Dufresne who is seeking his ultimate revenge. Originally published in 1982 in the collection Different Seasons (alongside “The Body,” “Art Pupil,” and “The Breathing Method”), it was made into the film The Shawshank Redemption in 1994. Starring Morgan Freeman and Tim Robbins, this modern classic was nominated for seven Academy Awards, including Best Picture, and is among the most beloved films of all time.

The 128 page trade paperback will be released on September 29, 2020 and it can be pre-ordered HERE.

First A Look At The Stand, A CBS All Access Limited Event Series Based On The Novel By Stephen King 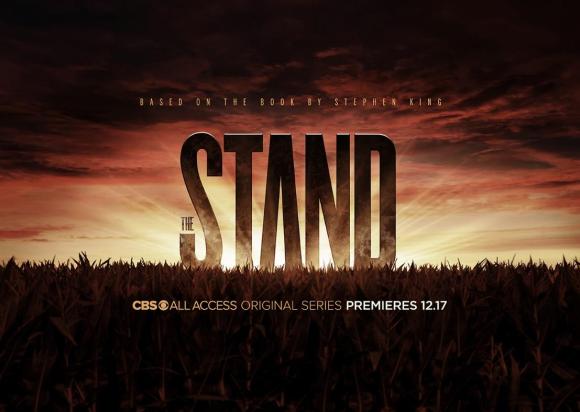 The Stand is Stephen King’s apocalyptic vision of a world decimated by plague and embroiled in an elemental struggle between good and evil. The fate of mankind rests on the frail shoulders of the 108-year-old Mother Abagail and a handful of survivors. Their worst nightmares are embodied in a man with a lethal smile and unspeakable powers: Randall Flagg, the Dark Man.

Based on Stephen King’s best-selling novel of the same name, CBS All Access’ The Stand will close with a new coda written by the famed author himself. The Stand stars Whoopi Goldberg, Alexander Skarsgård, James Marsden, Odessa Young, Jovan Adepo, and many more.

Don’t miss the premiere of The Stand on Thursday, December 17, streaming exclusively on CBS All Access. 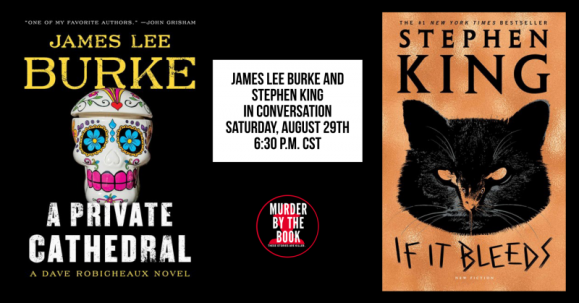 Authors James Lee Burke and Stephen King did a live talk on YouTube today and you can watch it below.

This discussion was hosted by Murder By The Books.

James Lee Burke is a New York Times bestselling author, two-time winner of the Edgar Award, and the recipient of the Guggenheim Fellowship for Creative Arts in Fiction. He’s authored thirty-eight novels and two short story collections. He lives in Missoula, Montana.

Stephen King is the author of more than sixty books, all of them worldwide bestsellers. His recent work includes If It Bleeds, The Institute, Elevation, The Outsider, Sleeping Beauties (cowritten with his son Owen King), and the Bill Hodges trilogy: End of Watch, Finders Keepers, and Mr. Mercedes (an Edgar Award winner for Best Novel and an AT&T Audience Network original television series). His novel 11/22/63 was named a top ten book of 2011 by The New York Times Book Review and won the Los Angeles Times Book Prize for Mystery/Thriller. His epic works The Dark Tower, It, Pet Sematary, and Doctor Sleep are the basis for major motion pictures, with It now the highest grossing horror film of all time. He is the recipient of the 2018 PEN America Literary Service Award, the 2014 National Medal of Arts, and the 2003 National Book Foundation Medal for Distinguished Contribution to American Letters. He lives in Bangor, Maine, with his wife, novelist Tabitha King. 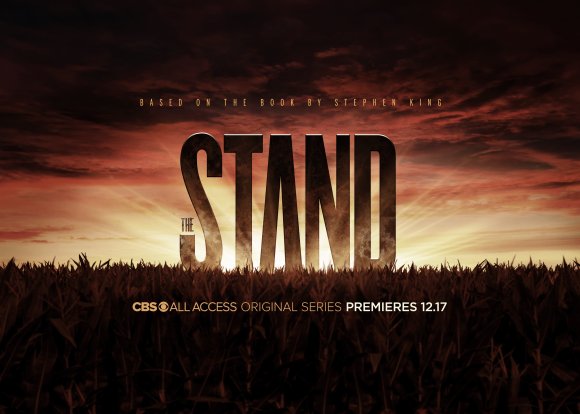 With filming have wrapped just prior to the global pandemic production shutdowns, the highly-anticipated miniseries adaptation of Stephen King’s The Stand from Josh Boone (The New Mutants) has been set for a December premiere date at streaming platform CBS All Access.

The nine-episode series adaptation of Stephen King’s novel from writers Boone and Ben Cavell (SEAL Team), reveals that this is the way the world ends: with a nanosecond of computer error in a Defense Department laboratory and a million casual contacts that form the links in a chain letter of death. And here is the bleak new world of the day after, a world stripped of its institutions and emptied of 99 percent of its people.

A world in which a handful of panicky survivors choose sides — or are chosen. A world in which good rides on the frail shoulders of the 108-year-old Mother Abigail — and the worst nightmares of evil are embodied in a man with a lethal smile and unspeakable powers: Randall Flagg, the dark man. 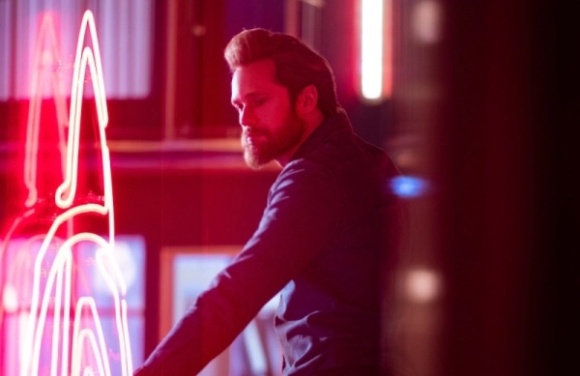 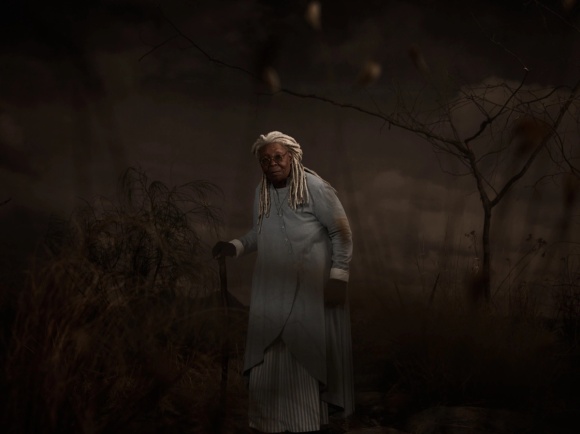 King wrote the tenth and final episode of the series, which will reportedly include a new “coda” to the story that wasn’t part of the author’s novel. Boone will also direct the series for CBS Television Studios. Boone, Roy Lee, Jimmy Miller, Richard P. Rubinstein, and Cavell will executive produce. Will Weiske and Miri Yoon will co-executive produce with Owen King serving as producer.

The Stand is set to premiere on December 17.