In the teaser trailer for season 2 of Mindhunter, a voiceover details a meticulous type of killer who indulges in their own worst fantasies. While this explanation plays out, we see a Rorschach test slowly coming into formation, interspersed with all the usual criminal underpinnings of a procedural series.

In Mindhunter, two FBI agents (Jonathan Groff and Holt McCallany) set out on a sinister investigative odyssey to discover the brutal answers. In addition to the Atlanta Child Murders — which took place between 1979 and 1981 — the new season will likely cover Son of Sam and the reappearance of the BTK Killer.

Along with Groff and McCallany, Mindhunter features Anna Torv (Fringe, Heavenly Sword, The Daughter) and Hannah Gross (Unless, I Used to Be Darker, Take What You Can Carry). The series is directed by David Fincher (Gone Girl, The Social Network, Zodiac), Asif Kapadia (Amy, Senna), Tobias Lindholm (A War, A Hijacking) and Andrew Douglas (The Amityville Horror, U Want Me 2 Kill Him?). Season 2 will feature Damon Herriman (Justified, Quarry) playing Charles Manson, a role he also filled for the upcoming Once Upon A Time… in Hollywood.

Joe Penhall (The Road) created the series. Fincher, Joshua Donen (Gone Girl, The Quick and the Dead), Charlize Theron (Girlboss, Hatfields & McCoys) and Cean Chaffin (Gone Girl, Fight Club) are executive producers. The first season of Mindhunter has been Certified Fresh with a 96% on Rotten Tomatoes, and was lauded by critics for its reinvention of the crime procedural, when it premiered in October 2017. 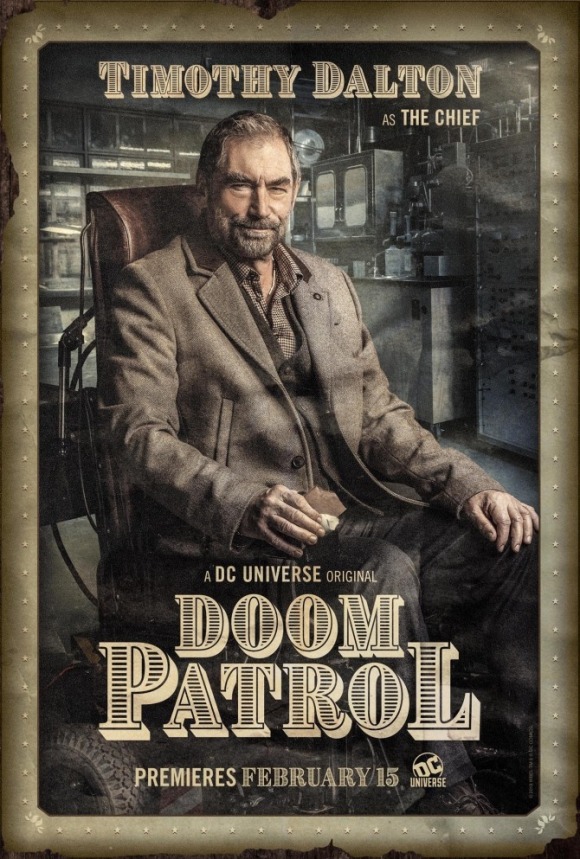 Part support group, part superhero team, the Doom Patrol is a band of super-powered freaks who fight for a world that wants nothing to do with them. Picking up after the events of Titans, Doom Patrol will find these reluctant heroes in a place they never expected to be, called to action by none other than Cyborg, who comes to them with a mission hard to refuse, but with warning that is hard to ignore: their lives will never, ever be the same. 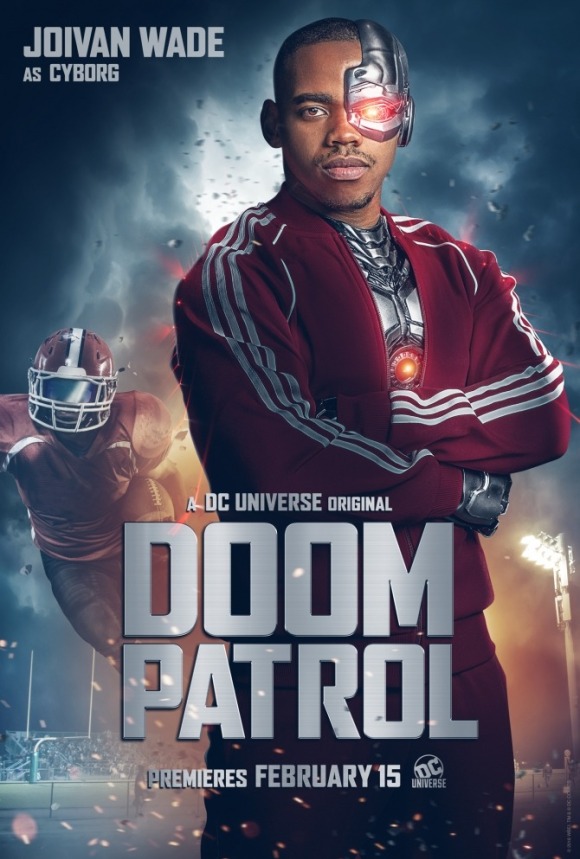 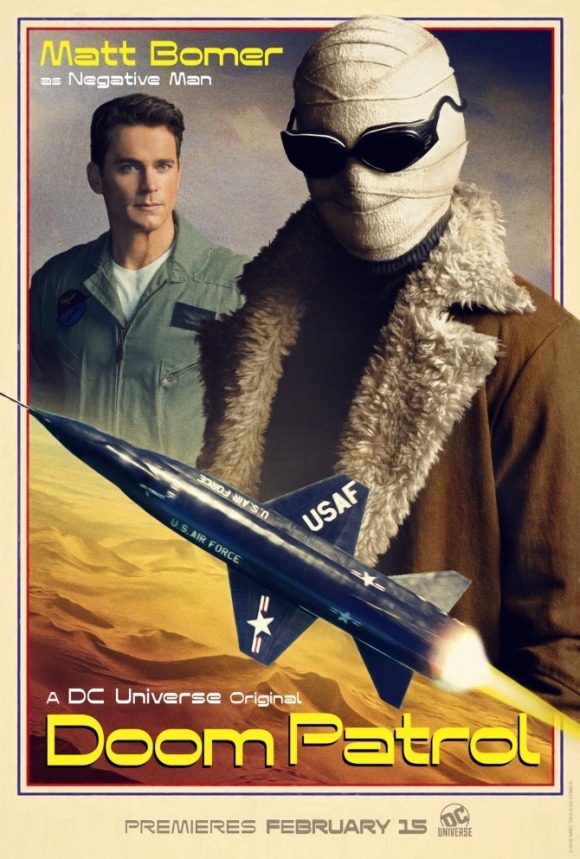 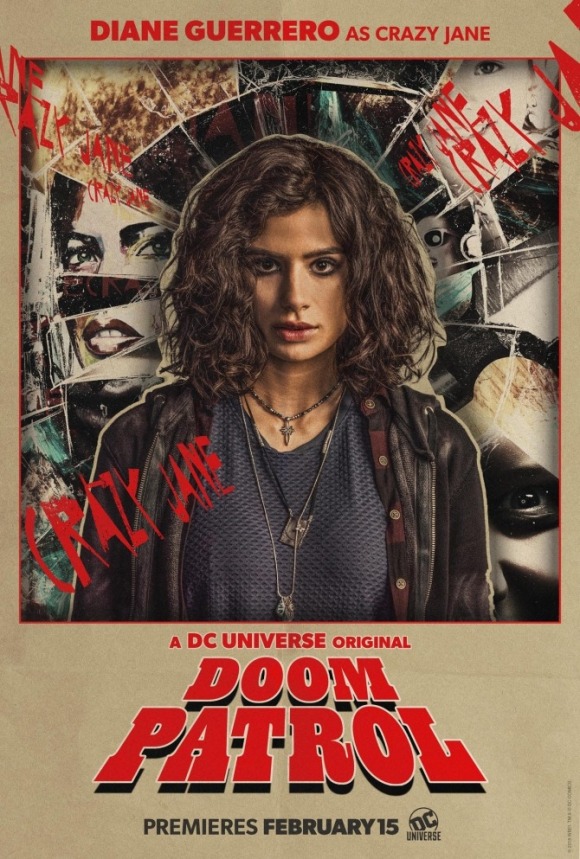 The Doom Patrol characters previously appeared in the fifth episode of Greg Berlanti’s DC Universe live-action drama Titans, with Bruno Bichir, April Bowlby, Jack Michaels, and Dwain Murphy starring. The direct-to-series order of 13 episodes will be written by Supernatural‘s Jeremy Carver and will be executive produced by Berlanti, Geoff Johns, Jeremy Carver, and Sarah Schechter. DC Universe recently announced that another live-action series, Swamp Thing, is being developed for the digital service. The series is being executive produced by James Wan (The Conjuring universe, Saw franchise, The Tommyknockers) and will debut in 2019.

Berlanti, a master of superhero TV shows, has helmed series including All American, Arrow, Black Lightning, DC’s Legends of Tomorrow, The Flash, Riverdale, Supergirl, Blindspot, God Friended Me, The Red Line, The Chilling Adventures of Sabrina, You, and Titans.

You can now watch the teaser trailer for the highly-anticipated third season of Marvel’s Daredevil, which continues the theme of darkness in the new season of the Netflix series.

The third season of Marvel’s Daredevil sees the return of Charlie Cox as Matt Murdock/Daredevil. Also returning for the series are Deborah Ann Woll as Karen Page, with Elden Henson as Foggy Nelson, and Vincent D’Onofrio back as Wilson Fisk aka The Kingpin. Newcomers to the series include Wilson Bethel (Hart of Dixie) as an FBI agent and Joanne Whalley (The Borgias, Gossip Girl, Wolf Hall) as Sister Maggie aka Daredevil’s mother.

The teaser highlights the emotional darkness that Murdock is going through following the events of The Defenders, in which he was presumed dead following the implosion of the building sitting on top of the dragon skeleton, while he was actually recovering in an unknown location with a nun watching over him. Whatever has happened to the former lawyer in the time between has clearly taken a toll, as he’s now prepared to remain in the suit forever instead of returning to his old life.

Erik Oleson will be the new showrunner for the series, replacing Douglas Petrie and Marco Ramirez, who were co-showrunners on the second season of the series. Steven DeKnight was the showrunner in the inaugural season. 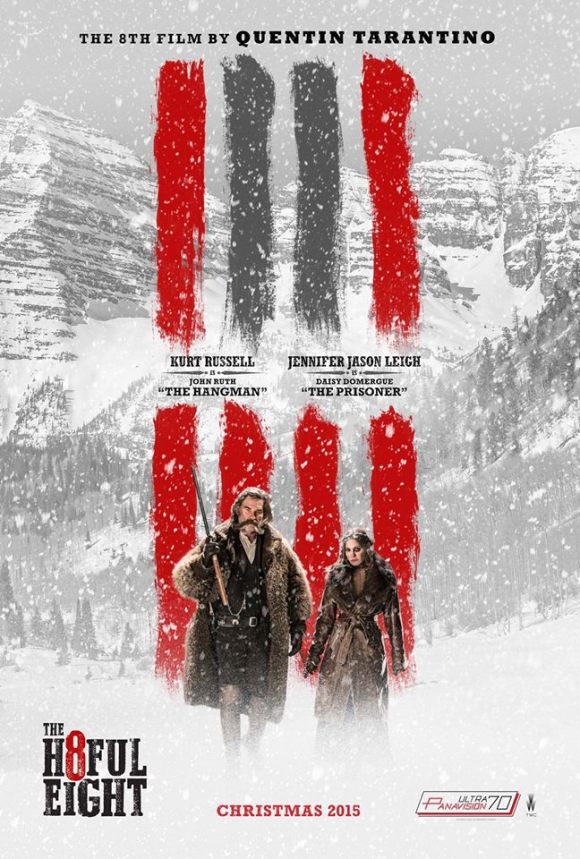 In Quentin Tarantino’s The Hateful Eight, set six or eight or twelve years after the Civil War, a stagecoach hurtles through the wintry Wyoming landscape. The passengers, bounty hunter John Ruth (Kurt Russell) and his fugitive Daisy Domergue (Jennifer Jason Leigh), race towards the town of Red Rock where Ruth, known in these parts as “The Hangman,” will bring Domergue to justice. Along the road, they encounter two strangers: Major Marquis Warren (Samuel L. Jackson), a black former union soldier turned infamous bounty hunter, and Chris Mannix (Walton Goggins), a southern renegade who claims to be the town’s new Sheriff. Losing their lead on the blizzard, Ruth, Domergue, Warren and Mannix seek refuge at Minnie’s Haberdashery, a stagecoach stopover on a mountain pass. When they arrive at Minnie’s, they are greeted not by the proprietor but by four unfamiliar faces. Bob (Demian Bichir), who’s taking care of Minnie’s while she’s visiting her mother, is holed up with Oswaldo Mobray (Tim Roth), the hangman of Red Rock, cow-puncher Joe Gage (Michael Madsen), and Confederate General Sanford Smithers (Bruce Dern). As the storm overtakes the mountainside stopover, our eight travelers come to learn they may not make it to Red Rock after all…

The film will be released on Christmas 2015.

Universal Pictures has released a teaser trailer for the upcoming film Jurassic World that announces, “The Park Is Open.” The teaser also states that the first official trailer for the film will be released on Thanksgiving Day, November 27th, 2015.

Jurassic World is the latest sequel to the 1993 Steven Spielberg classic Jurassic Park, about a theme park built around dinosaurs cloned from preserved DNA. Though the teaser is brief it appears to show that in the new film the park has been reopened under the name “Jurassic World.” Chris Pratt stars in the film, and Spielberg has returned as the executive producer. The film will be released in theaters on June 12th, 2015.

Star Wars Rebels takes place between Star Wars: Episode III and IV, a time period previously unexplored on-screen, as the Empire cements its power and a rebellion begins to form.

The Muppets return in this Euro-set adventure that pits them against the dastardly Constantine, a dead ringer for Kermit who sparks a fun-filled caper for the gang. Ricky Gervais, Tina Fey, and Ty Burrell head up the human cast, with James Bobin from a script he wrote with Nicholas Stoller.

Disney’s Muppets Most Wanted opens in US theaters March 21, 2014. Having recently lost his job and his girlfriend, 30-year-old Tom Chadwick has a rather unsure sense of his own identity. But when he inherits a mysterious box of belongings from a great aunt he never met, Tom starts investigating his lineage and uncovers a whole world of unusual stories and characters, acquiring a growing sense of who he and his real family are.

Family Tree starts on May 12th.

Following its debut on the MTV Movie Awards, Lionsgate has brought online the first trailer for The Hunger Games: Catching Fire.

The Hunger Games: Catching Fire begins as Katniss Everdeen has returned home safe after winning the 74th Annual Hunger Games along with fellow tribute Peeta Mellark. Winning means that they must turn around and leave their family and close friends, embarking on a “Victor’s Tour’ of the districts. Along the way Katniss senses that a rebellion is simmering, but the Capitol is still very much in control as President Snow prepares the 75th Annual Hunger Games (The Quarter Quell) – a competition that could change Panem forever.

Pixar and Walt Disney Pictures have released a new teaser trailer for their upcoming animated film, Monsters University. It gives a comedic look at monsters Mike (John Goodman) and Sulley (Billy Crystal) as they begin their college journey and embrace their newly found friendship. The film will be released in theaters on June 21, 2013.

Mike Wazowski and James P. Sullivan are an inseparable pair, but that wasn’t always the case. From the moment these two mismatched monsters met they couldn’t stand each other. Monsters University unlocks the door to how Mike and Sulley overcame their differences and became the best of friends.